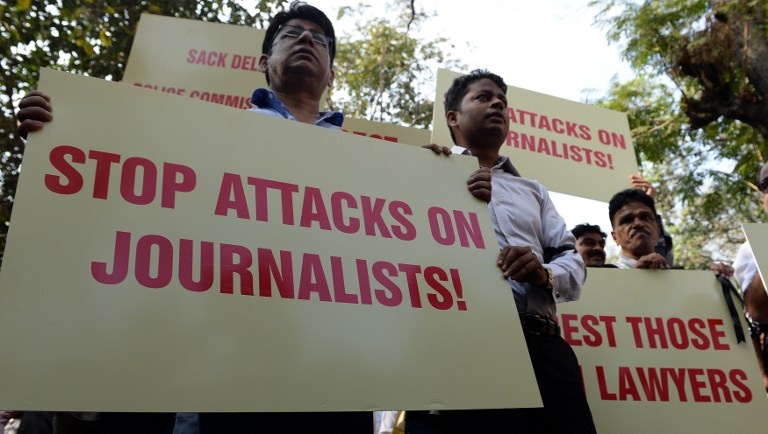 Indian journalists shout slogans during a protest to condemn an assault on fellow media workers by lawyers at a court in New Delhi earlier this week, in Mumbai on February 17, 2016. Delhi police carried out fresh raids in several Indian cities on February 17 as they stepped up a search for students in a controversial sedition case after the arrest of a student leader that has sparked mass protests. Photo: AFP / INDRANIL MUKHERJEE

There is no doubt that the media of South Asia is on a critical journey. It is a path that is full of hope for a new and emerging future, but it is also one loaded with challenges – both to the craft of journalism and to the way media workers operate day to day in the field through the stories they tell and the dangers they confront.

Standing boldly between intense geo-political challenges and the socio cultural issues that bind this region together, journalism in many cases is growing and evolving alongside new democracies and not without its share of issues.

This 14th annual review of journalism in the region, The Road to Resilience: Press Freedom in South Asia 2015-16, presents a picture of the media landscape that is both grim and defiant. With each year, this important record is created through the dedication, commitment and ongoing determination of the South Asia Media Solidarity Network (SAMSN). It represents a strong and uni ed voice on the issues that bind the region’s media and is a record of shared experience, strength and solidarity that has come to represent them together.

As we stand now, Pakistan’s media continues its stratospheric expansion, but in the midst of curbs and controls and ongoing safety issues. Nepal, Bhutan and Sri Lanka are treading a precarious path to finding credible and independent spaces for the media against economic challenge and political change – one that has promisingly seen the return of journalist exiles in the case of Sri Lanka.

Meanwhile, journalists in the world’s largest democracy in India are standing rm in the face of ongoing direct assaults, wage challenges and threats by governments, security forces and other political and religious powers. And sadly, Afghanistan has found itself in a new war on media as international support withdraws and the Taliban and the IS amplify their efforts at control as evidenced through the horrific suicide attack on Tolo TV workers in Kabul – the single deadliest attack on the country’s media.

But perhaps nowhere has the battle for freedom of expression been as acute and brutal in the past year as Bangladesh. As we prepare to launch this report, there have been two more horrendous murders of individuals working to push the boundaries of free expression– blogger Nazimuddin Samad and editor Zulhaz Mannan. They are among seven bloggers and journalists killed in the last year and form part of a broader, sustained project of silencing being ruthlessly conducted by fundamentalists and extremists that have turned the country into a killing eld for those who dare to speak with an alternate voice.

What is clear across our region is that regional and international condemnation is wasted without the will of a country’s leaders and legal apparatus to tackle the issues that threaten democracy’s fourth estate. We cannot simply step back from the reality that 31 media workers, including bloggers, have lost their lives in South Asia. This must change.

Without solidarity, journalists and media workers remain exposed to the sometimes lethal forces working to silence them. Across the region, there is cause for hope as media workers and the unions and bodies that represent them continue the ght for freedom.

In this report we take a deeper look at the growing issue of online violence against women in our special gender and media chapter. We also give special attention to challenged spaces and regions – including Bangladesh’s troubled online space as well as Chhattisgarh in India and Kabul and Kunduz province in Afghanistan which was occupied over 15 days in October 2015 by the Taliban.

Importantly, we also document the region’s progress in the fight against impunity for crimes against journalists. The world over, only one in 12 cases of journalists killed has been resolved, according to UNESCO. In South Asia, the situation is much worse.

Tackling this reputation will take more than strong words. In Pakistan there have been just three convictions in the 100 fatalities since the US-led war on terror began. For those fighting impunity the price can be high. But there have been positive signs with some arrests and convictions.

So too, as media and technology evolves, the diversity and possibility for South Asia’s media presents huge opportunities which journalists everywhere are embracing to traverse the physical and traditional borders that once separated them.

The Road to Resilience encapsulates a record of this past year and the work of many. We hope it will direct future campaigns and a stronger media for South Asia.