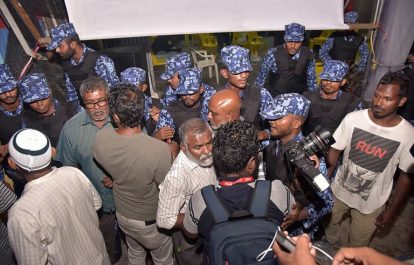 Amid the growing political crisis in the Maldives, the International Federation of Journalists (IFJ), Reporters Without Borders (RSF) and the Committee to Protect Journalists (CPJ) are deeply concerned by ongoing restrictions and threats on media and press freedom in the Maldives, and call on authorities to allow media to carry out work without reprisal.

The three international press freedom organizations jointly condemn ongoing threats to shut down media organizations in the name of national security during the country’s current political crisis and its declaration of a state of emergency. The media in the Maldives are enduring unprecedented restrictions, making it impossible to bring out necessary independent or critical reporting in the public interest.

Maldivian President Abdullah Yameen declared a 15-day state of emergency on February 5, after the country’s Supreme Court ordered the release of opposition political leaders and reinstated 12 suspended Member of Parliaments on February 1. The order effectively put President Yameen’s government in a minority. In a move directly threatening the independence of the judiciary, the government refused to respect the Court’s orders and subsequently arrested the Chief Justice and another judge. After this action, the remaining judges annulled the original order.

Two journalists working for the Agence France-Presse, Indian photographer Money Sharma, and British videographer Atish Patel, were arrested on February 9. One day earlier, the Ministry of Defense and National Security warned of action on parties found to have brought forward content impacting national security without a prior notice. The statement added that live shows and programs on media could “create chaos, confusion in public and create discord within the society”. Following the warning, the opposition-aligned Raajje TV suspended its regular broadcast ‘due to increased harassment, threats and intimidation’ and ‘unsafe environment for journalists to report freely and independently, and without fear’. It also said the Maldives Police withdrew security provided to the station, which has weathered several attacks in the past.

On February 4, the deputy leader of the ruling Progressive Party of Maldives (PPM), Abdul Raheem Abdullah, called on the security forces to immediately shut down Raajje TV, accusing it of giving airtime to the opposition leaders.

These restrictions come after the Maldivian media has already been forced to exercise the high level of self-censorship due to the draconian Anti-Defamation and Freedom of Expression Act.

The IFJ, RSF and CPJ reaffirm that amidst the ongoing political turmoil in the Maldives, it is critical for the media to report freely and without fear to ensure the public access to credible information. However, the level of threat to the media by the state agencies is dangerously high, making it impossible to ensure independent journalism. The current state of threats and repression directed at the media in the Maldives violate critical international standards of democracy and rule of law.

All threats and harassment to media in the Maldives should immediately stop and the state should act to ensure the safety and security of media and journalists.

We urge the Maldives to immediately take measures to ensure freedom of the press and safety of the media and journalists allowing them to report freely and without fear of prosecution or other consequences during this critical time for the Maldives democracy.