Press Trust of India sacks 297 staff in one day 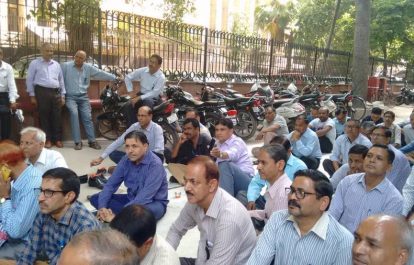 The Press Trust of India (PTI), the largest news agency in India, laid off 297 staff across the country on September 29. The International Federation of Journalists (IFJ) joins its affiliate the National Union of Journalists (India) and the Indian Journalist Union (IJU) in condemning the excessive actions of the company and calls for immediate government intervention and a thorough investigation into the legality of the unprovoked mass sacking.

A notice by PTI’s Chief Administrative Officer MR Mishra (dated Saturday, September 29), read: “The following employees whose names appear in the list displayed with this notice have been retrenched from the employment of the PTI with immediate effect.” The laid off staff are non-editorial and the management claimed that their posts – transmission supervisors, engineers, assistants and attenders, have become redundant.The Press Trust of India is regarded as India’s top news agency, run by an elected board of directors consisting of the country’s top media house owners. The decision to retrench employees came immediately, rather the same day after a change in the PTI Board, with Mr N Ravi, former Editor of the Hindu, taking over as its Chairman.

Letters were sent to the homes of targeted workers. PTI claims that dues have been directly transferred to individual bank accounts. It is also understood copies of the retrenchment letters were placed at the individual employees’ work stations. PTI, incorporated in 1947, is a non-profit cooperative of more than 500 newspapers; employs nearly 1,000 journalists and claims to cover more than 90 per cent news agency market in India.

The IJU said: “The way the management retrenched the employees by issuing a notice with ‘immediate effect’ and placing the retrenchment letters on the desk of the employees or putting them on the website was unethical, unheard of and smacked of sinister design. The IJU leadership was equally concerned that the management particularly laid off permanent employees under the Wage Board to not only weaken trade union movement in the media but perhaps to replace employees with contractual jobs so as the have a free hand to ‘hire and fire’ employees and give a go by to job security as provided under the law.”

NUJ(I) General Secretary Sheo Kumar Agrawal said: “The decision is arbitrary, unrealistic, unjustified and unwarranted. The PTI management suddenly announced retrenchment of approximately 300 media staff across India claiming the move will save money during the next financial year. The management’s argument does not make any sense because the management has set up a huge hierarchy of managers who claim a major share of the salary budget and none of them are being retrenched.”

Journalist unions and representative bodies across India have called out the company for the “illegal retrenchment”, with the Delhi Union of Journalists labeling the move “anti-labour and anti-media”. IFJ affiliates NUJI and the IJI and other unions, including the Federation of PTI Employees’ Union, have demanded that the retrenchment be withdrawn with immediate effect.

On Monday, October 1, the PTI employees union and other journalists organisations held a day-long dharna (sit in protest) in front of  PTI centres across the country, including the headquarters on Parliament Street in Delhi, protesting the “illegal” mass retrenchment.

According to reports, all but 52 of the news agency’s non-journalist staff have been terminated. The management has also come out with a 678-page document outlining that “PTI’s survival is at stake” and justifying the decision in order to keep the company financially viable.

The NUJ(I) added: “The decision means financial murder of media workers who have a major role in making PTI one of the most credible news sources in India.”

The IFJ joins IJU and NUJ(I) in expressing solidarity with the laid off staff.

The IFJ said: “This decision by the Press Trust of India defies accepted  labour conventions and the rights of workers. The IFJ strongly condemns the unilateral decision of PTI to gut the company of 297 staff without notice. Any discourse on financial cuts should follow a transparent, respectful and open procedure of negotiation and agreed compensation with employees and their union, with termination a last recourse. The IFJ demands immediate withdrawal of the decision and initiation of dialogue with staff and their union.”

Photo: One of the many dharnas (peaceful protests) held across India yesterday, following the mass sacking of 297 workers by the Press Trust of India. Credit: Newsclick