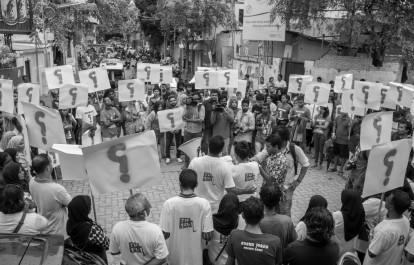 On February 5, 2016, UNESCO, the IFJ and the WAN-IFRA organized a conference ‘News Organisations Standing Up for the Safety of Media Professionals‘ at its headquarters with an aim of strengthening the safety of journalists globally by working out possible actions that could be carried out to ensure risk-free media environment.

The timing couldn’t be more perfect as it came just after launch of the IFJ’s 25th report on journalists and media staff killed which noted that at least 2,297 journalists and media staff have been killed since 1990, mostly for carrying out their professional responsibility and serving the public by providing the information. The report also notes that besides the high levels of violence on journalists, there is also rampant impunity with 90 percent of journalists murders, there is either little or no prosecution.

As IFJ President Jim Boumelha put it in the opening of the conference, the ‘media executives and journalists organisations need to work together to provide journalists with protection’.

He added that the safety crisis in journalism is the result of increasing dangers in journalism and the failure to implement international legal instruments which are meant to protect journalists, as civilians. “Our task today is to build the widest coalition to ensure these instruments are fought for and implemented,” said Boumelha in his speech.

In South Asia, the violence against journalists and impunity is both alarmingly high. Pakistan and Afghanistan are two of the world’s most dangerous nations for the journalists – and in 2015, Bangladesh and India saw at least a dozen murders of bloggers and journalists rising the alarm. For a long time, the South Asia has been the worst region in the world in terms of impunity for crimes against journalists. Despite all eight countries in the region being under democratic regimes for at least five years, the persistence of impunity has remained a big challenge for governments and democracy.

The IFJ has long been working in South Asia to support the journalist organizations to fight against the situation and supporting initiatives began by its affiliates and partners for safety and security of journalists and fight against impunity.

In 2014 and 2015, the IFJ has developed various safety training manuals; and conducted safety and security workshops for journalists in Afghanistan, Pakistan, Bangladesh and Nepal empowering journalists to cope with risky situation. Some of those workshops focused especially on the gender safety issues and digital security issues as female journalists face different set of safety challenges whereas the emerging technologies on the Internet has brought about new security challenges to journalists that they need to understand and minimize.

However, it’s sad to note that in South Asia, media organizations are largely ignorant of their roles and responsibilities in protecting the journalists and staff. During the workshops, journalists have shared experiences where they were asked to take risky assignments without their media organisations providing any safety formalities. The media organisations do not even provide basic safety and security orientation to journalists before sending them on the field with potential risks.

In the context, some of the recommendations from the Paris conference are more relevant to South Asia where the cooperation and coherent actions from media organizations to the journalist organizations are needed. The actions recommended by the conference include: establish clear habits, routines, protocols and systems (including insurance and regular training) to enhance safety, with clear responsibilities from the media organization and the reporter; institutionalize daily check-ins and provide back-up for reporters on dangerous assignments; have conversations between editors and correspondents before heading out to understand mutual responsibilities and what will happen if something goes wrong; and protect premises and facilities.

The conference also recommended that the media organizations and journalist unions provide training and mentoring to staff, fixers and freelance journalists on a variety of topics; sensitize media editors and managers on safety issues; work with NGOs to provide access to low-cost or free practical tools for journalists to be more prepared when it comes to safety, and create a website for consulting existing resources.

The media organizations should require risk assessments prior to deployment to understand the environment in which reporters will work, and to mitigate and reduce the risks they take;
not send staff to situations that are too dangerous, and be aware that taking stories from freelance journalists from those areas may constitute a double standard; consider whether publishing certain stories will put correspondents in danger, and allow the journalist to see the final copy and headline of the article before publication; and use smart preparation and new technology to support safety and save costs.

Under the solidarity and collective action needed, the Conference recommended:

The Conference also felt that there is need of awareness raising on the safety issues by telling stories of journalists, publicizing attacks on journalists; using the World Press Freedom Day and the International Day to End Impunity for Crimes Against Journalists to raise the issues; and condemning all acts of violence against journalists.