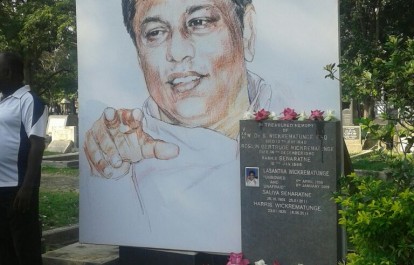 Eight years after the murder of The Sunday Leader editor Lasantha Wickrematunge, his colleague Dilrukshi Handunnetti remembers all that he stood for: truth, courage, and justice.

Way back in 2007, when I was assigned one of the biggest investigative stories I was ever to undertake, our editor Lasantha Wickrematunge sent me a text message with a smiley: “Make your MIG story bigger than Hiroshima,” it read. Hiroshima it was, as a story, explosive in ways unimagined.

It is a privilege to share my perspectives on Lasantha the editor who effortlessly groomed his diverse team, his true legacy as I see it, and something we may wish to reflect upon today as we call for justice and closure.

At The Sunday Leader, what we never lacked was excitement. There was never a dull moment. There was always the thrill of the chase, gripping stories and the accompanying high. Today, we are left with a deep sense of regret for the collective loss, the trauma, the agony, and the long wait for justice for a man so wronged.Yet, there was a time when we had limited resources but were happy to be part of publication unlike any other, with a unique identity: one of defiance, of dissent, of courage. We belonged to that editorial that throbbed with excitement only to have our laughter robbed on 8 January 2009.

Yet, there was a time when we had limited resources but were happy to be part of publication unlike any other, with a unique identity: one of defiance, of dissent, of courage. We belonged to that editorial that throbbed with excitement only to have our laughter robbed on 8 January 2009.

As an editor, Lasantha trusted his team, in its ability and had a studied understanding of each of us. He managed our differences, resolved our many conflicts, both personal and professional, with the biggest smile. We were not an easy team. But we were a good one. Together we told some great stories.

Personally, the best gift Lasantha gave me was to pursue my own journalistic dreams. He clipped no feathers. He did no hand-holding. He did not try to remould me into something I was not. He was happy to simply let me be myself and choose my assignments.

When I joined The Sunday Leader, I was reporting for a wire service. The morning hours had to be dedicated to compiling a daily brief, to pitch and then to file stories. This required time. This was of course long before desks began assigning reporters via Whatsapp groups. All Lasantha asked me in return was to also file those stories, if appropriate, for the newspaper and to ensure that The Sunday Leader assignments were prioritized.

Lasantha never stopped me from doing a story, even when he disagreed with the story line I took. We have printed opposing views on a topic on opposite pages. I was not asked to pull the breaks on a story, even when it caused him some embarrassment. There had been many such moments.

We wrote about those whose rights were violated: the abducted, extorted, maimed, killed, displaced and disaster-affected. We were a formidable voice when silence was fast becoming the norm as threats to independent media increased. We mirrored the pain of a protracted conflict and the lack of space for dissent. There was a price to pay, and ultimately he paid it with his life.

Many have been quick to condemn the Leader brand as sensational or “advocacy journalism”. But few could disagree that those were stories that would have otherwise got buried in the sands of time, or that many others lacked the courage to tell those same stories.

Two years ago, there was a decisive political moment. Based on astrological advice, the former administration fixed the date for the next presidential election on January 8, 2015, coincidentally, Lasantha’s sixth death anniversary. I dared to hope that this time, Lasantha might reach from his grave and seek justice. Was he successful, I ask today, also the second anniversary of the government of President Maithripala Sirisena. Has his government served the cause of justice enough?

And that is the point. Truth and justice continue to be illusive not only to Lasantha but to many thousands of Sri Lankans, two years after a regime change. Seeking justice for Lasantha and other media colleagues continues to prove a daunting task. We have a new government which came into office with a firm pledge to pursue justice. We still haven’t seen the end to a single investigation, though new twists are being added to each bloodied tale. These silences and delays only perpetuate the culture of impunity and render useless the quest for justice. It breeds mistrust.

The day after Lasantha’s murder, on Friday January 9, we published an article listing all Sri Lankan journalists and media workers killed within a decade, all waiting for justice. We were adding Lasantha’s name to it. It made an unfortunate but accurate prediction that Lasantha’s too would join the long list of Sri Lanka’s unresolved murders.

It becomes a double tragedy when such a fate befalls a journalist who took up unpopular causes, raised critical issues of justice and demanded accountability.Finally, a new autopsy is called for to determine the cause of Lasantha’s death, the causes recorded in the contradictory reports being similar as chalk and cheese. And we wait. And we hope.

Finally, a new autopsy is called for to determine the cause of Lasantha’s death, the causes recorded in the contradictory reports being similar as chalk and cheese. And we wait. And we hope.

The reality is that governments and politicians are happy to use the media and journalists. Likewise, Lasantha was used and his death too was used. His murder created a strong political platform; a new government came into being. But there is no rush or a visible sincere effort to deliver justice to him, to his grieving family, his friends, colleagues and seekers of truth and justice in our country.

What we have instead, are people who eagerly run away with his legacy, for fame, for money, for privilege. He has been convenient in the scheme of things for many.Still, death has not been able to rob Lasantha’s legacy. It is found in the volume of stories he generated with his team, some unpopular stances he took and defended to

Still, death has not been able to rob Lasantha’s legacy. It is found in the volume of stories he generated with his team, some unpopular stances he took and defended to death, especially on matters of state accountability and corruption. The journalists whose careers he moulded, including mine; along with examples of courageous journalism when the undisputed source of his death was the ruler of the day.

Many of our stories like the MIG investigation proved disturbing and earned us powerful enemies. There was litigation, threats, arson attacks and finally Lasantha’s death. Their collective impact was devastating; institution- breaking, life-changing and life-taking. But those stories were written with passion. Those stories were evidence-based. Of course they were inconvenient for some.

At the end, many of these stories have stood the test of time. Several of them form the basis of criminal investigations today. Then, it would be the ultimate compromise to apologize for the publication of the same stories, because we are cash-strapped and belong to a small industry, because it is convenient and because the odds are high.

The Sunday Leader’s journey was never an easy one. I don’t think Lasantha expected it to be so. Except that when Lasantha was removed from the equation, we lost our sails. And that’s huge. But the tragedy cannot be allowed to defeat the stories he told. Likewise, seeking justice for him and all others before him can never be an easy task. But a process has begun. We continue to hope, though with each passing day, our faith in the system dies a little.

We journalists get traded all the time. Our media houses pursue different agendas at different times. Journalists who do the reporting hardly have a say when institutional stances change. They only get compromised in the process, along with the stories. Yet, there is only one thing that has lasting value in journalism: the integrity of content and that of the individual journalist. When retracted, stories become lies.

Let it not be forgotten that our editor died for those same stories.