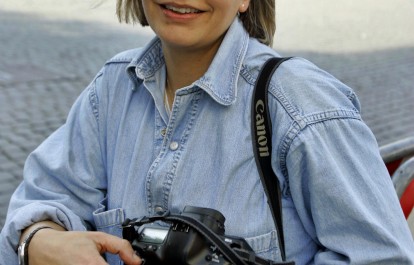 The International Federation of Journalists (IFJ) and its affiliate the Afghanistan Independent Journalist Association (AIJA) strongly condemn the shooting attack that tragically killed an AP photojournalist and injured another journalist in Khost province, Afghanistan on Friday, April 4. She became the fourth journalist fatality in Afghanistan this year as the country headed to the polls.

According to reports, an Afghan police officer shot dead Anja Neidringhaus and badly injured reporter Kathy Gannon when they arrived at the premises of the district government in a convoy to cover the preparations for the country’s presidential election on Saturday, April 5.

Niedringhaus died at the scene from wounds to her head while Gannon was taken to hospital after being shot in the wrist. She later underwent surgery and was described as being in a stable condition and has been talking to medical personnel. Both journalists had been long-time correspondents in Afghanistan and were highly regarded in the country.

Niedringhaus, 48, an internationally acclaimed photographer, received numerous awards for her works including the 2005 Pulitzer Prize for her reporting on the war in Iraq. She has also published two books. The IFJ, the European Federation of Journalists (EJA) and the AIJA express deepest condolences to Niedringhaus’ family and wish for a speedy recovery for Kathy Gannon.

The AIJA said: “We strongly condemn this awful armed attack. This savage killing comes as we witness increasing hostility toward free media and freedom of speech in our country. With this latest killing the number of journalists murdered in the past three months has grown to five,”

“This incident demonstrated that the Afghan government has failed to provide security for journalists in the country.”

On January 23, the body of Noor Ahmad Noori, a Busd Radio journalist and former New York Times employee, was found in the Karte Lagan area of Helmand. Noori had been kidnapped and hanged before his body was disposed of. On March 11, the Swedish-British radio reporter Nils Horner was killed in downtown Kabul while leading Afghan reporter Ahmad Sardar was gunned down with his wife and two children at a Kabul hotel on March 20.

On March 20, Sardar Ahmad, a 40-year-old senior reporter with the Agence France-Presse (AFP) Kabul bureau was killed alongside his wife and two of his three children as they sat down to dinner in the Serena Hotel in Kabul. The Taliban, who had vowed a campaign of violence to disrupt the upcoming Afghanistan Presidential election, claimed the responsibility for the attack.

The IFJ said: “The IFJ has long warned of the immediate and dire threats to journalists and media workers in Afghanistan in the lead-up to the election and called for additional measures to ensure their safety. This deathly toll now sadly shows the world that Afghanistan is a deadly place for journalists and that even in the protection of government forces, no one is safe. A policeman opening fire at renowned photojournalists clearly shows the terrible lack of government commitment to journalists’ safety.”

The IFJ is calling for strong action and rapid investigation into the circumstances that led to Neidringhaus’ murder on Saturday and that of the three other journalists killed this year.

“This is a dire situation for journalism in Afghanistan. It will take six weeks for Saturday’s election results to come in and the IFJ strongly urges the incoming Afghan President to immediately work towards establishing and maintaining a safe environment for media workers.”