Right to Information in Sri Lanka 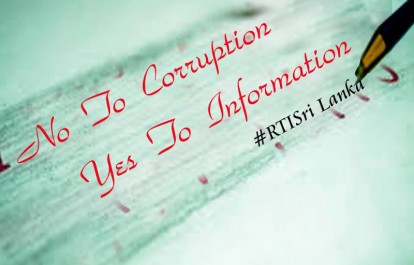 Right to Information (RTI) legislation was unanimously passed in Sri Lanka’s Parliament last week (June 24) without a vote. It sounds easy and inevitable when framed thus, but that one sentence masks decades of activism and advocacy to pass RTI to no avail, and strong pushback from government predominantly based around national security issues. It was unlikely that during war, Sri Lanka would have passed this legislation. Yet even today, seven years after the war ended, the default mode of operation for government is to hoard, retain, hide and obscure information. The law will invariably engineer great resistance at all levels of government and state administration.

RTI is progressive because it places the onus on public institutions to respond to queries by the public, opening them up to a degree of legal scrutiny hitherto unprecedented. The law is disruptive precisely because of this. Decades of a culture of secrecy, of hoarding information, of not releasing information in the public interest is now turned on its head. Public institutions will have to proactively disclose information to the public, and also disclose when requested by the public. To do this, information officers will be appointed – and they will face the gargantuan task of dealing with requests from the public for information there may not even be official records around.

Our bureaucracy is based on who knows whom, and what one knows about another. It is based on clientalism and nepotism, with systemic record keeping more to thwart and stifle genuine accountability, over any interest in efficiency and effectiveness. RTI turns this on its head too. Comprehensive records management now trumps favour, personal relations and convenient amnesia. And it is not just the hoarding of files in gunny bags in a dark basement. RTI emphasis that records must be kept in an easily and effectively retrievable manner that is systematic, without being hostage to the often mercurial and entirely subjective “filing systems” of individuals who happen to inhabit a particular office over a period of time.

Beyond all this is how RTI can strengthen and support civic media as well as investigative reporting. In a regular column to the newspapers, I wrote that RTI comes to Sri Lanka at a time when we are on the cusp of almost ubiquitous connectivity – from continued upgrades of existing telecommunications infrastructure to the advent of new technologies like Google Loon which promise high speed wireless connectivity from all corners of the country. I argued that the implementation of RTI in Sri Lanka needs to be digital and mobile first, enabling citizens to interact with and ask questions from government, using the provisions in the law, through their mobile phones, tablets and desktop browsers instead of resorting to paper, pen and post. It is here that I foresee the greatest challenges around RTI’s implementation, which I frame as a crisis of the imagination.

Used to being in the opposition, and stuck in survival mode, civil society now needs to use RTI to frame requests from government in support of their work. This means understanding the law, and using it, instead of fighting against unjust laws, which has largely defined the work of rights-based civil society advocacy and activism in Sri Lanka. The emergence of ‘solutions based journalism’ is a school of practice and thought that holds great promise for the practice of journalism under RTI, which is anchored to generating ideas to solve key issues, rather than just flag what’s going terribly wrong. The generation of new ideas and innovation, it stands to reason, can only gain from information around what decisions have been taken in the past and why, which is where RTI comes into play. Questions that interrogate structures, decisions, mechanisms, institutional history, purchases, the hiring and firing of individuals, the non-disclosure of interests and the under-utilisation of assets, the awarding of tenders to the selection of service providers, measuring key performance indicators around promises made and asking information that impacts the families of the disappeared – this is in the future all possible in Sri Lanka because of provisions in our RTI legislation.

At least, it is in theory. Information in the public domain does not automatically engender the political will to address official wrongdoing or maladministration. Oftentimes, information secured by RTI will require more requests to be made possibly from other public institutions, cross-verification, some translation and finally, contextualisation. Ordinary citizens may demand information, but government is not bound to provide the information in a manner that is easily comprehended. This is why it is so important to strengthen civil society and independent media to use RTI to transformation information to knowledge, and raw data into context. This is where journalists, including citizen journalists, step in. While RTI’s importance extend far beyond media and journalism, journalists and acts of journalism by citizens can showcase the power and potential of RTI to prise open official mechanisms.

Accountability is not a given today, and will never be. Just like the decades of activism and advocacy, against the most determined adversity that was required before RTI was passed in Sri Lanka, the litmus test of legislation will be in its fullest implementation. Else, all this hype and hoopla would have been for nothing.

(The author, Sanjana Hattotuwa, a founder of Groundviews, Sri Lanka’s first citizen journalism website and advocated for RTI legislation. He has explored and advocated the use of Information and Communications Technologies (ICTs) to strengthen a just peace, reconciliation, human rights and democratic governance.)