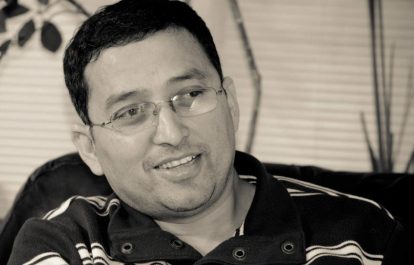 Ujjwal Acharya: In February, 2005, King Gyanendra cut off all communication channels, including the internet, for weeks. You were the editor of The Kathmandu Post daily newspaper. How do you remember the time?

Prateek Pradhan: I very vividly remember the day. The King was addressing the nation at around 9:30 am and he has just announced that he was taking over executive powers. It was shocking, as the country was a democracy and we never thought at that juncture that King Gyanendra would take such a bold step. At that time, I was editor of the Kathmandu Post, and I got a call from the royal Secretariat and was summoned to a meeting. The Secretary also told me that that was the last phone call he was making.

We (editors) went to the palace to meet the Secretary, and we protested. He threatened us that if we didn’t comply with the authorities, anything could happen to us. At that time, all phone lines were cut, internet was cut, and there was a kind of chaos as people didn’t know what was happening. Military surrounded all media houses; young military officers were going through all the contents we were writing. It was very difficult time for media and journalists. It was very very difficult to publish newspapers.

UA: Why you think the King then decided to cut off the communications and internet the first thing after he assumed the executive power through a coup?

PP: I believe that was a very wrong move because the coup against a democratically elected government was bound to be big issue internationally. He claimed that he was assuming executive power for the betterment for the nation but nobody believed him as his very first step (blocking communication and internet shutdowns) was undemocratic.

UA: Was the internet shutdown to silence critical voices?

PP: I think that was the reason. It was to deny people the opportunity to discuss the issue and prevent them from assembling to protest against it.

UA: What was the impact of the internet shutdown on the media?

PP: It was very, very difficult. At the time, all our correspondents were using the internet to send news and it became very chaotic to manage the newsroom. We were not in a position to send reporters to events. It was like sitting in a dark room not knowing what’s happening around. I’m proud that we didn’t stop the newspaper although we immediately cut down supplements and the number of pages. We didn’t have enough content to fill the pages, and the photographs were not coming. It was like doing journalism a century earlier.

UA: Do you think internet shutdown is an issue of freedom of expression?

PP: I believe so. The internet is like the water pipeline, electricity, roads, health and education. Until you provide a facility to the people, they may keep demanding it; but once they get the facility, you can’t cut off the facility as it becomes people’s right. Internet is similar, once people get access to it, you can’t cut it off. In today’s society, internet is much more important than other infrastructure.

UA: Should journalists and journalist unions monitor and struggle against internet shutdowns?

UA: What will happen if internet is cut off today?

PP: It is not possible, and it should not happen. Maybe for a short period, somebody may come up with this crazy idea but to be vigilant we need to think of alternative ways to access internet while making it impossible for governments to cut off the internet.