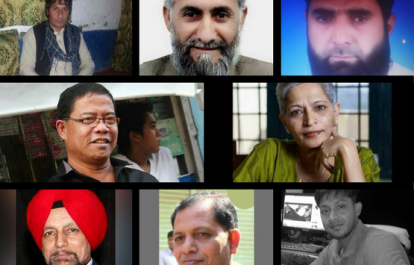 The South Asia Media Solidarity Network (SAMSN) and the International Federation of Journalists (IFJ) demanded concrete action from the governments of South Asia to end impunity for crimes against journalists. South Asia has failed to provide justice for hundreds of journalists and media workers who have been killed merely for carrying out their duties.

On the UN International Day to End Impunity for Crimes Against Journalists, the IFJ called for strengthening the international legal framework and national protection mechanisms to ensure greater media safety. The IFJ launched a campaign end impunity focusing on seven countries including Afghanistan and Pakistan in South Asia. Other countries where the IFJ is focusing are Mexico, Iraq, Yemen, Somalia, and Ukraine.

“The failure to resolve cases of killings of journalists has created a state of lawlessness in both Afghanistan and Pakistan and perpetrators fear nothing while killing journalists to silence them. This should stop as soon as possible to ensure an independent and vibrant media, which is a prerequisite for a vibrant democracy.”

“With hundreds of murders, and no justice in most of the cases, impunity is rife in South Asia,” the SAMSN added. “South Asian states have failed to provide adequate security for journalists, and shown reluctance to investigate killings and introduce stronger legal frameworks.”

The IFJ Asia Pacific, in coordination with its affiliates and SAMSN partners, is launching the annual three-week End Impunity Campaign to advocate for justice and actions on attacks against media workers. The campaign launches today and will run until November 23, the 8th anniversary of the Ampatuan Massacre in the Philippines.

IFJ President Philippe Leruth said: “The levels of violence in journalism around the world make a mockery of the high-minded intentions behind initiatives such as the UN Day to end impunity. As long as they are not acted upon by holding accountable those who commit these crimes, there will remain an open season on journalists and media professionals.”