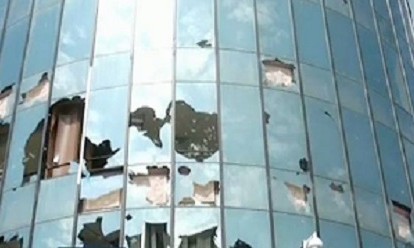 It is the second time that the Geo News TV building has been attacked in a fortnight by demonstrators of the Pakistan Tehrek-e-Insaf (PTI) and the Pakistan Awami Tehreek (PAT). Demonstrators pelted stones at the building, breaking a number of windows and also vandalized vehicles of the media.

Following this week’s attack, the PFUJ held a rally outside the Geo News TV building in Islamabad against the continued harassment of Geo News journalists and staff. Demonstrators who have been protesting against the Pakistani Government since August 14 have repeatedly harassed Geo News staff and other journalists and media workers from other outlets.

On August 30, demonstrators attacked the office of Geo News TV in Islamabad, pelting it with stones. Some stick-wielding protestors reportedly also attacked the satellite van of Geo News as the staff in the building struggled to escape.

The PFUJ said: “The political parties like PTI and PAT are using derogatory language against Geo, which is a direct attack on journalists.”

The PFUJ demanded that the government should take notice of the continuous stone pelting incidents on Geo News TV building in the capital.

The IFJ said: “The repeated attacks on Geo News clearly show that the anti-government demonstrators are intolerant to the media’s role in reporting these events critical voice, and are resorting torting to unjustifiable undemocratic acts. Importantly, the attacks on Geo represent an attack on Pakistan’s media as a whole.”

The IFJ calls for all journalists, regardless of where they are employed, to condemn these assaults in the strongest way and for the media to stand in solidarity against to defend their right to report.

The IFJ has condemned these attacks on Geo News and called on the government and the leaders of the PTI and PAT to provide sufficient security and respect for the media while the demonstrations continue.”