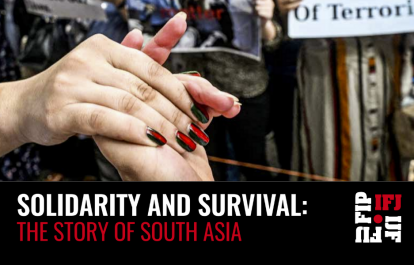 The IFJ’s South Asia Press Freedom Report for 2021-2022 (SAPFR21-22) includes analysis on the situation of press freedom and freedom of expression in each country in the South Asian region. With support from the United Nations Educational, Scientific and Cultural Organisation (UNESCO), European Union (EU), Norsk Journalistlag (NJ) and the National Endowment for Democracy (NED), the report highlights the stories of journalists in exile and the battle being waged to maintain digital freedom in South Asia as the media landscape transforms in the wake of the Covid-19 pandemic.

A total of 210 cases of media rights violations were recorded in the period covered by the report, including 23 journalist lives lost. 131 media workers were detained or jailed in South Asia, a dramatic increase on the 63 arrests recorded this time last year, evidence of authorities’ increasing propensity to silence critical reportage through intimidation, interrogation, and detention.

The SAPFR21-22 captures a period of major political and economic upheaval, from the takeover of Afghanistan by the Taliban in August 2021 to the massive democratic protests against the Sri Lankan government in April 2022. The report’s country chapters highlight rising issues of impunity for crimes against journalists, the introduction of stringent media laws, media sustainability, digitalisation and gender-based violence in the media.

Despite these challenges, the strong and consistent work of unions and press freedom organisations across South Asia have resulted in a number of positive achievements that have worked to better protect the safety of journalists and their rights at work.

The report’s 20th edition features interactive data visualisation for the first time, displaying trends in the numbers and types of media rights violations from 2016 to 2022, categorised by UNESCO’s Journalists’ Safety Indicators (JSIs).

The SAPFR21-22 will be formally launched on May 4 at UNESCO’s 2022 World Press Freedom Day celebration for South Asia in Colombo, Sri Lanka, by representatives from the IFJ and its Sri Lankan affiliates.

The release of the report coincides with the launch of the IFJ’s global campaign to combat journalist surveillance. On May 3, the IFJ and its affiliates urged international governments and bodies to work together with journalists’ unions to develop strict regulations that ban surveillance of journalists and recognise the inviolability of journalists’ communications.

The SAPFR21-22 is now available online: Solidarity and Survival: The Story of South Asia

Individual country chapters are also available to download below: