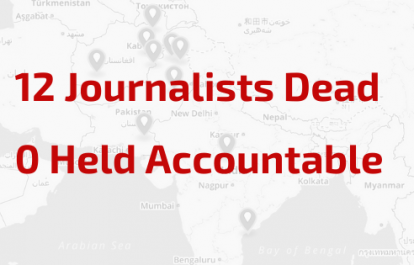 The International Federation of Journalists (IFJ) says 12 journalist deaths this year in South Asia are yet to have the murderers identified, let alone punished, pointing to an abject failure by governments to deal with a crisis of impunity in the region. The IFJ and its South Asia affiliates condemn ongoing impunity for crimes against journalists in the region. On the International Day to End Impunity today, the IFJ along with the South Asia Media Solidarity Network (SAMSN) call on governments and authorities to expedite investigation of these cases and increase protections for journalists.

The IFJ monitors media violations across South Asia, including a list of journalists killed in South Asia.

The IFJ recorded two journalist killings in India in 2019. On October 14, unidentified assailants stabbed and killed K Satyanarayana, an Andrah Pradesh journalist in India – just a month after he was attacked in a separate incident. Earlier in the year on June 19, Chakresh Jain, a journalist for Hindi daily, was burned to death.

In Pakistan, Zafar Abbas, a journalist affiliated with 7- News was killed by an unidentified group following his kidnap on September 12, 2019. Mirza Waseem Baig, a reporter for 92 News Channel, was murdered on August 30 while attempting to cover a story on a criminal gang. Muhammad Bilal Khan, a journalist and blogger from Islamabad, was stabbed to death on June 16. Two other journalists from Pakistan; Ali Sher Rajpar and  Malik Amanullah Khan were also killed in 2019.

According to IFJ’s monitoring, Afghanistan witnessed the killing of five journalists in 2019. The first recorded incident was Jabid Noori, who was murdered after being abducted by the Taliban in Afghanistan’s western province of Farah. Nader Shah Sahebzadeh, a talk show host for Radio Gardez Ghar was found dead on July 13 in Gardez, the capital of Paktia province. Journalist Sultan Mohammad Khairkhah was shot and killed while driving to work on March 17 in Khost, south eastern Afghanistan.  Two journalists, Shafiq Aria and Rahimullah Rahmani lost their lives when gunmen stormed Radio Hamsada, a private broadcaster based in Taloqan, the capital of Takhar provincein February 5, 2019.

IFJ’s South Asia affiliates criticize government failures in these cases and a reluctance to find and hold perpetrators accountable. The Free Media Movement (FMM), an IFJ affiliate in Sri Lanka, expressed its displeasure for the Sirisena government’s inability to provide justice in long-standing journalist murder cases in the country. Sri Lanka’s media unions and representative organizations continue to call for the appointment of a full-fledged Presidential Commission to investigate and address these crimes but this is yet to happen.

The FMM said: “On the day of The International Day to End Impunity for Crimes against Journalists, Free Media Movement urges the government of Sri-Lanka to end Impunity by prosecuting crimes against journalists.”

The Indian Journalists Union (IJU) criticized the Modi national government and state governments for the inability to guarantee journalist’s right in India and urges that killers and attackers of journalists must be brought to book and adequate compensation given to victims and their families.

The IJU acting president, Geethartha Patak, said: “We want investigation to the murder of journalists and to punish the guilty”.

The Pakistan Fedderal Union of Journalists (PFUJ), President GM Jamali and Secretary General Rana Muhammad Azeem strongly demands the Government of the Pakistan to provide justice to the bereaved families of the killed journalists and those who were injured in different incidents. The PFUJ and the families of the affected journalists had been protesting and moving their cases in the police departments and courts but the end result had been the impunity. The affected journalists are yet to receive justice.

The IFJ is campaigning to End Impunity for Crimes against Journalists. The campaign aims to hold governments and de facto governments accountable for their record on tackling impunity and to denounce all crimes targeting journalists that remain unpunished. The campaign will run from November 2 to November 23.

The IFJ said: “We denounce all crimes targeting journalists that remain unpunished and urge the South Asian Government to end impunity for attacks on journalists. Further, we urge the governments of South Asia to investigate the brutal murder of journalists and hold those accountable.”