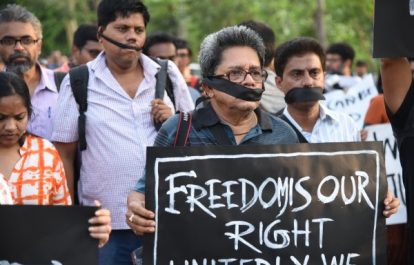 Welcome to the monthly e-bulletin of the South Asia Media Solidarity Network (SAMSN). The next bulletin will be sent on June 15, 2018, and your inputs are most welcome. 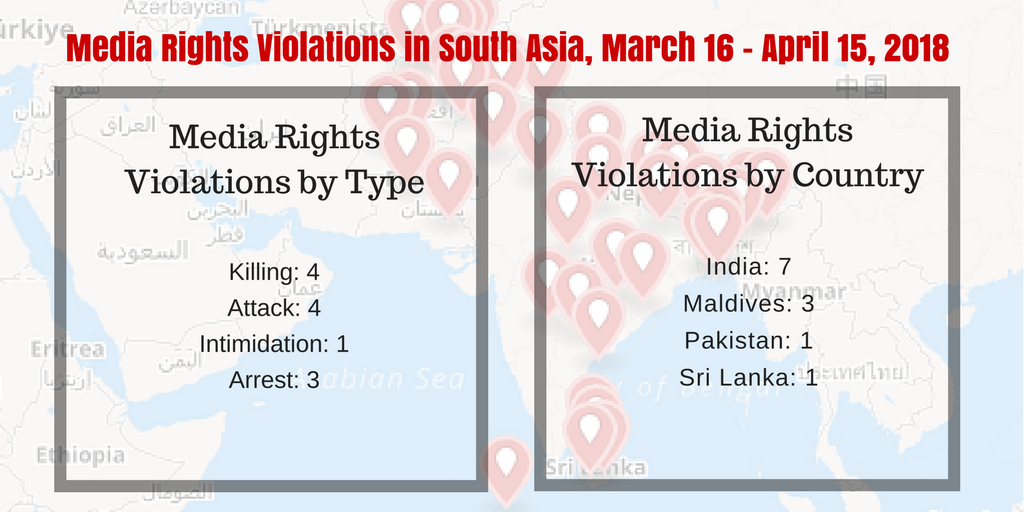 On March 25, Naveen Nishchal from Dainik Bhaskar and Vijay Singh, who worked for a Hindi magazine, were killed when the motorbike they were travelling on in Bihar state in eastern India was hit by a car. The car was driven by a former village head, who has several criminal cases against him. Locals set the vehicle on fire after the incident. Nishal’s family say that he had received threats in the days preceding his death.

The following day, Sandeep Sharma, an investigative journalist in Madhya Pradesh in central India was crushed by a truck and died in hospital. In CCTV footage of the incident, the truck can be seen making a sudden swerve and crushing Sharma on a motorbike. Sharma had recently done two “sting” investigations about sand mafia for a regional TV station, News World, and made allegations about the involvement of police officials in the illegal sand-mining mafia operations in the state.

Sharma had reportedly sought police protection following the publication of the reports, but Shailendra Singh Khushwaha, the deputy inspector at the Bhind police station confirmed that the protection hadn’t been provided. Special probes have been ordered into the two incidents in Bihar and Madhya Pradesh. More here.

Pakistani journalist, Zeeshan Ashraf Butt became the second journalist killed in Pakistan this year, when he was shot dead on March 27.  Zeeshan, a 29-year-old journalist with Urdu daily Nawa-i-Waqt and former chairperson of the Sambrial Press Club, was in Begowala on a personal visit. During his visit he met with Imran Cheema, chairperson of the Begowala Union Council. An argument broke out over a monetary dispute, and Cheema reportedly opened fire on Butt while he was on the phone complaining to a local representative. He died at the scene and Cheema fled.

The family of the slain journalist claimed that he had gone to the Union Council office upon some complaints from the local shopkeepers about a new tax imposed by the UC chairman. His brother alleged that the UC chairman was angered by his questions and opened fire on him. The police have registered a First Information Report (FIR) and are investigating the incident. More here.

Delhi police assaulted two women journalists and snatched away the camera of one while they were covering the demonstration organised by students and teachers of the Jawaharlal Nehru University in New Delhi, India on March 23. One male journalist was also beaten up and sustained injuries.

Students had organised the march to protest against a number of university policies, and also against alleged sexual harassment by a professor. The police had halted the march by using water cannons and batons against the demonstrators, tearing the garments of women protestors and roughing up many. Anushree Fadnavis, a photojournalist with the Hindustan Times daily, was roughed up and her camera was snatched away by policewomen. More here.

Photojournalist Biplab Mondal of The Times of India daily was forcibly undressed, illegally confined and beaten while other journalists and photojournalists were attacked in Alipore, Kolkata, West Bengal on April 9 while they were covering the filing of nomination papers for the polls to the local bodies (panchayats).

Other journalists, including ETV’s Manas Chattopadhyay, were also attacked and forced to delete pictures from their mobile phones. Chatterjee sustained injuries on his right hand. The journalists alleged that the police were present but did not intervene to stop the violence. More here.

A mob shouted slogans and set off firecrackers at the main gate of the Sirasa TV in Colombo, Sri Lanka on April 4, 2018 in protest against the channel’s coverage of the no-confidence motion against Prime Minister Ranil Wickramasinghe which was defeated in the parliament.

The mob gathered at the main gate of the office complex of MTV Channel after the no-confidence motion was defeated, and shouted slogans, setting off firecrackers for about an hour. MTV Channel, a private media company, owns three national television channels including Sirasa TV. As a result of the mob gathered at the main gate, the media staff were unable to exit the office complex. The police later dispersed the mob. More here.

6. Journalists arrested in continuing crackdown in the Maldives

The police arrested senior video journalist Mohamed Wisam and Head of Programmes Amir Saleem with court orders on March 16 after the ruling Progressive Party of Maldives (PPM) leaders accused Raajje TV of producing and uploading the YouTube video. The video showed three masked people in police uniform saying that they would join the opposition rally. On March 18, the Criminal Court remanded Wisam and Saleem for 10 days in custody. They were released on bail on March 27 after the police failed to produce any proof in court.

Journalist Mohamed Fazeen was arrested on allegations of defying police orders during the opposition parties’ protest demonstrations in Male’. He was handcuffed and taken into custody by traffic police. Fazeen was released on March 17 after more than 24 hours in detention. More here.

The Information and Broadcasting Ministry of India on April 4 formed a committee to devise rules to modulate news portals and media websites. This came just a day after the Centre recalled its directive regarding fake news after criticism.

According to the Ministry’s letter, the 10-member committee includes secretaries of the ministries of information and broadcasting, electronics and information technology as well as home. It will also have secretaries from the department of legal affairs and department of industrial policy and promotion as members. Read more here, here and IJU statement here.

a. Spreading awareness about sexual harassment

Despite the fact that sexual violence and harassment are rampant, there is very little awareness about it, says Lubna Jerar Naqvi of Karachi Union of Journalists in Pakistan who is doing her bit to raise awareness. Read more.

9. Is India an unsafe place for journalists? (DW)

Three journalists have allegedly been killed for reporting on corruption in the Indian states of Bihar and Madhya Pradesh. Their deaths underline dangers faced by journalists in the country, where questioning authority is clearly extracting a price. Death may have become a consequence that journalists, writers, and whistle-blowers will now face for challenging powerful vested interests or for expressing dissent. Read more.

Pakistan’s largest television network Geo, says it has been forced off the air by cable operators in most parts of the country, in a move widely seen as being forced by the military as it flexes its authority over civilian institutions.

In the first week of March, Geo News was shut down in cantonment areas across the country and residential neighbourhoods that are administered by the military. This month, all Geo channels started being blocked across the country by cable operators. The network’s channel assignment on the cable distribution network has also been lowered. The Pakistan Electronic Media Regulatory Authority has insisted that it is not behind the move, and put out a notice for cable operators not to disrupt Geo’s transmissions. Read more.

11. The Hard Limits of Pakistan’s Media Freedom (The Diplomat)

Although fatal attacks on Pakistani media personnel by violent extremists have significantly declined over the past few years, journalists these days feel more intimidated by state surveillance, threatening telephone calls, beating on the roads, or abduction by “unknown people.” While media houses are treading carefully to safeguard their corporate interests, media workers seem more concerned about their physical security and that of their families. The ultimate victim is freedom of expression and association and a journalist’s handiest tool is to observe self-censorship. Read more.

Selvarani Sahadevan is still seeking justice for her son nearly 11 years after he was shot dead by unidentified gunmen in Sri Lanka. The retired principal of Jaffna Hindu Primary School made a formal complaint to the Sri Lanka Human Rights Commission in 2007 to bring the perpetrators to court but has still had no positive response. Sahadevan Niluckshan, a 22-year-old media student at Jaffna University’s media research and training centre, was murdered on Aug. 1, 2007, by gunmen on a motorcycle in front of his house in Kokuvil West in Jaffna. Read more.

A recent week-long shutdown of several popular Web-based services in Sri Lanka was intended to clamp down on mob violence, but the government action had several unintended consequences. The shutdown affected Facebook, WhatsApp, Instagram, and Web-based calling service Viber. The services shut down on March 7 and were restored on March 14 and 15. Researches have pegged the economic cost of the partial shutdown in Sri Lanka at USD 30 million. Read more.

Sri Lankan Prime Minister Ranil Wickremesinghe said that the government is contemplating introducing a Freedom of Speech Act as one of the ways in which to tackle racial and religious unrest. The Prime Minister said Sri Lanka is looking at this option and also other alternatives. Read more.

The Hong Kong Bapist University Journalism Fellowship Scheme for mid-career journalists from Asian countries and territories has opened a call for applications. The two-month residential fellowship offers opportunities to journalists to strengthen their professional skills, exchange experience and ideas with colleagues from different backgrounds and from other parts of the continent, enhance knowledge and understanding of hot issues and topics in the region and build friendships and professional networks. Application deadline: April 30. Read more.

*****
SAMSN is a group of journalists’ trade unions, press freedom organisations and journalists in South Asia that works together to support freedom of expression and association in the region.