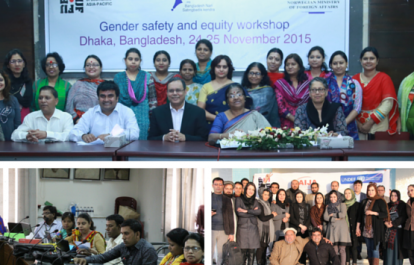 Welcome to the monthly e-bulletin of the South Asia Media Solidarity Network (SAMSN). The next bulletin will be sent on January 15, 2016, and your inputs are most welcome.

On November 2, the IFJ launched its annual #EndImpunity campaign calling for action to end impunity for crimes against journalists. The 2015 campaign was the most successful to date, with affiliates across the region taking a stand to demand action from local governments and media organizations.

The IFJ Asia-Pacific campaign focused on the issues impacting on press freedom and journalist safety across the region. The campaign ran from November 2 until November 23, and focused on India, Pakistan and the Philippines, where government authorities have consistently failed to display a genuine commitment to ending impunity and to bringing perpetrators and masterminds to justice.

Week 1 of the campaign called the governments of India, Pakistan and the Philippines to account. Week 2 featured the launch of Without a Trace: Media workers missing in the Asia-Pacific. Week 3 focused on the Philippines, which remains one of the world’s worst impunity havens for attacks against media workers. The IFJ campaign also called on the governments of Cambodia, Nepal and Thailand to respond to the UNESCO Director-General’s report The Safety of Journalists and the Danger of Impunity, which they have so far failed to do.

Across the South Asia region affiliates launched their own campaigns and activities to demand action to end impunity. In Pakistan, the PFUJ wrote a letter to Prime Minister Nawaz Sharif and the PFUJ and affiliated units also carried out different activities to mark the UN International Day to End Impunity, including discussion sessions in Lahore, a candlelight vigil to honour departed colleagues in Karachi, and similar functions in Peshawar, Quetta, Rawalpindi, Islamabad, Multan, Faisalabad, Gujranwala, Hyderabad, Bahawalpur and Abbottabad. In Nepal, the Federation of Nepali Journalists launched Without A Trace with an event attended by the Minister of Home Affairs and local media. In Sri Lanka the Sri Lanka Working Journalists Association held a candlelight vigil on November 23 to call for an end to impunity. On December 7, the National Union of Journalists (India) concluded a month long end impunity campaign with a protest at parliament in New Delhi. Read more here and here.

2. IFJ Asia-Pacific launches Without A Trace

Across the Asia Pacific region, the IFJ has been documenting the cases of 10 journalists missing, with the oldest case dating back to 1975. On November 16, the International Federation of Journalists (IFJ) Asia-Pacific launched Without A Trace: Media workers missing in the Asia-Pacific, an online record highlighting the stories of 10 media workers who remain missing in the region.

Without a Trace was launched in Kathmandu, Nepal in the program hosted by the Federation of Nepali Journalists (FNJ) and attended by the Minister for Home Affairs and local media. Visit Without A Trace here.

The IFJ Asia-Pacific also launched an online petition with the list, calling on governments to sign and ratify the UN Convention for the Protection for All Persons from Enforced Disappearances. You can sign the petition here.

3. Orange the World campaign calls for end to violence against women and girls

On International Day to End Violence Against Women and Girls (November 25), the IFJ joined the global campaign #orangetheworld on the issue of violence against women working in the media. Specifically, this year the IFJ is calling on journalists and their unions to raise awareness and take action against gender violence, highlighting the damaging and rapidly increasing incidents of cyber-bullying and threats online.

The IFJ Asia Pacific noted that the challenges for female media workers across the Asia Pacific far exceed those experienced by their male counterparts. The 2015 IFJ Asia Pacific gender in the media research in, Inside the News, found that 1 in 5 female media workers have experienced sexual harassment in the workplace. As journalism expands further into the digital realm, so does the scope for threats, and so November 25 was used to call for action across the region from governments, media organizations and unions.

On November 22, Pakistan journalist Hafeez-ur-Rehman was shot near his home by two unidentified assailants on a motorcycle. Rehman was shot three times and died instantly. Rehman had been working as a journalist for over 12 years, and was employed with Neo TV. He had also been publishing his own daily, Asia, until earlier this year.

Rehman is the second Pakistani journalist to be killed this month, following the murder of Zaman Mehsud in Tank in KP/FATA on November 3. The Taliban claimed responsibility for Mehsud’s murder. Read more here.

5. IFJ condemns the killing of a TV manager in Afghanistan

Amanullah Ataee, the managing director of private channel Asia Television in the Karta-e-Now region of Kabul was murdered on November 29. According to police, Ataee was shot dead in front of his house in the evening of Sunday, November 29. The Kabul Police detained two of his relatives on charges of murder on the basis of initial investigations.

Amanullah is the third media personnel to be killed in Afghanistan in 2015. Read more here.

On November 24, journalists covering a dharma (a non-violent, sit-in protest) between the Union Minister for Human Resource Development, Shri Ramshankar Katheria, BJP MLA and local traders in Agra, Uttar Pradesh were subjected to police attack. During the protest, police tried to disburse the group and ‘baton charged’ at the journalists.

During the incident, over 10 journalists were injured, including some seriously, after police beat them during the charge. Since June this year, three journalists have been killed in Uttar Pradesh, making up three of the six journalists killed in India this year. Read more here (For Hindi click here).

Responding to the notification, the editors stated that ‘the role of the media in an environment of conflict is a critical component in the search for peace and justice’. They also said that they were guided by a free, fair, forthright, sensitive and unbiased approach in the reports while fulfilling their roles against the backdrop of Naga history and reality. Read more here.

Under the UNDEF South Asia Media for Democracy project, the IFJ affiliates and SAMSN members conducted digital campaigns on media issues. In Sri Lanka, the Free Media Movement (FMM) launched a campaign Free Expression for All which aims to raise awareness about impunity in Sri Lanka, put pressure on the government to introduce to the RTI Bill and address issues of sexual harassment in the workplace.  Visit FMM Facebook page for more.

In India, the National Union of Journalists (India) conducted a month-long campaign demanding the enactment of the Journalist Protection Act. The campaign aimed to create awareness and put pressure on the government to provide statutory protection for physical and professional safety of journalists. The campaign included a massive protest on December 7 in front of the parliament. NUJI used the hashtag #MakeJournalistProtectionAct for the campaign. For more details go to the NUJ(I) website: http://www.nujindia.com/

In Nepal, the Nepal Press Union launched a campaign on Raising awareness for professional and physical safety of journalists. The campaigns aimed to develop an online safety resource and create awareness of safety issues and concerns. The campaign was launched on December 12 and will run until February 2016. For more information, go to the NPU website:http://www.nepalpressunion.org.np

On November 24 and 25, the IFJ and the Bangladesh Nari Sangbadik Kendra (BNSK), supported the Norwegian Ministry of Foreign Affairs, hosted a two-day gender safety and equity workshop in Bangladesh. The workshop, which was attended by around 20 female journalists from across the country, discussed the challenges for women journalists in Bangladesh and provided practical tools and advice to overcome the challenges. See photos from the workshop here.

On November 25 and 25, the IFJ and SAMSN-member, the Bangladesh Manobadhikar Sangbadik Forum (BMSF), supported by Union to Union, hosted a two-day Digital Campaign Skills workshop. More than 25 journalists from attended the workshop across the country, with over 50% female participants. The workshop provided the participants with practical skills undertake a digital campaign. The workshop faced some challenges, with key social media channels including Facebook been blocked by the government in the days before. See photos from the workshop here.

Similarly, on December 3 and 4, the IFJ and the Afghanistan Independent Journalists Association (AIJA), supported by the UNDEF, hosted a two-day Digital Campaign Skills workshop in Kabul. More than 22 journalists from various provinces of Afghanistan attended the workshop with 35% female participants. The workshop provided the participants with practical skills undertake a digital campaign on media issues.

To mark the International Day to End Violence Against Women and Girls, we spoke to female journalists Divya Rajagoal, Neha Dixit and Priyanka Borpujari of India, and asked them to tell us about their experiences and what types of strategies they were using to combat the violence. Read more.

Fighting against the abductions and disappearances [of journalists] needs unity and consistency among the media community. Swift action, including mobilisation, advocacy and alerts at home and abroad could provide relief in the short term and long term. Training and support too will be necessary. In Sinhala we have a saying: ‘tattu karananta dora hare’; the door only opens to the one who knocks. The lesson is to fight and not give up! Read more.

Two journalists, Somaru Nag and Santosh Yadav, were arrested in July and September 2015, respectively, on the charge of supporting Maoists in Chhattisgarh in central India. According to reports, each of the journalists have faced custodial torture. In a petition lodged by local media to Mr Ajun Jaitley, the Union Minister for Information & Broadcasting, the petition is signed by over 100 local journalists and media workers, calling for the immediate release of the journalists and the Chhattisgarh state create a safe working environment for journalists. For more information, click here.

An industry that was traditionally run by men is witnessing a gender shift: more women have entered the Pakistani news media industry in the past decade than ever before. The face of Pakistani media is changing, and women are the catalysts of this transformation. Read more here.

In January 2015 the Government of Pakistan drafted the Prevention of Electronic Crimes Bill (PECB). Ostensibly the PECB was written to address new digital issues, such as cyberstalking, forgery, and online harassment. The reality is the PECB contains such broad legal provisions that that it would criminalize everyday acts of expression while undermining the right to privacy of Pakistani citizens. Read more here and you can also take action tweeting to Pakistani politicians against it here.

Freedom on the Net 2015 finds internet freedom around the world in decline for a fifth consecutive year as more governments censored information of public interest while also expanding surveillance and cracking down on privacy tools. South Asian countries covered in the report include Pakistan (not free), India, Bangladesh and Sri Lanka (partly free). Access the report here.