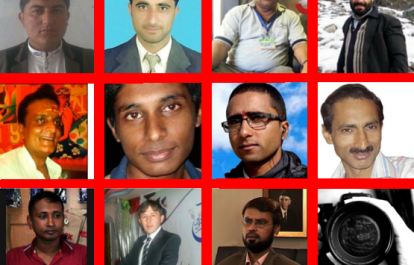 Welcome to the monthly e-bulletin of the South Asia Media Solidarity Network (SAMSN). The next bulletin will be sent on December 15, 2015, and your inputs are most welcome.

1. Without a Trace launching November 16

Every time a journalist is abducted or disappears without a trace, the impact on press freedom can be devastating. There is no doubt that the insecurity and fear created by a disappearance ripples through the entire media community, which sadly too often is the strategy of those responsible. Compounded with the failure of states to adequately find and prosecute those responsible, it also creates a climate of impunity for such atrocities.

For more information visit the IFJ #EndImpunity page on the IFJ website here and following #IFJMissing on social media.

The IFJ Asia-Pacific, in coordination with its affiliates launches the three-week End Impunity Campaign for attacks against media workers. In the Asia-Pacific in 2014, 39 journalists lost their lives in the line of duty – accounting for nearly a third of all journalists killed around the world.

The 2015 Asia-Pacific campaign focuses on India, Pakistan and the Philippines, where government authorities have consistently failed to display a genuine commitment towards ending impunity and bringing perpetrators and masterminds to justice. The first week saw the launch of a letter campaign to call to the governments of India, Pakistan and the Philippines to account and to demand action be taken to end impunity.

The IFJ campaign will also call on the governments of Cambodia, Nepal and Thailand to respond to the UNESCO Director-General’s report The Safety of Journalists and the Danger of Impunity, which they have so far failed to do. More here.

The 2015 global campaign will put a specific emphasis on four countries: Mexico, the Philippines, Ukraine and Yemen. More here.

Both IFJ’s global campaign and IFJ Asia-Pacific’s regional campaign began on November 2, the UN International Day to End Impunity for Crimes Against Journalists, and will run until November 23, the 6th anniversary of the Ampatuan Massacre in the Philippines. The UN Day to End Impunity was adopted on 18 December 2013 to be marked every 2 November, the anniversary of the killings of two RFI reporters, Ghislaine Dupont and Claude Verlon, murdered in Kidal, Mali in 2013. It comes ahead of November 23, which commemorates the 2009 Ampatuan massacre in Maguindanao in the southern Philippines when at least 32 journalists lost their lives in the single deadliest attack on media.

3. Senior journalist gunned down in Pakistan

On November 3, senior tribal journalist Dr Zaman Mehsud was gunned down in the Tank district of Khyber Pahktunkhwa province in Pakistan. Dr Mehsud was travelling from his home town of Gomel, and heading towards Tank City in north-western Pakistan, when he was attacked by unidentified gunmen. He was shot five times and rushed to the District Headquarters Hospital, but he died from his injuries shortly after arriving.

Mehsud was a well-respected veteran journalist who had served as the President and Secretary-General of the Tribal Union of Journalists’ South Waziristan chapter. He was working with Daily Umat (Karachi) and also running his own Twitter news, “Gomel News”.

Mehsud was the 24th journalist to be killed in the Asia Pacific region this year. More here.

Afzal Mughal, who works for Urdu-language newspaper The Daily Mashriq and also for Online International News Agency, was abducted from his home by at least eight masked assailants on early hours of Tuesday, November 10.

According to reports, Mughal was tortured and then thrown into a vehicle and driven to an unknown location. For fifteen hours, his captors questioned him about his family, professional life, and especially about phone calls he had received from banned militant groups regarding news. Following his 15 hours captive, Mughal was dropped outside his house.  Mughal later said that the security agency took him for some questioning. More here.

The Ansarullah Bangla Team (ABT), a banned Islamist extremist group, issued threats against female journalists in Bangladesh on October 19. The ABT sent a letter to local media saying that all media outlets should “release their women from their jobs”, claiming it is against Islamic law for women to work in the media. The letter also reiterated the threats made in a hit list issued by ABT last month, naming 15 bloggers and accusing them of participating in anti-Islam campaigns.

Among the 15 bloggers named were Niloy Neel, Washiqur Babu and Avijit Roy, who were killed earlier this year. The letter threatened that those who follow these bloggers would meet a similar fate.  The ABT is thought to have links to al Qaeda in the Indian subcontinent. Since February this year, five secular bloggers have been brutally murdered in Bangladesh. In each instance those responsible have blamed the writings of their victims, calling them anti-Islamist. More here.

6. Secular publisher hacked to death in Bangladesh by religious group

Faisal Arefin Dipan, who ran the publishing company Jadriti Prokashony, was brutally hacked to death in his office in Shahbagh in Dhaka on October 31. Dipan was declared dead upon arrival to Dhaka Medical College Hospital, after being discovered by his father, who went to his son’s office after hearing of another attack in the city. Dipan, 43, was the publisher of secular blogger Avijit Roy, who was hacked to death in Dhaka in February.

According to police, the attackers locked Dipan’s office, locking several other people inside before carrying out the attack. The attackers identified themselves as customers to get access to the office building. The murder came just hours after an attack on another publisher of Roy, Ahmed Rahim Tutul, as well as secular bloggers Ranadeep Basu and Tariq Rahim, who were all shot at and stabbed at the Shudhdoswar officers in Dhaka. More here.

On October 24, Mithilesh Pandey, a 40-year-old reporter with online Hindi newspaper Dainik Jagran, was killed in his home in Bihar, northern India. According to police reports, Pandey was killed when three masked intruders stormed his house and opened fire as he slept. Pandey’s family said that prior to his murder he had been receiving death threats and had informed police of this. More here.

8. Fears for media freedom after State of Emergency declared in the Maldives

Press freedom in the Maldives has suffered following the declaration of 30-day state of emergency on November 4.

On November 6, the Maldivian police raided Sangu TV, a private television station, in connection with a YouTube video allegedly threatening President Abdulla Yameen. They removed every computer hard disc and the company’s archive system, which ultimately forced the station to stop its broadcasting. The YouTube video showed three masked men issuing a death threat against the President; police suspected the video was uploaded from the TV station, a claim denied by Sangu TV.

In a separate incident on November 6, pro-opposition station Raajje TV suspended coverage of political affairs stating that ‘the threat to freedom of expression and freedom of the media has been immense’ after the declaration of emergency. A journalist for Raajje TV was also briefly detained on November 6, with videos and photos of the arrest going viral on the Internet; however the police denied his detention. They resumed news broadcasting on November 8.

After the declaration of the state of emergency, the Maldives Broadcast Commission (MBC), a regulatory body instituted to defend and protect the rights of the broadcasters, said it would revoke the licenses of any radio or TV outlet that airs content which poses a threat to national security. More here.

9. Journalists threatened and news website hacked in the Maldives

Addu Live, a Maldivian news website operating out of Addu City, was hacked and threats were made against its journalists in late October. On October 15, Addu Live was hacked, and its offices received threatening phone calls. The threatening calls, which Addu Live allege came from acquitted suspects from the criminal courts, demanded that the outlet take down reports on corruption of judges and articles critical of the government. The website was down for over a week. Journalists from Addu Live have also been receiving threats for over two months. More here.

For the journalists in Kashmir who work for various national and international media organizations, updating their respective editing desks based outside the state became difficult without Internet access, and they resorted to conveying news feeds via telephone. Some online news portals, which had come up in Kashmir in last few years, have shutdown in the wake of regular Internet and communication bans. As a result, there are still no viable digital news platforms in Kashmir. In addition, the print and electronic media are hugely affected by the usual internet shutdowns, creating a not so work friendly atmosphere for journalists in Kashmir valley. More here.

Killing a journalist is a cowardly act, and many of the journalists who are murdered lose their life simply because of their job: that of exposing the truth to inform the public. Murders of journalists have a multilayered impact on society, as their chilling effect is felt both by living journalists, who, in the absence of justice, are forced to restrict themselves either by self-censorship or by safety measures; and by society as a whole, for it is faced with the risk of not hearing the truths that must be known. To safeguard democratic values on which societies are founded, it is essential that governments act to protect freedom of expression and prosecute all those responsible for its violation. Unless the nations in the South Asia take serious and bold steps in ending impunity for crimes against journalists, they will remain untrue to the spirit of democracy. More here.

11. Caught Between Five Extremes: Reporting Pakistan (RISJ)
The Reuters Insitute for the Study of Journalism (RISJ) has published a report titled ‘Caught Between Five Extremes: Reporting Pakistan’. Written by Razeshta Sethna, a journalist at the Dawn Media Group in Pakistan, the publication gives a comprehensive picture of the state of the media in Pakistan. Based on interviews with more than 30 key figures in her country’s media, Razeshta concludes that journalists are caught between five forces – the state, its security apparatus, political parties, militant organizations and religious-right Islamist groups. Find it here.

12. Debating Faith in Cyberspace: Offline Consequences of Online religious expression in Pakistan (Bytes For All)

A deep-rooted culture of impunity, life threatening environment for online religious expression, and conflicting constitutional provisions and governance practices are the key findings of a new research report launched by Bytes for All (B4A), Pakistan.