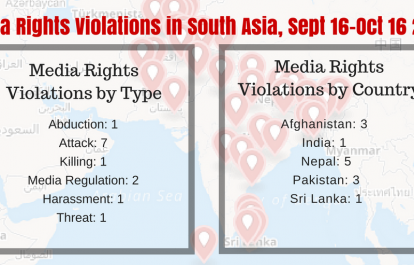 Welcome to the monthly e-bulletin of the South Asia Media Solidarity Network (SAMSN). The next bulletin will be sent on November 15, 2016, and your inputs are most welcome.

Yaqub Sharafat, senior provincial reporter for the state-run Radio Television Afghanistan (RTA) was shot dead by unknown armed men in Rasala area of the provincial capital Qalat. He sustained serious gunshot injuries and died on the way to the hospital. The police has begun its investigation but is yet to arrest anyone. No group has claimed responsibility for the killing. Sharafat is the eleventh journalist and media worker to be killed in Afghanistan in 2016. More here.

The IFJ has welcomed a call by the United Nations to tackle impunity for crimes against media workers, as part of a wide-ranging motion promoting the safety of journalists, adopted by the Human Rights Council (HCR) in Geneva on September 29. The five-page motion “condemns all attacks and violence against journalists” and recognises media freedom as a cornerstone of democratic societies. It also expresses deep concern over all human rights violations against journalists which undermine freedom of expression and lead to self-censorship or deter journalists from continuing their work. More here.

This year, the IFJ observed the World Day for Decent Work on October 7 by highlighting the advantages of collective bargaining with the key message ‘whether in new or traditional, mainstream or alternative, public service or privately-owned media, whether employed or freelance, whether younger or older, male or female, union action, collective bargaining and standing together make a difference.’ The IFJ campaign page is here and the SAMSN Digital Hub campaign page is here.

4. IFJ and SAMSN demand lifting of ban on Kashmir Reader

The IFJ and the SAMSN on October 7 called upon the authorities in the state of Jammu and Kashmir to lift the ban on the Kashmir Reader. The SAMSN said that in an already polarised situation the ban on the Reader is arbitrary and goes against the democratic spirit of allowing a diversity of voices to flourish in the public domain. The ban order was issued by the district magistrate, Srinagar, invoking Section 3 of News Papers Incitement of Offences Act, 1971 and Section 10 of Press and Publication Act, 1989, on grounds that the publication of the daily can “easily incite acts of violence and disturb peace and tranquillity”.  More here.

Abdul Saboor Sarir, editor-in-chief of the Afghan Times, was attacked by three men at gun point as he returned home in the Khwaja Bughra area of Kabul city on October 9. The assailants stopped Sarir, attacked him, took his vehicle, laptop and cell phones. The attack took place as Sarir returned from the Kabul-based English newspaper office, 3.5 kms from the Ministry of Interior. During the attack, Sarir sustained head injuries, but returned to a stable condition. More here.

Mohamad Reza Wahidi, owner of Nasim Radio was assaulted by the two men who knocked on his door on October 12 in Nili, the provincial capital of Dykundi province in central Afghanistan. He collapsed after he was hit on his head and threatened at gunpoint and told to refrain from broadcasting the news. He was also warned that his family and son would be harmed if he continued his reporting. On the same night the offices of Nasim Radio were damaged in a bomb attack. More here.

The IFJ welcomes the recent resolution by journalists of Afghanistan and Pakistan to promote a healthy relationship through positive and constructive reporting. Senior journalists from the neighbouring countries passed the resolution at a seminar organised by the Pakistan Federal Union of Journalists (PFUJ) in Dubai, United Arab Emirates, in collaboration with the non-profit organisation Equal Access.  The participants discussed the working conditions of journalists in both countries and agreed that the media could play a vital role in strengthening the fraught bilateral relationship between Pakistan and Afghanistan. More here.

On October 11, Cyril Almeida, journalist for the English-language daily Dawn, was informed that he had been placed on Pakistan’s Exit Control List (ECL), which bars select individuals from leaving the country. Almeida was booked on a flight to Dubai for a family holiday, but was told he should not go to the airport as he would not be allowed to board the plane. The ban was in response to a story penned by Almeida and published on the front page of Dawn on October 6 about differences in security agency and government. More here. The ban was lifted on October 14, after outcry and pressure from journalist rights organisations.

9. Media executive held captive for a day in Pakistan

Abid Abdullah, the executive director of the Jang Group media house, was abducted at gunpoint on September28 in Peshawar, the capital of the Khyber Pakhtunkhwa province in northwestern Pakistan. Abdullah was kidnapped by at least eight armed men while returning to his hotel after finishing work at the Jang Group Printing Press in Hayatabad Industrial Estate. The abductors intercepted his car and took him and his driver hostage at gunpoint as three gunmen occupied their car. He was detained for a day and later released. More here.

Fiza Khan, a news presenter for the Urdu-language Capital TV channel based in Pakistan’s capital, Islamabad, was allegedly forced to resign after being harassed by senior staff at the station. Khan approached the Pakistan Federal Union of Journalists (PFUJ) to file a complaint and said that working conditions at the TV station were intolerable. More here.

Ranjith Karunaweera, a journalist with Hiru TV was threatened over a news story by a group of people on September 27. Local sand miners had filed a complaint at the police station after Karunaweera’s news report on illegal sand mining in the Mahaweli river bed and how it threatened the environment and stability of Weraganthota bridge.  The Hasalaka police summoned Karunaweera for a statement and upon his arrival, a group of nearly two dozen sand miners used abusive language and threatened to kill him. Other journalists who accompanied him led him to safety. More here.

The body of Sunday Leader editor Wickrematunge was exhumed for a post-mortem as two earlier post-mortem reports were conflicting, with one concluding he had died from gunshot injuries, while another said there was no evidence of bullet wounds. On September 27, the police exhumed his body, and did not allow journalists or human rights activists to witness the exhumation. On January 8, 2009, Wickrematunge, one of the most influential journalists at the time and a vocal critic of the authoritarian regime of President Mahinda Rajapaksa, was killed on his way to work in broad daylight by motorcycle-borne assassins. More here.

The Federation of Nepali Journalists (FNJ) media monitoring unit documented five incidents of media rights violations in the last two weeks of September. The incidents include attacks on journalists and media houses across Nepal. More here.

Almost a year ago, on November 2 2015, the IFJ launched its annual #EndImpunity campaign calling for action to end impunity for crimes against journalists. This year too, the IFJ is calling upon affiliates across the region to take a stand to demand action from local governments and media organisations. Please send information about campaigns to end impunity to Ujjwal Acharya at: ifjsouthasia@gmail.com

The Right to Information in most countries of South Asia has been won after protracted struggles by the media and civil society activists. To mark September 28, the International ‘Right to Know’ Day, Laxmi Murthy traces this history and outlines the challenges. Read more.

Lotfullah Najafizada, the 28-year-old head of TOLO news, Afghanistan’s largest 24-hour news station, was named among the Next Generation Leaders 2016 by the TIME magazine. Read more.

The Press Council of Nepal on September 22 issued a new journalists’ code of conduct formulated in collaboration with Federation of Nepali Journalists (FNJ) on the occasion of the Council’s 47th anniversary. Read more and download the Nepali version of the Code of Conduct here.

Kunda Dixit cut his once mop-like white hair, grew a beard, and quietly went into hiding, eventually fleeing Nepal to avoid arrest. And in doing so, the prominent journalist, publisher and editor of the Nepali Times, missed a major international journalism conference he was co-sponsoring with the Global Investigative Journalism Network. In a videotaped speech played at the conference, attended by over 350 journalists, mainly from Asia, he blamed a “political witch hunt” for his self-imposed exile. Read more.

One of South Asia’s most influential news magazines, Himal Southasian, is set to close next month after 29 years of publishing as part of a clampdown on freedom of expression across the region. In an interview, Himal Southasian’s editor, Aunohita Mojumdar, talked about the vital role of independent media in South Asia, the Nepali government’s convoluted way of silencing activists and what the future holds for journalism in the region. Read more.

A BBC Media Action policy brief explores some of the key challenges facing the Nepali media. It outlines growing concerns over politicisation and co-option, particularly of the mainstream Kathmandu-based media, as well as other economic and technological challenges facing the media. The brief further outlines how Nepal’s historically diverse and decentralised media market is increasingly showing signs of fragmentation and discord. It also examines the role that the international development community has played in supporting the Nepali media. Download here.

20. Do Women Journalists Have it Harder in India? (The Ladies Finger)

You might have heard that the media business is booming while journalists are under siege in India. Indian women journalists face all the usual threats that come with rigorous reporting—from physical attacks to intimidation—but they also face a continuous stream of misogyny and harassment that we need to pay attention to if we are to save our media. Read more.

SAMSN is a group of journalists’ trade unions, press freedom organisations and journalists in South Asia that work together to support freedom of expression and association in the region.