Sri Lanka: On the front line of media rights 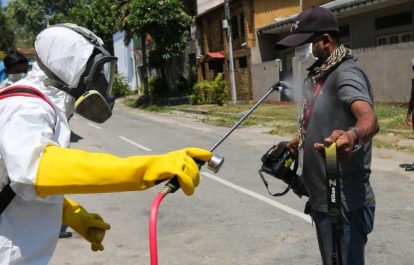 In 2015, the new government led by the President Sirisena and Prime Minister Wickramasinghe came to power with a bag full of promises including ending the impunity of crimes against journalists. In its first two years, the new regime showed considerable commitment to ending impunity and establishing a healthy environment for media freedom. But all this has changed since 2017. A different and dangerous face of media rights violations have occurred including executive decisions against media freedom, the shutdown of the internet and blocking social media platforms.

November 2019 saw another regime change, as two brothers, Gotabaya Rajapaksha and Mahinda Rajapaksha as the President and Prime Minister respectively, seized power. The change raised serious concerns regarding media freedom because Mahinda and Gotabaya were the President and Secretary of the Defense Ministry from 2005-2010 when a raft of serious media rights violations occurred and until today justice have not been done yet.

According to the monitors, several media rights violations have occurred since November 2019. Three journalists, two of them in Colombo and the other in northern city Vavniya, were called and questioned by the police in the November. A provincial journalists and his wife were assaulted at Aluthgama in Kaluthara district and seven journalists, who belongs ethnic minority, from Batticaloa received death threats. There were numerous other threats against journalists and media outlets.

This is what was reported. But the reality is that many violations go unreported or unnoticed.

As opined by group of journalists, editorial independence has become a nightmare for many Sri Lankan media stations. Reporters have been forced to neglect diverse voices, the right of reply has been ignored and questions of ethical reporting have gone unheeded. Journalists have been put in a difficult situation – their journalism ethics are undermined yet they want to hold on to their jobs. Conversely, there are journalists who adopt these negative practices, due to a combination of poor training and a desire to protect their own jobs. Indeed, journalists who have raised their voices against such practices have been fired.

Activist groups and social media users have found legitimate reason to criticize private broadcast media outlets for divisive and insensitive reporting especially on ethnic, racial and religious issues. There are media outlets that all too often fail to take into account these sensitivities. As a consequence the media, in general, faces a backlash from ethnic and religious minorities creating an unhealthy reporting environment. .

With the spread of the corona pandemic, problems for journalists in Sri Lanka have been compounded. Salary cuts are widespread and some journalists have not been paid salaries for months. The situation is worse for contract and freelance media workers.

On April 1 this year, the Sri Lankan police issued a public statement on threatening, stern legal action against anyone making defamatory or malicious social posts about public servants in relation to the Covid-19 outbreaks. As per the release, the Acting Inspector General of the Police ordered the Criminal Investigation Department (CID) and officers in charge of all police stations across the country to arrest those who violate these warnings.  Even people who highlighted these threats on their social media accounts were arrested, tried and remanded.

While certain restrictions on freedom of expression during a pandemic may be acceptable, Covid-19 should not be used as an excuse to repress dissent.  Media rights violations in Sri Lanka are varied and disturbing. From severe violations including threats, arrests, jailing and being fired from their work for holding power to account. And then there are the ‘soft’ violations related to issues of editorial independence and self-censorship. While these violations cannot be observed easily, the impacts are serious.

The question for Sri Lankan journalists and media organisations is: have they identified the issues that infringe on media freedom?  And are they prepared to deal with new changes and challenges?

There are three main media organisations in Sri Lanka that work with International Federation of Journalists (IFJ) as affiliates.  These representative bodies play a key role as media monitors. Together with media organisations representing specific ethnic groups or media specialisations, organizing to protect rights is more effective. Collective action is central to protecting rights with a slew of emerging challenges.

For collective action to succeed, an umbrella organisation with specific aims and common objectives is vital to establishing a sustainable and collaborative mission to protect media freedom.

Divisions among media rights organisations cause confusion for journalists. For instance, journalists have had to deal with three or more media organisations when they face media rights violations, complicating their own need for support.  Establishing a central body with the participation of all groups to monitor media rights violation is an important step to addressing the emerging challenges.  A common platform for identifying and working with all subjective and objective issues would be beneficial to all journalists in the country.

The majority of journalists in Sri Lanka are not members nor do they have any close connections with any media representative organisations. Without the support of representative journalist bodies, isolated journalists are bound to feel more vulnerable,  as it is easier for their press freedoms to be violated.  Some provincial journalists do have the support of regional media support networks. However, by working closely with national media monitors serious violations can be dealt with more effectively.

It is imperative that both media organisations and journalists update their knowledge and responses to media rights violations. The focus has been largely on serious violations such as attacks, threats and intimidations. Often what are considered ‘soft’ violations including self-censorship, editorial independence, professional rights, gender based violations and discrimination on the basis of ethnicity or religion are overlooked.

As different governments come to power, the challenges faced by media organisations and journalists evolve and intensify.  Media workers need to coordinate to deal with the emerging challenges and they have to fight continuously against ongoing issues, especially impunity for crimes against journalists. Media organisations and journalists of Sri Lanka must rethink their institutional activities and organisational structure in order to address emerging challenges to media freedom and work collectively to fight for real change.

Viranjana Herath is a lawyer, journalist and researcher currently reading his PhD in Legal Studies at South Asian University, New Delhi with Masters in Human Rights Law from National law school of India University Bangalore and Masters in Mass Communication from the University of Kelaniya, Sri Lanka.