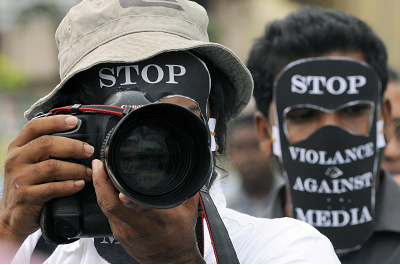 The International Federation Journalists (IFJ) has endorsed the declaration handed down by a visiting international media solidarity delegation to Sri Lanka this week calling on the Sri Lankan government to ensure that critical media reform measures are made permanent and media freedom to be an absolute priority of the new administration.

During the five-day visit, the delegation travelled to Sri Lanka’s north to meet with journalists from Jaffna as well as provincial and regional journalists. It then visited the country capital, Colombo, for meetings with government ministers, metropolitan journalists and unions and conducted a national press conference and civil society forum on media freedom.

In its meetings with the government, the delegation was assured that the long-awaited Freedom of Information (FoI) bill would be tabled this month and passed before the upcoming parliamentary elections. The second assurance given to the delegation was a commitment to tackle impunity for crimes against journalists – a long-running and festering blight on Sri Lanka’s reputation globally.

Government representatives said that they had already requested the Inspector General of Police, N.K. Illangakoon to carry out thorough investigations into journalist killings, with priority given to the 2009 murder of Lasantha Wickramatunge and the 2010 disappearance of Prageeth Eknaligoda.

The IFJ and the delegation note that while there is a sense of optimism among Sri Lanka journalists about the future of their profession in the wake of the country’s recent presidential election, they urged the government to build on the reforms in the second half of the 100 day platform.

During meetings with local journalists, the delegation noted the near universal agreement that the situation in Sri Lanka had improved, in some cases dramatically, since the January election. However, in the country’s north and in the northern city of Jaffna there remains a level of uncertainty about whether the atmosphere will last. The delegation raised these issues with the government, stressing the importance of ensuring any improvements to media freedom are long-lasting.

The International Media Solidarity Delegation said: “We welcome the government’s stated commitment to ending the cycle of impunity and violence that has plagued Sri Lanka media over the past 25 years. We also welcome assurances from the government that the editorial independence of both print and broadcast state media will be respected. However, we reiterate our view that the only way to guarantee the independence of the state media in the future is through structural change that transforms state outlets into public service media dedicated to providing fair and balanced information to the Sri Lankan people.”

It went on to say in its declaration: “We believe that this is a critical moment for journalism in Sri Lanka, and the government has a tremendous opportunity to strengthen press freedom in Sri Lanka for the future and independent of political changes.”

The IFJ Asia Pacific deputy director Jane Worthington said: “Sri Lanka has an opportunity to transform the media landscape and the IFJ welcomes the government’s early signs and verbal commitments to this end.”

She acknowledged that journalists in Sri Lanka had noted a strong shift in media freedom which is a heartening and hopeful sign not only for the media but for wider society to build its trust in a full and functioning independent media.

“Right now, change is needed but any actions must be meaningful and go below the surface to shore up the foundation of all media outlets and ultimately press freedom in Sri Lanka,” she said.

Read the statements from the delegation here and here.