Sri Lanka: Opportunities to challenge impunity for crimes against journalists in Sri Lanka 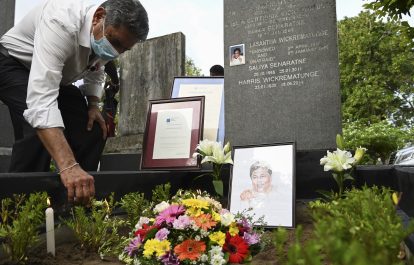 Sri Lanka has an unfortunate history of impunity for crimes against journalists and media workers. The actions of the Rajapaksa family and government crackdown during Sri Lanka’s ongoing social unrest require action. Media and press freedom organisations in Sri Lanka should take advantage of international action and social momentum to challenge impunity, writes Ruki Fernando.

Opportunities to challenge impunity for crimes against journalists in Sri Lanka

Many journalists have been killed and subjected to enforced disappearances in Sri Lanka, with the Jayewardene-Premadasa-led UNP governments of 1977-1994 and the Rajapaksa-led UPFA government of 2006-2014 committing grave media rights violations across their regimes. Across several governments, journalists and media workers have faced arrest, detainment assault, threats, intimidation and harassment. Media outlets have been subjected to arson and legal crackdowns, with the English-language weekend paper Sunday Leader and Tamil-language newspaper Uthayan being among the worst affected. Impunity has reigned for all these.

Crimes against journalists continue to the present. in October 2020, Shanmugam Thavaseelan and Kanapathipillai Kumanan were assaulted when they were covering illegal deforestation in the highly militarized Mullaitheevu district. Though some arrests were made, suspects were quickly released on bail and two years later, no one has been held accountable.

In July 2021, Senior Deputy Inspector General of Police, Deshabandu Tennakoon, threatened prominent investigative journalist Tharindu Jayawardena through Facebook comments (including implied death threats) after a report about him was published. Despite a formal complaint to the Inspector General of Police, there have been no proper investigations and Tennakoon has not been held accountable to date.

This year, journalists covering protests have also faced reprisals. An investigation was ordered into MTV networks, a popular private television channel. The investigation aimed to blame the channel’s live broadcast of a major protest outside the then-president’s house for the violence that occurred. A group of journalists from the same private channel were beaten by Special Task Force (STF) police officers on July 9 2022, while covering a major protest outside the Prime Minister’s residence.

One of those beaten up and injured was Waruna Sampath, who was also one of the two journalists beaten up and injured in August 2008, by then Minister Mervyn Silva and a group of goons. Waruna had courageously filed Fundamental Rights petitions concerning both incidents. While the Supreme Court awarded him compensation for the 2008 incident, his Fundamental Rights petition for the 2022 incident has been postponed until next year. No one has been held legally accountable for either the 2008 or 2022 incidents, despite both incidents happening in front of police, media cameras, and thousands of people.

Many journalists fear challenging impunity, and have subjected themselves to self-censorship or fled into exile. More are likely to follow.

This year, an unprecedented economic crisis led to a historic series of protests that toppled the racist, corrupt and authoritarian Rajapaksa ruling family who were known to crack down on dissent. The Sri Lanka Working Journalists Association (SLWJA) placed huge billboards of murdered, tortured and disappeared journalists on the fence of the Presidential Secretariat, the most prominent protest site in the country. The billboards were removed and destroyed but were quickly re-installed. During the protests, ordinary citizens also demonstrated by holding smaller placards in remembrance of murdered and disappeared journalists and demanding justice.

The protests coincided with significant international developments to address impunity in Sri Lanka. In 2021, the Permanent People’s Tribunal in The Hague held hearings into the murder of The Sunday Leader journalist and editor Lasantha Wickrematunge. The hearing was based on an indictment presented by a coalition of international press freedom organizations and analysed the greater context of impunity for crimes against journalists and found Lasantha’s murder was one incident in systemic attacks on journalists and media workers during the civil war.

Forty-four names of journalists and media workers killed or disappeared between 2004 to 2010, the majority of whom are Tamils, were read out by Journalists for Democracy in Sri Lanka while acknowledging there had been many more killed and disappeared before that. The tribunal judgement noted that the Sri Lankan government, through their lack of investigations, lack of reparations to victims, and impunity for crimes against journalists, was guilty of grave violations of the human rights of Lasantha Wickrematunge, specifically the right to life, the right to freedom of expression, the right to an effective remedy and the right to freedom from discrimination based on political opinion, covering articles 6, 19, 2 and 26 of the International Covenant on Civil and Political Rights.

The Hague Tribunal hearings follow other international initiatives to seek justice for Lasantha’s murder. In 2019, the Center for Justice and Accountability filed a civil suit in the United States against former Secretary of Defence Gotabaya Rajapaksa and former president Mahinda Rajapaksa for their alleged involvement in his killing. In 2021, Lasantha’s daughter Ahimsa Wickrematunge filed a complaint to the United Nations Human Rights Commission (UNHCR).

There is also a pending complaint at the United Nations Working Group on Enforced and Involuntary Disappearances (UNWGEID) on disappeared journalist and cartoonist Prageeth Ekneligoda. In November 2021, The UNWGEID wrote to the Sri Lankan government about reprisals faced by his wife Sandya Ekneligoda in her efforts to challenge impunity. Last month, she spoke at the United Nations Committee against Enforced Disappearances.

Impunity for serious crimes against journalists has featured prominently in UNHCR Commissioner reports to the Human Rights Council. Last month, the UNHCR voted on a resolution on Sri Lanka that decided to continue the evidence-gathering process related to crimes in Sri Lanka and support prosecutions. This could include serious crimes against journalists.

These international initiatives have become significant as entrenched impunity has served as a license for continuing crimes and violence against journalists. Not a single person has been convicted for serious crimes against journalists and only two cases have reached the prosecution stage. In one of them, the murder of journalist Mylvaganam Nimalarajan in Jaffna in October 2000, media reported that the Attorney General had instructed the courts not to continue the case against the suspects last year.

The case of journalist and cartoonist Prageeth Ekneligoda’s disappearance in January 2010 also failed to materialise. After a courageous and determined campaign by his wife Sandya Ekneligoda, several army personnel were arrested, and indictments were filed against the nine accused. Most of the case’s progress was made under the Sirisena government, but the return to power of the Rajapaksa family in November 2019 presented new obstacles with the Rajapaksa government pledging not to prosecute ‘war heroes’, military personnel. A top investigator on the case went into exile and the chief overseeing the investigations was arrested and detained, before being released on bail by a higher court and going into retirement.

Though primarily driven by Sri Lanka’s economic crisis, protesters on the streets of Colombo have been insisting on radical long-term institutional reform. This has provided fresh momentum to push for an independent and effective criminal justice system with independent and professional law enforcement, prosecutors, and judiciary.

For decades, media freedom organizations in Sri Lanka have been campaigning against impunity. Though they often demand criminal accountability through judicial processes and international involvement, their work in the judicial sphere and internationally has been limited. There were no strong interventions concerning the Hague Tribunal or the various UN initiatives to address impunity in Sri Lanka. There has been very little legal assistance offered to the survivors of crimes or the families of victims who can wait for years for justice and compensation.

The judicial system offers opportunities to challenge impunity, such as filing writs, Fundamental Rights cases and intervening in ongoing cases. A writ filed by a former prisoner and rights activist led to a landmark prosecution and conviction of a senior prison official involved in a prison massacre. Systematic trial observations and advocacy in significant court cases would also be important in addressing impunity. None of these options have been explored meaningfully by media freedom organisations in Sri Lanka.

In the last few months, leaders of the Young Journalists Association (YJA) have filed court cases at a Magistrate Court and Fundamental Rights case at the Supreme Court to address impunity relating to freedom of expression and assembly violations by the police. YJA has also challenged impunity for crimes against free expression through their lodging of complaints to the Human Rights Commission of Sri Lanka about demonstrations in Sri Lanka. Their activism, along with some families of victims such as Sandya Ekneligoda and Ahimsa Wickramatunge, have been inspiring in the greater action against impunity.

This year of crisis, uncertainty and hope could also become a turning point to challenge impunity for crimes against journalists. Innovation, creativity, consistency, commitment and courage from local media freedom organizations, especially in the judicial and international spheres could be vital in challenging impunity.

Ruki Fernando is a Sri Lankan journalist and has been involved in human rights activism and social justice advocacy since 1997.