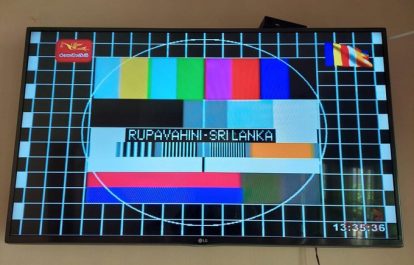 Anti-government protesters entered the building of the Sri Lanka Rupavahini Corporation on July 14, harassing journalists in the office and forcing its broadcast off-air. The International Federation of Journalists (IFJ) and its Sri Lankan affiliates, the Free Media Movement (FMM) and the Federation of Media Employees Trade Unions (FMETU), condemn the attack and call for an end to harassment against media workers in Sri Lanka.

On July 14, a group claiming to represent the ‘Aragalaya’ (the Sinhalese word for struggle) entered the Rupavahini premises and forcibly ordered the television station to limit its broadcast exclusively to the ongoing anti-government protests and entertainment programs.

As a state-run channel, Rupavahini has been accused of broadcasting government propaganda. The FMM has advocated for the station to act as a ‘public service media’, rather than a government mouthpiece.

Amid Sri Lanka’s political and economic crisis, the South Asia Media Solidarity Network (SAMSN) called for the protection of media freedoms and journalists on July 18. Since the mass anti-government protests began on April 9, the government has heavily suppressed the media and several media workers have been harassed, including the physical assault of at least eight journalists on July 9.

FMM said: “Determining the media content is the right of the editorial board of the respective media institutions and intimidating them is a blatant violation of media freedom. Such coercive action from any party will be considered as a direct threat to media freedom and democracy and such actions are strongly condemned. The FMM believes that media reforms should be achieved through a broad dialogue and agreement between the media fraternity, not by coercive actions.”

FMETU said: “The halt on the transmission of the broadcast itself is a serious media rights violation. We urge the media workers and journalists to remain safe during the uprising.”

The IFJ said:“The censoring of media organisations and journalists through intimidation and harassment is a blatant violation of press freedom. The IFJ calls for the safety and security of the press to be protected during the ongoing protests.”