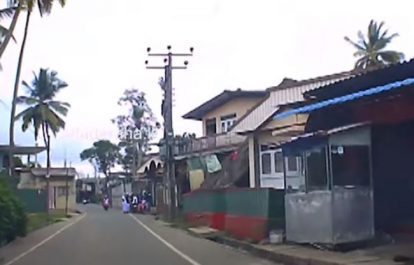 Bimal Shyaman, a journalist with Hiru, Derana and Swarnavahini television channels, was harassed and assaulted while reporting the Eid celebrations in the Atulugama area of Kalutara on May 24, 2020. The International Federation of Journalists (IFJ) and its Sri Lanka affiliate, Free Media Movement (FMM), regret the incident and urge authorities to investigate this assault and harassment case.

The journalist was assaulted when he was finishing up his assignment at a venue in the Atulugama area where Muslims were celebrating the end of the holy month of Ramadan (Eid-ul-Fitr). Bimal had received an invitation from the governing body of a local mosque to report on how a community, that was isolated and quarantined until a few weeks ago, were conducting their religious observances.

After interviewing Najeed Hajjiar Mohamed Najeed, chairperson of the mosque association in Atulugama village, a group of people blocked Bimal, abusing him and vandalising his vehicle. They then threatened Bimal saying that he would face severe consequences if he broadcast the harassment footage. The journalist successfully fled the scene with the help of other locals.

Bimal’s report intended to show how Muslim communities were celebrating Eid and maintaining social distancing amid the Covid-19 outbreak. This was to counter reports by media organisations in Sri Lanka that had blamed Muslims in failing to follow lockdown rules.

Bandaragama police in Panadura arrested six persons in connection with the violent incident. Those arrested have been remanded by the Panadura Magistrate’s Court’s order.

FMM said: “We condemn the intimidation of journalist Bimal Shyaman, urge the parties concerned to provide justice in this regard and urge the media institutions to empower the journalist to carry out his reporting in a broader professional setting.”

IFJ said: “Attacks on journalists while on duty is a blatant violation of freedom of press and expression. IFJ urges Sri Lankan authorities to investigate the case and ensure that the  protection of journalists is a priority.”