Sri Lanka: Situation of freedom of expression and the press in Sri Lanka in 2022 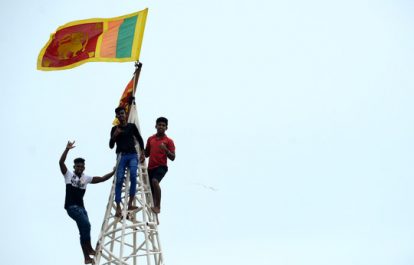 Through economic and political collapse, the fundamental human rights the Sri Lankan government claims to uphold are frequently disrespected or ignored. In achieving legitimate democratic governance in Sri Lanka, the voice of protestors must be heard, writes Gayathri Nawarathne.

Sri Lanka, a country that considers itself to have a democratic socialist government and has promised through a number of local and international laws the implementation of democratic practices through its governance. Its Constitution which is known as the supreme law of the country has emphasized in “Article 03: In the Republic of Sri Lanka, sovereignty is in the People and is inalienable. Sovereignty includes the powers of government, fundamental rights and the franchise.”

“Article 11: No person shall be subjected to torture or to cruel, inhuman or degrading treatment or punishment”

(a) the freedom of speech and expression including publication;

(b) the freedom of peaceful assembly;

(c) the freedom of association; …”

2022 is a year in which the political and socio-economic context of Sri Lanka has gone through a major upheaval. There has been widespread displeasure with the regime’s illegal and corrupt actions, and their peaceful expression started in the first quarter of 2022. There, the public criticized and rejected the positions arbitrarily appointed by the government, and the right of speech and expression of opinion was not directly violated by the government, but the government media outlets published false and hateful statements about the said persons and events.

A veteran and award-winning announcer working for a government-run television service were fired after the network was given a notice by the President’s Secretariat because she had recorded a statement criticizing the government through her personal social media account. As well as clearly violating the aforementioned Articles 11 and 14 of the Constitution of Sri Lanka, dismissal from an organization as a journalist can be pointed out as an instance where the government acted in violation of her professional rights.

With the rise of people’s opposition to the existing regime, the method of suppressing those protests on the part of the government also became severe. There, the government seemed to adopt arbitrary measures to suppress the peaceful protests led by the public.

Assembly and protest, expression of opinion is a constitutional right of the citizen. Therefore, the police, who are bound to act according to the law to protect the fundamental rights of the arrested journalists and other citizens, acted arbitrarily by attacking their responsibilities.

On April 3, 2022, the Telecommunications Regulatory Commission informed service providers to block all social media used in the country at the request of the Ministry of Defense, with the aim of preventing public protests against government corruption. Before that, the President declared a state of emergency and tried to stop the public protests by imposing a curfew across the country.

Sri Lanka was going through a very dark period in its history economically and politically, and due to the government’s failure to find solutions it used existing laws in an anti-democratic manner to suppress the voices of the people.

Social media has now become an integral part of people’s life and has become an essential tool for enjoying the above rights. Recently, it has also been used as a broad platform for professional journalism, and a media community engaged in professional journalism has been formed through Facebook pages and YouTube channels. This arbitrary step of the government is a deliberate disruption of the right of the people to know information and the professional rights of the above media community.

In an atmosphere of crisis, the space for a the free flow of ideas and protest should be expanded, and the imposition of such repressive laws violates the people’s democratic rights, including freedom of speech and expression.

The Government and the Sri Lankan Police did not take any action regarding government supporters who, having left a meeting called by the Prime Minister on May 9 at his official residence, failed to prevent the brutal attack on the nearby demonstration and the ‘Gothagogama’ protest site.

Violent supporters of the government have attacked and injured large numbers of peaceful protesters and caused extensive property damage. It is reported that journalists have been among the injured, and terrorists have targeted and attacked journalists. Clergy and women have been severely attacked.

Police and Special Task Force (STF) officers attacked four Sirasa TV journalists who were engaged in reporting activities near the private residence of Prime Minister Ranil Wickremesinghe. This number rose by two, as police attacked two journalists coming to the aid of their colleagues. In such a crisis, the role of the media is to allow the free flow of information to the people. It is a duty performed in accordance with the fundamental rights mentioned in the Constitution. These journalists suffered an undeniable violation of their fundamental rights.

At the time of the attack, the concerned journalists were legally protected by Articles 14(1)a and 14(1)g of the Constitution and should not be subjected to torture, cruel or inhuman or degrading treatment as mentioned in Article 11 of the Constitution. They were entitled to their basic rights.

Sri Lanka is a signatory to the United Nations Convention against Torture, having ratified it in Act No. 22 of 1994. The police and STF officers who brutally attacked the journalists who were engaged in their reporting have also acted illegally according to that act.

It can be pointed out that the forced entry of two people who introduced themselves as activists during the period of these protests into the Sri Lanka Television Corporation, a state media organization, is damage to the use of free media as well as a loss of the integrity of the peaceful struggle that has taken place in the country so far. The democratic, non-violent, pluralistic and advanced cultural expression reflected by the struggle was widely praised as a precedent for a future Sri Lanka.

After Ranil Wickremesinghe was appointed as the successor President, on July 22, 2022, the security forces launched a brutal and despicable attack on the Galle face struggle grounds. Local, foreign and citizen journalists who reported the incidents were attacked and their equipment was damaged. The journalists have not yet received complete information about the attacks and damages. All the access roads to the Galle face battleground have been blocked and journalists have not had the opportunity to enter there even in the morning.

The attack was carried out despite the fact that the protesters had publicly announced that they would leave the premises of the Presidential Secretariat.

It can be pointed out as a violation of basic rights launched by the Ranil Wickremesinghe government against the arrest of Joseph Stalin, a senior trade union leader and a front-line social activist. Also, several university students who were involved in the struggle have still been arrested by the government under the Anti-Terrorism Act.

Finally, in the year 2022, Sri Lanka is facing the worst economic collapse in its history, and for that, the Public believed that the weaknesses in the economic and political management of the rulers who had ruled the country for more than a decade were the cause of this. The struggle started along a path, but the government tried to suppress the peaceful protests of the people by interpreting and implementing the legal provisions in an anti-democratic way. It can be pointed out that during the conflict between the government and the general population, arbitrary actions were taken by both the government side and the protestors’ side. For example, the counterattack on “Gota Go Gama” on May 9, 2022, by the public, the burning of the then Prime Minister Ranil Wickremesinghe’s house on July 6, 2022, and the forced entry into the  SLRCC. It should also be noted that the peaceful protest was defiled. Building a democratic society cannot be done by the ruler alone and the responsibility towards the general public cannot be underestimated. But we believe that if the people express their opinions in a peaceful manner, it is the responsibility and role of the ruler to listen to those opinions and respond to them in a responsible manner.

Gayathri Nawarathne is the program coordinator for the Free Media Movement, Sri Lanka.