Sri Lanka: The long road home for the exiled 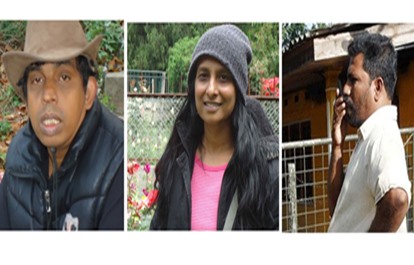 On April 30, 2015, three Sri Lankan journalists and human rights defenders (HRDs) Shantha, Jayampathi and Kumuduni returned home after several years in exile in Nepal and short periods in India and the Maldives[1].

All three had been recognized as refugees by UNHCR in Nepal, but had renounced their refugee status and opportunity for permanent resettlement in a western country. Instead they decided to return home after the former Sri Lankan president, Mahinda Rajapaksa, was defeated at presidential elections on January 8 this year.

These Sri Lankans had previously faced death threats, arrests and detention and harassments due to their opposition to the authoritarian Rajapaksa, compelling them to flee their homeland. I had been in touch with them during the time they faced threats in Sri Lanka as well as during their exile, and I know they went only as a last resort and longed to return. But they found out that return was more difficult than being relocated. Numerous appeals made by them to Sri Lankan authorities and UNHCR didn’t yield results for more than 100 days. Appeals by Sri Lankan, Nepali and international media organizations also didn’t yield results.

As I tried to assist them in return, I found that there are very few international human rights and media freedom organizations are ready to assist journalists / HRDs to return home and continue their work, although many had come forward to assist those at risk to relocate. Only the International Federation of Journalists (IFJ) and Frontline Defenders responded favourably to my appeals. Some didn’t reply for months and some claimed the nature of assistance required and generally the idea of assisting those in exile to return and continue work was not in their mandate. It literally took an earthquake to change the situation!

Exile is something close to my heart. I was also compelled to spend a few months in exile and when I returned, had to take complicated security precautions. I had often wondered about my complicity in assisting some of the most committed and courageous Sri Lankans to go into exile. In most of my overseas visits, I have met and spent time with those in exile and their families. I have also tried to keep in touch with families who had been left behind in Sri Lanka. In recent years, I found myself being called upon to assist exiled Pakistani HRDs coming to Sri Lanka. I often end up feeling frustrated, helpless and powerless to assist them in difficulties they face as exiles / refugees.

Hearing some wanting to return, especially friends and colleagues, has been extremely encouraging and empowering for me. But it is also frustrating to see that there is very little assistance available from the Sri Lankan government and the international community to that end. This should in no way undervalue the care, concern and support of some foreign governments, international media and human rights organizations and even individuals, who had come forward to offer protection and assistance to journalists and HRDs, including me, during very difficult and dangerous times.

Two exiled journalists / HRDs in Europe have also told me they have renounced their refugee status and are going to return to Sri Lanka in the coming months. Others have told me they may come later if the situation is conducive and safe for their return. Amongst those planning to return temporarily in the coming months is Poddala Jayantha, a well known journalist and press freedom activist who fled to India in the face of death threats. He returned to Sri Lanka and was then again compelled to leave for the US after a brutal assault and death threats as he was recovering. Poddala’s wife told me she is still very scared for his safety if he returns.

Of course, some may have left even when they didn’t face serious risks, and they are unlikely to return from what they may consider greener pastures. This is article is not about them.

Government invitation to return – going beyond the rhetoric

Immediately after the January 8 elections, the new government invited exiled HRDs and journalists to return.

However, an absolute pre-requisite for HRDs / journalists in exile to return is to ensure there are no continuing harassments and threats to HRDs and journalists. In this regard, some of the recent incidents reported in the media, some of which I mentioned in an article on World Press Freedom day[4], will further discourage exiled journalists and HRDs from returning home. A second factor is to indicate clear progress in ensuring justice and accountability for previous attacks, threats and violence against HRDs and journalists, including against some of those in exile who are considering return.

As I tried to assist Shantha, Jayampathi and Kumudini in their struggle to come home, I felt that bringing home exiled journalists / HRDs home was not a priority to the new government, and that it was more a propaganda statement. However, the return of Shantha, Jayampathi and Kumudini gives me more hope, that there will be government and societal support for others in exile also to return. If the new president, Maithripala Sirisena, and his government are serious and genuine, they should establish a concrete program of action to assist exiled HRDs and journalists to return without further delay. Below are some ideas that could be considered;

International and regional organizations must be proactive and creative. They should review their mandates, if necessary, in order to contribute towards actual needs of HRDs and journalists who want to return home to continue their activism and journalistic profession. Foreign governments which have adopted policies and practices, including formal guidelines on human rights defenders and freedom of expression (such as the European Union, Norway and Switzerland) could consider support for those who want to return within the framework of these guidelines and policies, including financial support and diplomatic initiatives in relation to challenges such as ones faced by Shantha, Jayampathi and Kumudini in Nepal.

Most of HRDs and journalists who had gone into exile have suffered terribly – before they went and after being exiled[5]. Their families have suffered. They had to give up a lot. They deserve respect and understanding for their decisions to stay away or return. If and when they want to return, they should be supported morally, politically and financially, considering specific needs and whether the return is permanent or temporary.

Ruki Fernando is a Sri Lankan writer and human rights / press freedom advocate. He has a court order restricting his freedom of expression in relation an ongoing investigation on anti-terror charges. His writings are available at www.rukiiiii.wordpress.com

[5] For more on reasons that led to exile and life in exile, and names of some journalists in exile (as of May 2013), see  http://www.ceylontoday.lk/59-31472-news-detail-exiled-from-journalism.html