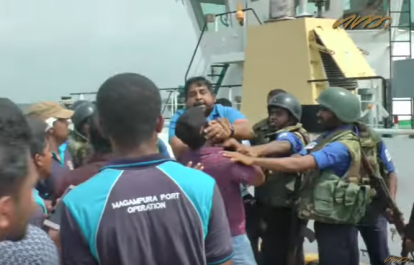 The International Federation of Journalists (IFJ) joins the Free Media Movement, Sri Lanka (FMM) in condemning the attack by the Sri Lankan Navy commander on a journalist at the Magampura Port in Hambantota, Southern Province on December 10. The IFJ demands immediate action against the commander.

Navy Commander Vice Admiral Ravi Wijayagunaratne assaulted Roshan Gunasekera, a local correspondent for The Island and Divaina dailies, while the journalist was reporting navy action to open the port blocked by protesting port workers. Video footage recorded by other journalists showed the navy commander darting towards Gunasekera, assaulting him and using foul language.

Gunasekera later said: “I went to the Magampura Port to report the protest by the port employees. While I was reporting the event, a naval officer in civil clothes came to me and asked what I was doing there. I told him I was from [the] media and showed him my media accreditation card. Then he grabbed me by my neck and dragged me. [Then] the Navy Commander came there and I told him that I was from [the] media. He abused me in filthy language and assaulted me.”

The FMM urged President Sirisena to commence a special investigation and take the necessary legal action so that those who attack journalists, however high their positions, cannot get away with impunity. The FMM said: “The Navy Commander led the attack. He has also chased away the journalists, beating and scolding them using obscene language. This is a very serious incident.” The FMM deplored the assault at a time when the right to information is guaranteed by an Act, and said: “Even though affirmed to establish a better media culture, such media suppression is a blemish to the whole country.”

The IFJ said: “The assault of a journalist by the Commander of the Sri Lankan Navy is a condemnable act. The IFJ is seriously concerned by the assault of a journalist by the head of a security force and demands immediate action against him from the Sri Lankan government. Such an incident, if allowed to pass, not only undermines press freedom and the rights of the media but also has a chilling effect on free press.”