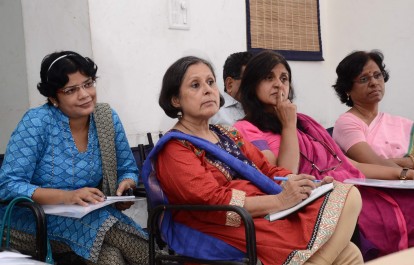 The women journalists who run a multi-edition rural weekly in north India are used to making the news – not figuring in it. Recently however the women of ‘Khabar Lahariya’ were in the news, although for all the wrong reasons.

For months these women had been receiving obscene calls from a stalker. They made complaints to the police but the cops did nothing about it.  Finally, when the editor of the paper wrote about it in a feminist e-zine, it got tweeted about. The exposure on social media got the government moving. The office of the Chief Minister of Uttar Pradesh state pulled up the police and presto they produced the (alleged) offender!  A man who possessed 40 SIM cards which he used for making calls.

The harassment he had subjected the women to was extreme. He would call night and day, while they were working in the office, out in the field or at home cooking. He would call them turn by turn, using different numbers. Being journalists, they had to take any calls that came in, because many calls were from their news sources. They couldn’t just turn off their mobiles. If they didn’t answer he would message them repeatedly. When they stopped speaking to him he managed to have the SIM cards of four journalists temporarily blocked by the phone company.

The stalker would talk sexy, be abusive, even put them on ‘conference call’ so that a bunch of other men could listen in. Sometimes he would wake them up at night, threaten to rape and kill them.

The women, most of whom have been working with the paper for years and considered themselves hardened journalists, found the calls traumatic. They began to fear that the stalker might appear in person and attack them.

Over the next months they filed complaints with three different police stations. It was embarrassing to report that they were being harassed, especially when policemen smirked and asked them to repeat the abusive language the stalker used. This is how Kavita, the editor, described the experience in her article in the e-zine “The ladies finger”:

“I went to the Banda police station almost every day, to ask what was happening with the arrest. Apparently the calls were “under surveillance”. I had a surreal sense of being in one of my own stories, watching myself pleading with the cops in the police station– this dingy, repellent, male space –being scoffed at, made to perform, repeatedly, each time someone new wanted in on the joke. Speculations flew around the room, about the mystery Nishu (the stalker) – he must work in a phone company, manage cell phone towers. But apparently he was untraceable.”

On two occasions she received calls while at the police station. The policemen spoke to the stalker but it made no difference. He persisted in his behavior.

Eight months later, when the story was picked up by social media, the journalists were suddenly called to the Banda police station and asked to identify the stalker. They did not recognize him but they definitely recognized his voice.  It had taken all of two days since the publication of the story for the police to arrest him.

The journalists were called to the state capital and given a tour of the Women’s Helpline but they were not impressed. The Helpline had been of no help in their case. They wrote a reluctant thank you letter to the Chief Minister for his intervention, reminding him that the police could have acted months before and saved them much stress. They pointed out that countless women in the state went through such ordeals without any redress.

Photo credit: Delhi Union of Journalists (DUJ). Indian female journalists discuss the challenges for women journalists in India at the IFJ and DUJ training in September 2014.