Taking on the fight for better working conditions 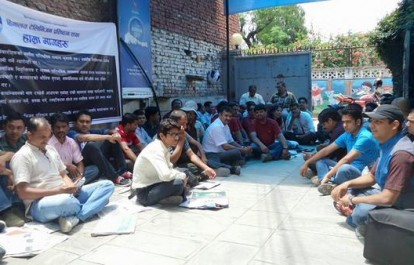 In Nepal, we are still slowly recovering from the disastrous earthquake in April and May. A lot of challenges and opportunities are in front of us. On the one hand, we have to ensure support to more than 1,000 journalists affected by the earthquake, and on the other hand, we need to widen our initiatives for effective implementation of the Working Journalists Act (WJA).

The effective implementation of the WJA has remained issue among journalists for long time. The new executive committee of the Federation of Nepali Journalists (FNJ), in its first meeting, decided to take concrete action for the WJA, including ensuring lobor-friendly media houses. The first step was to identity problems and find solutions amicably through open dialogues.

The FNJ met with the Nepali Prime Minister and the Minister for Information and Communication demanding effective implementation of the WJA as the government’s indifference in its implementation is a major reason behind problems for working journalists.

A meeting between all the Presidents of FNJ in-house committees was called to identify the issues and problems. Following the meeting, FNJ invited media house management to attend a meeting to discuss and called for them to implement provisions of the WJA including appointment letters, minimum wage and payment of due salaries.

However, not all media houses were open to discussion and there were minimal signs of improvement. In that context, the FNJ on June 15, decided to hold a protest at one of the media houses identified as having serious issues.

Three television stations – Himalaya TV, Avenues TV and Mountain TV – were chosen because the journalists at those networks have been facing problems for a long time; and managements have ignored agreements.

On June 16, FNJ called an-hour-a-day strike at Avenues and Himalaya TV and issued a five-point demand. The five-point demands included: 1. Payment of due salaries to journalists and media staffs; and timely payment of future salary; 2. Immediate implementation of the WJA including appointment letter and minimum wage; 3. Guarantee of physical safety of journalists; inclusive and gender-friendly working environement; 4. No action against journalists for participation in protests; and 5. Implementation of earlier agreements.

Avenues TV agreed to fulfill all demands on June 16. Himalaya TV agreed to fulfill demands after three days of the protest. The journalists in Mountain TV also initiated protests and reached an agreement with the management. There are problems in other media houses and we are trying to solve them through open discussions.

The FNJ has asked all FNJ in-house committees their problems and submit valid demands to the management, and if possible, hold talks with the management. The FNJ will initiate protests if the management ignores the demands.

Suraj Acharya is an executive committee member of the FNJ.