The censorship behind Pakistan’s Bol scandal 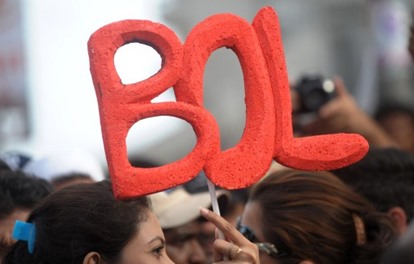 It was the most anticipated launch of a TV channel in Pakistan in over a decade years. Not since Geo TV – the first independent TV channel of the country – was launched in 2002 had so much hype been built around the launch of a current affairs broadcaster boasting what many considered was a ‘dream team’ of some of Pakistan’s best journalists, opinion makers, anchorpersons and analysts, mostly poached from a market of over 30 rival news channels.

Delayed for over a year but finally expected to make a splash around mid-August 2015, the Bol TV venture now looks all but grounded with rapidly diminishing prospects of being a formal current affairs enterprise. On the morning of May 29, 2015, the country’s electronic media regulator, the Pakistan Electronic Media Regulatory Authority (Pemra) ordered the management of Bol to halt its nascent test transmission and postpone the formal launch pending the outcome of a high-profile investigation of fraud charges against the channel’s parent company Axact.

This was the first time the regulator has pre-empted a licensee from operating, effecting a still birth. The action came at the heels of a high-profile crackdown against Axact triggered by a damning expose by New York Times around mid-May 2015 indicating that the firm was involved in illegally making tens of millions of dollars selling fake university degrees to a global clientele.

While the authorities made a swoop on Axact, arresting its owner Shoaib Sheikh – who also co-owns Bol – seizing materials, sealing the IT offices and filing a case with the police, there have been no formal charges against Bol. The order served by Pemra on Bol preempting its public launch has created a furore and not just among its employees. Increasingly civil society, rights groups and political parties are voicing concern against this extreme step. So why the brouhaha and what does the action against the latest in the series of TV channels becoming operational part of Pakistan’s burgeoning broadcast sector portend?

For starters, the procedural action against Bol seemingly overturns the normal judicial system of presumption of innocence against an accused party until the due process of law has been completed and eventual indictment leads to an adverse conviction. Not just were there no charges against Bol TV when it was forced shut, but considering the legendary slow justice system of Pakistan where it can take years before guilt is established in compliance with law, even Axact against whom the principal action revolves there is a long way to go before it can be legally proceeded against. In view of this, Pemra’s action of halting Bol’s operations is not just hasty but also presumptuous in terms of any wrongdoing.

Then there is the urgent issue of the 2,300-plus employees of Bol media house including hundreds of journalists hired over the preceding year and readying to add to the pluralisms of Pakistan’s boisterous private broadcast sector that boasts over 100 TV channels, including over 30 news channels, and close to 150 radio stations. With Axact’s owner arrested, its accounts frozen and Bol, which is a separate business unit not mandated with or involved in any non-news business, stopped from working, the economic and immediate professional future of a large number of journalists has become clouded in a matter of days. If Bol doesn’t come online soon, this would constitute the largest number of journalists losing their jobs in a single instance in Pakistan’s history, if not globally.

While the initial institutional reactions of Bol’s competitor media houses have been hostile in favor of the channel’s misfortune with a chorus of unified demand for strict action against Axact and for Bol to be shelved, there has been a growing parallel demand from Pakistan’s 18,000-strong community of journalists against penalizing Bol media and its large number of employees, including hundreds of journalists for any sins of omission or commission by its parent company Axact, especially when formal legal action against it is yet to begin.

The haste with which the government authorities – the Federal Ministry of Information and Broadcasting requested Pemra to stop Bol from working – has raised concerns about what media and political watchdogs have said represents an undeclared policy of the ruling party to be gag media and be trigger happy when it comes to browbeating media. Stopping Bol is censorship by another name.

In mid-2014 the government through the Pemra managed to ban Geo TV for two months and fined it for alleged treason after it ran accusations of involvement against one of the country’s intelligence agencies for an assassination attempt on the life of its most famous journalist Hamid Mir. The government also supported charges of blasphemy against Geo TV and ARY TV in 2014. The government has also not opposed a directive in early May 2015 from print media regulator Pakistan Press Council (PPC) to the All Pakistan Newspaper Society (APNS) asking that its hundreds of member publications stop criticizing friendly Gulf States for fear of adversely affecting bilateral state relations.

Not only does the executive action against Bol amount to undue censorship considering that Bol has not been even charged with any wrongdoing leave alone indicted, prosecuted and convicted, the fact that Pemra, supposedly an independent regulator, acceded to a written request from the government to stop from operating means that the legal framework governing the media is witnessing a breakdown in mission and procedural compliance. This indicates a dangerous willingness on the part of the regulator to not just breach its own mandate of being a protector of the broadcast sector but also undermine its raison d’etre of being a regulator independent of executive influence. This can only mean trouble for the dozens of Pakistan’s news channels and radio stations that already face an array of threats to their own mandate of being the guardians of public interest from a wide group of threats actors, both state and non-state.

Worse, a divided house means the media groups in Pakistan are only strengthening their detractors by first not agreeing that extreme executive action against individual media enterprises represents an attack on the entire media sector, and second allowing an undermining of the right to freedom of expression and access to information guaranteed in the Pakistani constitution as Articles 19 and 19A respectively. Instead of cheering the demise of the newest member of their community, the media sector should be worried that the government authorities and the media regulator are increasingly assuming the role of the enemies of the media and its 18,000 journalists and over 250,000 media workers by being able to shut down a TV channel at the proverbial stroke of a pen without establishing guilt.

Adnan Rehmat is a Pakistan-based media analyst and activist. He tweets at @adnanrehmat1