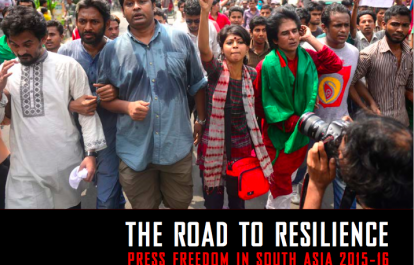 The International Federation of Journalists (IFJ) and the South Asia Media Solidarity Network (SAMSN) marked World Press Freedom Day by releasing The Road to Resilience: Press Freedom in South Asia 2015-16. The 14th annual report documents the press freedom situation, national and regional activities to empower journalists and capsule reports on important issues of South Asia over the past year.

Thirty-one journalists, bloggers and media workers were killed in the period under review (May, 2015 to April, 2016) with India emerging as one of the most dangerous countries for journalists. Afghanistan and Pakistan continued to remain dangerous places for journalists but the most concerning series of events were recorded in Bangladesh.

“Press freedom is not a guarantee across South Asia, and without the support and leadership of South Asia’s leaders, governments and legal apparatuses, press freedom will cease to exist,” the IFJ said.

This year’s press freedom report has built on the findings from the 2015 report, commissioning capsule reports on Bangladeshi bloggers, Chhattisgarh in India, Kabul and Kunduz in Afghanistan along with country-wise press freedom situation analysis for all eight South Asian nations, chapters on impunity, gender and media, and an annexure of list of incidents of major press freedom violations.

The IFJ said that the resilience of South Asia’s media community is a testament to the state of press freedom across the region. In Bangladesh, the battle for freedom of expression has come at a great cost, with seven bloggers killed in the past three years, the most recent, Nazimuddin Samad killed just last month. These horrendous murders are part of a broader project in Bangladesh to silence critics, taking away free speech and freedom of expression.

Building on IFJ work and research into gender equity in the media, this year’s report also documents the growing issues for women in the media in South Asia, with a particular spotlight into online harassment and trolling of women journalists. The report documents the stories of strong, independent female media workers, harassed, intimidated, threatened and attacked for simply doing their job. But the chapter also documents women journalists who, against all odds, are forging new ground and creating a better working environment for themselves and their female colleagues.

While the outlook can appear bleak, South Asia is making progress. Pakistan had a win against impunity, convicting the killer of journalist Ayub Khattak, and Sri Lanka continues on its path to rebuild the media, with arrests in the disappearance of political cartoonist Prageeth Eknaligoda. Each of these are steps in the right direction, giving hope to the media community, that over the past 12 months has battled to make their voices heard.

The report, supported by UNESCO, UNDEF and the Norwegian Ministry of Foreign Affairs, is also a key tool for advocacy on issues such as press freedom, impunity and gender equity in the media. The IFJ added: “Despite the dangers, the journalists in South Asia are not only focussed on presenting the true story to the public, but also are also working equally hard to ensure people’s right to freedom of expression and press freedom. The journalists are taking their battles to the courts, streets and online space for advocacy and building unity and solidarity for campaigning on common causes.”

Download the complete report here or go to Resources/Reports page.