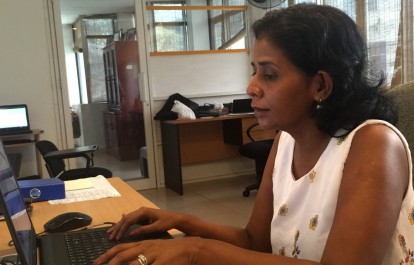 2012 was still a dangerous time to be a journalist in Sri Lanka. The 27-year civil war ended in May 2009, but the president who oversaw the final stages of the war, Mahinda Rajapaksa, continued to rule over this island nation of 21 million with an iron hand. Sri Lanka’s media became state-controlled and served as a mouthpiece for the government, even as some refused to conform. Dissent was not tolerated. Sri Lanka at the time was one of the most dangerous places in the world for journalists to live and work.

And yet, in the midst of all this impunity, it was gender-based hate speech that finally drove Muslim writer and blogger Sharmila Seyyid from her home in eastern Sri Lanka into exile in India, where she remains today.

Sharmila’s story begins with an interview she gave on the Tamil Radio Service of the BBC in 2012. In the interview, Sharmila said that in her opinion, sex workers might have more protection if prostitution was legalized. This opinion, voiced as a response to social issues, unleashed a firestorm from the Muslim community.

The primary landscape for the attacks on Ms. Seyyid was online. She was threatened on social media with “rape” and “murder” until she was forced into hiding.

At that point, her sister became an object of the attacks which even interfered with her ability to look after her parents. Sharmila’s sister demanded justice from the police and the Human Rights Commission, but no action was taken. Muslim civil society issued a statement of support for Ms. Seyyid and her family, but again, no actions were taken. 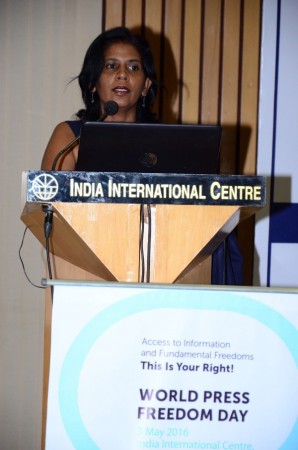 As Regional Gender Coordinator of the International Federation of Journalists, Dilrukshi presents an overview of the UNESCO-IFJ Annual Press Freedom Report on World Press Freedom Day in May, 2016. Photo credit: UNESCO

The renowned journalist Dilrukshi Handunnetti tells me this story over tea in March of 2016, a time when the repression of the Rajapaksa regime is in the past and the new regime of Maithripala Sirisena has promised widespread media reforms. In fact, until recently, Dilrukshi was one of the professional journalists employed to oversee the editorial work at the state media’s English language paper, the Sunday Observer.

In this hopeful moment, when there is so much work to be done to reform and professionalize the media and information landscape, sexual harassment and intimidation both online and offline tends to slip into the background of top issues. Even so, it remains one of the most powerful barriers to women entering and rising within the profession.

“It’s the silent crime as nobody dares to speak,” Dilrukshi tells me.

Dilrukshi in 2015 completed a survey on women in the media in Sri Lankafor the International Federation of Journalists (IFJ). Based on survey result, she says that 29% of women in the media reported they had witnessed or experienced harassment in the workplace. Of those who had experienced it, 69% reported it was from a colleague, often a superior.

“Statistically, most women are driven out of newsrooms because of sexual harassment. We all go silent because generally the aggressor is your supervisor. It takes so much empowerment to get women to speak up about it,” she said.

In the study, Dilrukshi recounts the story of a young women who told her, “When I complained to the department head that I was being harassed sexually by the associate editor, there were other men who were old enough to be my father, advising me ‘not to upset colleagues.’”

As challenging as workplace sexual harassment is, online hate speech against women forms a second serious and growing issue. Many journalists, Dilrukshi included, experience online harassment and hate in response to their work.

“I have seen how personally and professionally damaging it can be. Sometimes it is so hurtful, you don’t engage. That’s another reaction I have noticed. Women at some point go away, because you don’t want to get into that intense battle out there,” she said.

As Dilrukshi explained, “At some point, I used to think these behaviors were a result of patriarchy, the whole business of looking at women in a particular way. I think now that the trolls simply understand the best ways to bring women down and what hurts them the most. Women get these comments that attack their dignity as a person. It is by design.” 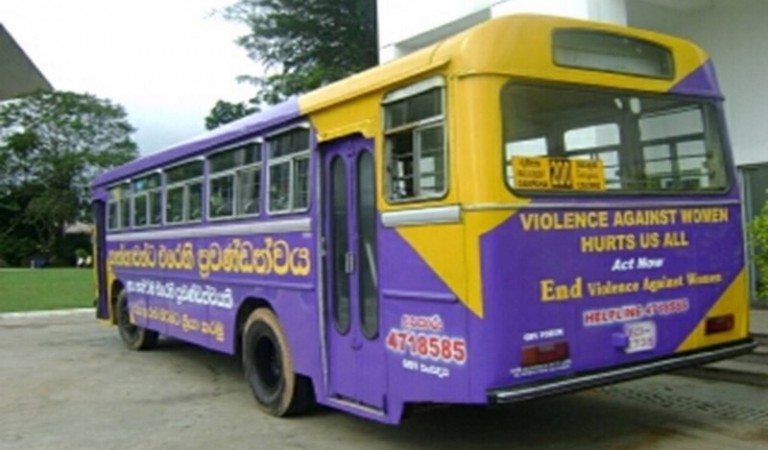 For the 16 Days of Activism against Gender-Based Violence campaign in Sri Lanka in 2009, a bus toured the island to spread the message that “Violence Against Women Hurts us All.” (credit: CWGL/CC)

Dilrukshi’s most recent experience of being personally attacked on social media occurred in early April, triggered by her decision to resign from her job at the Sunday Observer.

“My decision to quit the organization was a personal decision and suddenly it became a news story and commenters on social media twisted it into something else. They seemed to know more about me than I did, but that’s the nature of online abuse. They hide behind a cloak of anonymity and make comments that journalism would require attribution.”

“And the fact is that you can always go back and read those comments and they are there forever,” she added.

Dilrukshi’s study found that 77% of women went into media because of their “love of journalism.” This love starts to wear thin when one is barraged both in the newsroom from colleagues and in response to their work online.

Dilrukshi firmly believes that the systems have to change, starting at the top.

“We have to establish policies and processes to address this. We need a mechanism that offers redress for sexual harassment. It is not just about sharing experience. Something has to happen so that a woman will feel safe enough to come back to the editorial team and not be glared at and spoken ill of. She should be able to continue with her work. I don’t see most newsrooms doing that,” Dilrukshi said.

In the absence of gender policies and redress mechanisms, women journalists in Sri Lanka are reluctant to complain about the long-standing culture of harassment that characterizes many newsrooms. One significant barrier is the fact that the management structures of all the major media organizations in the country are often all-male. While there are a handful of women editors in Sri Lanka, no women have yet broken the glass ceiling and joined the management ranks. Gender policies are not supported from the top or promoted as an industry best practice at any other level. 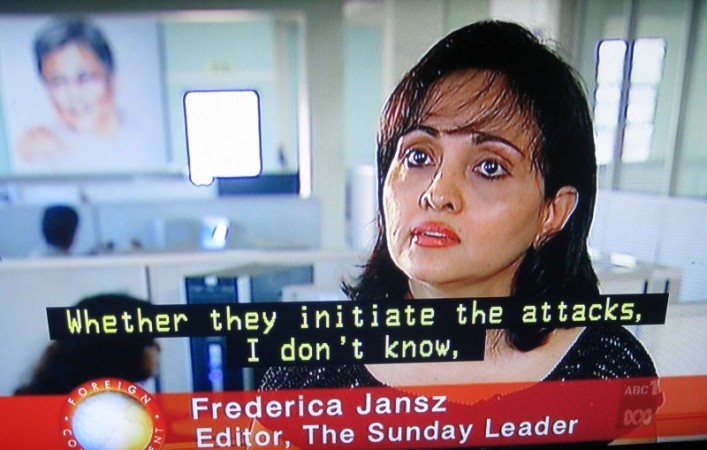 Frederica Jansz is a Sri Lankan journalist and was editor of The Sunday Leader from 1994 until 2012. She was highly critical of Sri Lanka’s government and was subject to frequent intimidation and harassment. (Credit: RubyGoes/CC)

She feels that though the process is slow, changes are starting to be felt. State media is becoming less biased and more equitable, though it still has a long way to go. “There is more engagement and the industry does have conversations that are futuristic.”

“We are ripe for change. But the lens must not just be only gender. We need to think about ethics, values and institutional mechanisms as a whole. It has to be addressed at that level, where institutions take it on board. You cannot call yourself an equal opportunity employer if your women employees may be experiencing harassment. If you are an equal opportunity employer, you should ensure that you are not only hiring, you are making the conditions so that women can stay on, work and progress,” Dilrukshi concluded.