Through A Female Lens 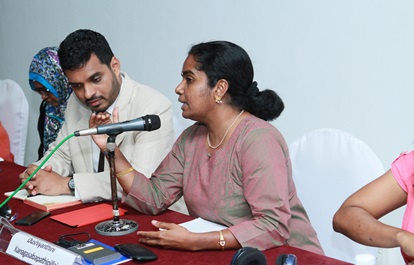 For senior photojournalist and trainer, Dushiyanthini Kanagasabapathipillai, the proverbial glass ceiling was visible from the day she commenced her journalistic career on May 1, 1993. Twenty years on, much to her regret, the only improvement she finds in the Tamil language newsrooms is the availability of technology. “There is no qualitative evolution, in skills or in concepts,” she says.

Kanagasabapathipillai entered journalism to do “alternative work” and to cover “sensitive issues that Tamil women were discouraged from touching, even when women were directly and deeply affected.” She began her career as a trainee journalist at the Colombo-based Tamil daily, Virakesari and since then, her professional journey has often brought her into conflict with the male hierarchy and women who reinforce gender stereotypes.

“I was hired after a series of interviews by all-male interview panels. I was asked about my marital status and whether I would quit upon marriage. They asked me whether my family approved of my career choice,” she recalls.

She belonged to a batch of 10, including three men. She was the only woman who wanted to do field reporting but was promptly assigned to translate Reuters copy to Tamil.

“Other women were happy to be desk bound but I was not. So I resisted and wanted to be sent on assignment. Being an open newsroom, there were other problems such as constant bullying of women by men. I was a prime target because I had short hair and constantly wore jeans. It was pointless to complain because this was considered the ‘normal’ newsroom atmosphere.”

When she insisted on being sent out on assignment, her immeediate supervisors cautioned that “it was unsafe for Tamil women to do field assignments.” Thanks to her English language skills, she was sent on other assignments such as to cover the visit of Princess Anne, which also earned her male colleagues’ wrath.

On her own, she began compiling articles “of a serious nature.” They appeared in the editorial pages, often sans her by-line. She said: “In that male-dominated newsroom, women were considered subservient to men. The editorial practices were discriminatory.” When she wrote on women in politics and leadership roles, her articles were rejected and she was warned against her alleged efforts to change Tamil culture.

As for her women colleagues, Kanagasabapathipillai says: “Tamil newsrooms have more women. So it is not about representation in terms of numbers. Their impact on content is missing. Women hardly challenge male colleagues or undertake serious work. They also prefer desk jobs but complain about lack of opportunities. For many of them, it is a job – until the next job or until marriage or migration. There is no real interest in pursuing a career in journalism.”

Traditionally, women are put in charge of women’s pages and/or culture/arts, she said. “It is as if we know nothing else and have no other contribution to make. But women accept this without any protest!”

She also claims that there is no “equal pay for equal work” in Tamil newsrooms. Moreover, there are strong prejudices against women and as a result, they are not entrusted with certain types of responsibilities. The stereotypical content offered to women readers/audiences is therefore, generated by women for women, so she thinks they too are not free of this responsibility. “Just like the pages they put together, their discussions are often about recipes, fashion and stuff like, using cucumber packs to look good for a husband.”

Many Tamil women journalists did not report on the impacts of war. Many felt it was an unnecessary risk- taking. “When they did report, they took sides, lacked the professionalism to put things into perspective and to rise above their ethnic angle,” she said. “I often felt that there should have been strong training offered to journalists on conflict reporting, especially for women. That perspective has largely gone missing as a result.”

The risk-taking Kanagasabapathipillai subsequently joined the BBC which gave her greater access to the war zones as well as a new perspective. She moved into complete “male territory” and soon proved resourceful in terms of contacts and access.

Today, the self-starter and self-learner is working as an independent journalist. After two decades of risky journalism, many Tamil women journalists consider her as a role model, a woman whose career is hard-built, without any support from systems and newsroom mentors.

“If there is true admiration, then they must develop strong careers and relentlessly pursue their dreams,” she said.

In 2012, when Kanagasabapathipillai researched on female ex-combatants and their social reintegration, none of the Tamil newspapers were willing to publish her findings. Instead, she was told the reintegration process was correct and that ex-combatants were well- treated.

“During research, I was closely monitored but I was not going to give it up. As someone consistently covering the conflict, I saw post-war stress experienced by women. But our media hardly provided space for that perspective. The war is over. The story is incomplete. There is a missing half,” she insists. “Women often create their own limitations, in addition to socio-cultural limitations. Women themselves reinforce stereotypes. Now that there are fresh openings, they still refuse to explore.”

It is difficult for Tamil women journalists to be organised largely because there is no cultural and institutional support. “An effort was made over a decade ago as women had very unique issues to address. Somehow, we could not make it work,” she admits.

The only media organisation for Tamil journalists at present does not have a constitution, and until recently, did not have a single female in the executive committee. As the current Secretary of South Asian Women in Media (Sri Lanka Chapter), Kanagasabapathipillai feels that for the first time, there is a network for women journalists in the island, able to work in all three languages and ready to take on different issues.

“There are about 200 members and regional co-odinators. We have pioneered safety and gender training for women. Above all, it is a platform for building skills and concepts,” she said.

Meanwhile, Kanagasabapathipillai has moved beyond the printed word to take on other serious tasks – as a blogger and photojournalist, expanding her career, outreach and impact.

There are more women with camera slung across their shoulders today but there are no moving images emerging from those cameras. “Photojournalism is very much a male preserve. I am always in the midst of men, doing what many consider a man’s job.”

“I look through my lens but I clearly see differently. There is essentially a perspective that is female. Sadly, there are no women photojournalists in the north. In Sri Lanka, women journalists still prefer to walk behind their male colleagues and that’s self-defeating.”

Through A Female Lens is from a series of stories that the International Federation of Journalists Asia-Pacific released as a special report for the 2015 International Women’s Day. Click Here to read more endearing tales.