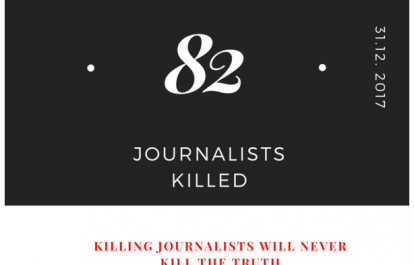 The stories and tragedies in the report reveal, that although there is much to welcome in a year when the number of work related killings of journalists fell to their lowest level in a decade, the death toll in journalism remains unacceptably high.

“The roll call of tragedy and loss covered in these annual reports are devastating to the journalists’ community,” said IFJ General Secretary, Anthony Bellanger. “However, the best tribute we can pay to the victims is to unrelentingly mobilise and work tirelessly to lift the shadow of impunity which has been over journalism for far too long.”

In many countries journalism remains an extremely perilous profession, including Afghanistan, which recorded the highest number of suicide attacks and Mexico with a record number of targeted killings (13), most of them victims of exposing local corruption and collusion of organised crime and drug trafficking criminals with the local authorities.

The report highlights the pressing challenges to journalists’ security across the globe. They range from opposition to the media as a crucial pillar in democracy in certain parts of Africa, to the failure of holding accountable those who kill journalists in some European countries, to the reign of terror by organised crime in Latin America, terror attacks in Asia Pacific and the Middle East and Arab World and frontline violence in the latter.

But it also features pro-active initiatives by the IFJ and its affiliates showing their determination to work together for change. One of them is the IFJ’s proposal for a new international convention on the safety and independence of journalists and other media professionals, which is to be proposed for adoption by members of the United Nations. The convention aims at providing a real means to enforcing existing laws in order to hold accountable those who attack journalists.

Other initiatives concern efforts to fight the media safety crisis in the Asia-Pacific region, where IFJ affiliate in Nepal (FNJ) and the Philippines (NUJP), have established effective media monitoring networks to keep tabs on the media environment and continue to push for meaningful change. In Iraq, a national committee on the safety of journalists and impunity was established following a campaign led by the Iraqi Journalists’ Syndicate (IJS) which coordinated the process and hosted several meetings.

“Through this in-depth report, the IFJ pays tribute to all our brave colleagues who last year paid the ultimate price to unveil the truth. The IFJ and its affiliates all over the world keep fighting and developing new ideas and initiatives in order to put an end to the safety crisis in media, building stronger trade unions to protect journalists and media workers. There is much that has been done but today we don’t forget the continuing challenges we must face together within the profession in terms of the safety and labour rights of our colleagues. This must be tackled notably by the fight against the scandalous impunity that surrounds most killings of journalists,” added IFJ President Philippe Leruth.