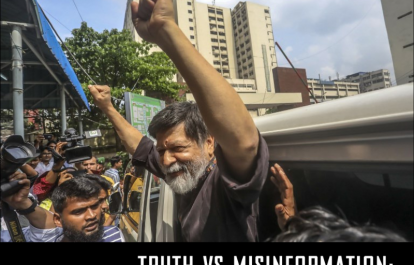 Today, the International Federation of Journalists (IFJ), the South Asia Media Solidarity Network (SAMSN) and its affiliates launch the 17th edition of the South Asia Press Freedom Report – Truth vs Misinformation: The Collective Push Back. The report was launched in the Maldives by UNESCO New Delhi.

The IFJ said: “This 17th annual review of journalism in the region, Truth vs Misinformation: The Collective Push Back charts the challenges, triumphs and, most importantly, the solidarity of this region’s brave and determined media community over the past year. While battered by the ugly game-changing rise of fake news and the collapse of media’s traditional economic model, journalists, media workers and their unions again and again, showed they were defiant, bold and determined to confront a myriad challenges.”

This report shows that in spite of war mongering, the damaging impacts of fake news and hate speech, and the politics of control, South Asia’s media workers made it very clear that they have a decisive role to play in fighting the scourge of misinformation and supporting democracy and human rights. And most importantly they have a leading role in truth-telling.

Featuring Bangladeshi journalist Shahidul Alam on the cover, the report documents the ongoing challenges to press freedom in South Asia. Alam’s case was significant and epitomizes the challenges for many journalists as they battle the scourge of ‘fake’ news. Across South Asia journalists mobilized in solidarity to condemn Alam’s arrest.