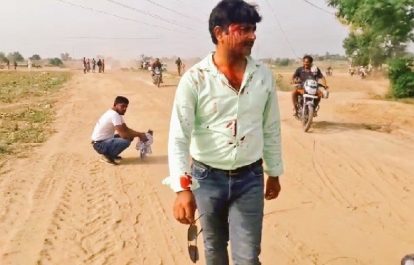 Journalists Sandeep Kumar and Neeraj Bali of News18 TV were attacked in Jalalabad in Punjab, India on July 30 while reporting on the illegal sand mining. The International Federation of Journalists (IFJ) condemns the attack on the journalists in Punjab, India and demands urgent action from the authorities to arrest and punish the attackers.

Journalists Kumar and Bali, after receiving a tip off, had gone to the site to investigate illegal mining when they were surrounded by a mob who attacked them and damaged their video equipment. Both suffered head injuries and their video equipment was damaged. The police didn’t respond to their calls for half-an-hour and only took action after the reporters, who were told to seek police protection at the civil hospital, went to report the incident to the deputy superintendent at the police’s office.

Punjab Chief Minister Amarinder Singh condemned the attack. He tweeted: “Strongly condemn the unfortunate attack on the News18 team in Jalalabad. Have asked the Punjab Police DGP to take stern action and bring the culprits to justice immediately.” He later added that police had registered the complaint and was investigating.

The IFJ said: “The IFJ condemns the attack on News18 journalists in Jalalabad, Punjab in India. It’s unfortunate that journalists in India are not allowed to carry out their professional duties freely and in independent manner. The attack on journalists is an attempt to keep the media from reporting illegal activities and action should be immediately taken against the attackers.”