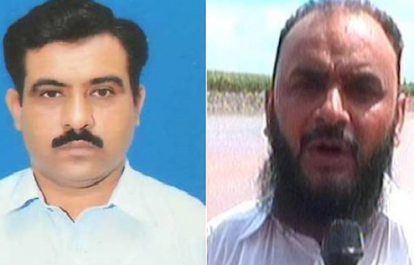 With the tally of journalists killed in Pakistan now reaching 13 this year, the IFJ has demanded that the Pakistan government must take serious action on protecting the country’s media workers and heed global calls to tackle the country’s shocking impunity problem before more lives are lost.

Pakistan grimly leads the world in the killing of journalists in 2014, according to IFJ figures. The IFJ Killed list now places Pakistan as the most deadly country for journalists – ahead of Iraq, Afghanistan and Syria.

According to reports, Nadeem Hyder (pictured left), a correspondent for daily Dunya, was shot dead by two unknown assailants in Kaliki Mandi area of Hafizabad on Friday, October 3. The killers fled the scene. Local police are said to have registered the case and begun an investigation.

Two days later, on Sunday, October 5, unknown gunmen shot dead Yaqoob Shehzad (pictured right) while he visited the office of a friend in the city’s busiest neighbourhood, Sagar Road. Shehzad, a correspondent of TV channel Express News, was shot in the head three times and was pronounced dead upon arrival at a hospital. According to eyewitnesses, the gunmen arrived at the office and opened indiscriminate fire, which injured an office assistant. The assailants fled from the scene immediately.

Shehzad, a father of four, had been working with Express News since the channel was launched in 2008. He was also the chairperson of the Hafizabad Press Club.

The Punjab Police registered the cases and vowed to arrest the assailants as soon as possible. Chief Minister of Punjab Shahabaz Sharif has reportedly also taken notice of the murders and instructed police to ensure early arrest of the murderers.

The PFUJ said: “This seemed to be a new wave of target killing of journalists in Pakistan. The PFUJ is concerned over the current wave of killings and demands the government to provide protection to the working journalists.”

“We have been demanding the government to provide security to the media men but no attention is being paid and the issue is getting more and more serious.”

Threats and attacks against journalists continue to increase in Pakistan as the country’s key opposition parties intensify demonstrations against the government. During recent protests many journalists; media staff and media houses came under attack from both the state and opposition.

“The situation facing media workers is horrific with threats and assassinations on a number of fronts,” said IFJ acting director, Jane Worthington. “The time for the Pakistan government under Nawaz Sharif to take its obligations to protect journalists is seriously overdue.”

“Impunity for the killers of and perpetrators of violence against journalists only serves to fuel a cycle of killing. It also serves to intimidate broader society and undermine public confidence in the rule of law.”

In what has been a shocking week for journalists, the Chief Editor and Publisher of a national daily Frontier Post Rehmat Shah Afridi was also arrested in Lahore on Sunday, October 7. According to reports Civil Lines Police stormed Afridi’s office, took him away and put him in lock up. Afridi was taken into custody due to a case registered under section 506 of Pakistan’s Penal Code, on a complaint lodged by his estranged son Muhammad Jalil.

The IFJ said: “We join the PFUJ to condemn the appalling murder of our colleagues Nadeem Hyder and Yaqoob Shehzad and we send our deepest condolences to their families and colleagues. We appeal for the government to leave no stone unturned in this case and to ensure that those responsible answer for this horrific crime.”

The IFJ also calls on authorities to release Rehmat Shah Afridi from police custody and resolve the allegations against him.