UN report on Sri Lanka and Freedom of Expression 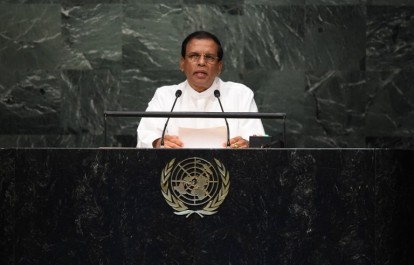 Earlier in September, Ruki Fernando was in Geneva as the reports of the UN Office of the High Commissioner for Human Rights (OHCHR) released the longest page-report (251 pages) narrating the horrific stories of unlawful killings and enforced disappearances out of Sri Lanka.

Having been investigated himself under the grounds of terrorism Act, one which the OHCHR report has called for reviews. Ruki accounts a personal involvement and knowledge as he writes about the new UN report, its pros and cons, and how it could affect the cases of missing Sri Lankan journalists like Subramanium Ramachandran and Prageeth Ekneligoda as well as freedom of expression at large.

In early September, I visited the parents of Subramanium Ramachandran, a Tamil journalist from Jaffna who has been reported as missing since February 200, having been last seen at an Army checkpoint[1]. There has been nothing heard since and his parents, now in their 80s, still desire for truth and justice, but appeared to have given up hope that their son will return.

From Jaffna, I went on to Geneva. There the anguish of Ramachandran’s parents and many other families and survivors, was brought alive through the reports of the UN Office of the High Commissioner for Human Rights (OHCHR)[2]. The longer 251 page report (OISL) narrates horrific stories of unlawful killings, enforced disappearances, arbitrary detention, torture, sexual and gender based violence, attacks on civilians in places such as hospitals and churches.

It highlighted reprisals against those seeking to challenge and question authorities in order to expose the truth and seek justice, which journalist Ramachandran had tried to do. It revealed denials, failures to carry out investigations and prosecutions such as in Ramachandran’s disappearance. It highlights inadequacy of domestic mechanisms and recommended a special hybrid court with international judges, lawyers, prosecutors and investigators, as well as actions by member states of the UN.

The OHCHR report also called for review of the Prevention of Terrorism Act – under which I was arrested last year and I am still under investigation. A gag order restricting my freedom of expression is still there, after having given interviews to BBC, CNN another media outlets. Many other journalists, opposition politicians, clergy and activists have been arrested and detained under this draconian law, which has been and is still being used to curtail dissent and free expression.

As the UN report was being released, I was sitting next to families of disappeared (journalists), including Sandya Ekneligoda, wife of disappeared Sinhalese journalist Prageeth Ekneligoda, outside the meeting room in the UN, as we were not allowed to go inside. I tried my best to translate the High Commissioners remarks through the webcast to Sandya. Prageeth’s case was mentioned in both reports. Sandya had waged an unrelenting battle for truth and justice, including giving testimony to the OHCHR. She welcomed the report, emphasizing the importance of looking at the past to move forward.

The OISL report detailed the killing of the Sunday Leader[3] editor Lasantha Wickramatunge, the series of attacks on the “Uthayan”[4] and the alleged detention, murder and desecration of the dead body by the Army, of the well-known LTTE female TV presenter Isaipriya. Ramachandran’s was amongst the many such cases that were not mentioned by name. The reports highlighted the widespread, systemic and repeated targeting of media known to be critical of the government over an extended period of time, insufficient protection offered to media workers who faced recurrent attacks and how this led to self-censorship and exile in fear of their lives, as well as fact that the number of journalists and media workers killed was amongst the highest in the world.

The report however appears not to have dealt with the connection between free expression and broader patterns of serious violations. For example, it has not emphasized the lack of access and restrictions for independent media during the last phase of war or even after the war and how this and the general repression of freedom of expression prevented serious violations being highlighted. The UN reports also doesn’t recognize the widespread use of state and private media to discredit independent-minded journalists, press freedom activists and others critical of the government, which hampered their ability to report freely and also led to exile and self-censorship and the fact that a large proportion of journalists killed during the period were Tamils.

The reports noted that “surveillance, interference and harassment of human rights defenders continued to be reported from the district level” in 2015, despite a “significant opening of space for freedom of expression at least in Colombo”. Indeed, few days before the launch of the reports, Police in North and East obstructed peaceful signature campaigns for a petition to the UN.

The OISL report emphasized the importance of an environment where victims and witnesses can participate without fear in transitional justice mechanisms and that such a climate does not yet exist. Truth seeking, memorialization, prosecutions will depend on the extent to which people, particularly survivors and victims’ families feel free to express themselves without fear of reprisals.

Media will have a major role to play in covering these processes independently. It will have to report the contents of the OHCHR reports, reactions or lack thereof in a responsible manner. This will depend on the extent to which media can function independently, without threats, restrictions or political interference.

[2] News release with summary at http://ohchr.org/EN/NewsEvents/Pages/DisplayNews.aspx?NewsID=16432&LangID=E (The report is divided into two parts which are interlinked: The overarching Report of the Office of the United Nations High Commissioner for Human Rights on Promoting Reconciliation, Accountability and Human Rights (A/HRC/30/61), available at  http://www.ohchr.org/EN/HRBodies/HRC/RegularSessions/Session30/Documents/A_HRC_30_61_ENG.docx and the accompanying report of the OHCHR Investigation on Sri Lanka (A/HRC/30/CRP.2) which can be found at  http://www.ohchr.org/EN/HRBodies/HRC/RegularSessions/Session30/Documents/A_HRC_30_CRP_2.docx

[4] A Jaffna based Tamil newspaper with the highest circulation, which had consistently criticized alleged abuses by the government and the military against Tamils

Ruki Fernando is a Sri Lankan writer and human rights / press freedom advocate. He has a court order restricting his freedom of expression in relation an ongoing investigation on anti-terror charges. His writings are available at www.rukiiiii.wordpress.com