Union calls on government and employer to support widow’s family 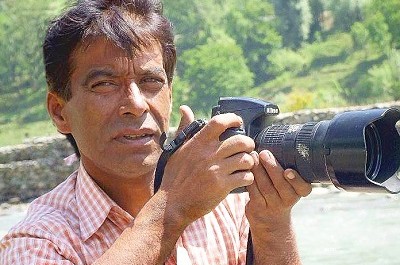 The International Federation of Journalists (IFJ) and its affiliates the Indian Union of Journalists (IJU) urge the Jagaran Prakashan Limited, the publisher of Dainik Jagaran, and state government of Jammu and Kashmir of India to provide compensation to family of late photojournalist Shafat Sidiq.

Well-known photojournalist of Kashmir Sidiq, 40, was on assignment for Dainik Jagran, a Hindi daily when he went missing in the floods on September 7. His body, with his cameras still hanging around his neck, was found five days later.

He is survived by wife Yasmeen, 18-month-old son Mohammad, ailing father Mohammad Sidiq, mother Saleema and two sisters. His family was dependent on his earning.

IJU President SN Sinha wrote letters to Omar Abdullah, Chief Minister of Jammu and Kashmir, and Mr Sanjay Gupta, Editor and Chief Executive Officer of Jagaran Prakashan Limited, urging to provide immediate assistance to the bereaved family. The IJU noted that Sidiq had died a brave death by heeding the call of duty in most challenging circumstances and that his family deserves the sympathy and support of all.

The IJU said: “Sidiq was working as a stringer for Dainik Jagaran for a long time and went out on to take pictures of floods after given an assignment by the publication. Sadiq may not have been your permanent employee and it would only be right that your office provides compensation to his family on both compassionate and professional grounds.”

During his 20-year career in journalism, he had also worked with the Srinagar daily Aftab, the Jammu-based Kashmir Times and the daily Amar Ujala.

The IFJ also urges the Dainik Jagran to come forward to support the family in all ways possible.

The IFJ Asia Pacific deputy director, Jane Worthington, said: “Sidiq’s family deserve the support from the media house for his long-term commitment to the media outlet, although all this time without a contract. Dainik Jagaran should come forward with support on professional and humanitarian grounds.”