Where Bangladesh is heading? 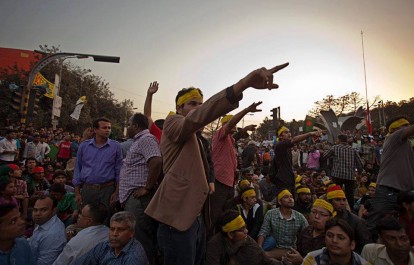 Bangladesh is probably passing through one of its most fragile hours since its inception by walking in a pitch-black tunnel with no ray of light to be seen on either sides.

After a brief period of continuous assassinations of foreigners, progressive bloggers, writers and publishers followed by attacks on religious minorities last year, 2016 was expected to be a promising fresh start in term of safety for the people of the South-Asian country.

But starting with the brutal murder of atheist blogger Nizamuddin Samad earlier this month followed by the killing of liberal professor Rezaul Karim Siddique and the latest hacking to death of two LGBT activists including the country’s first gay rights magazine’s editor Xulhaz Mannan, all the promises now look very pale.

US-based terrorist movement monitoring organisation SITE keeps telling either the transnational militant groups — Islamic State or the Al-Qaeda in Indian Sub-continent — are responsible for the spate of murders while Bangladesh government kept denying the claims and instead blaming homegrown Islamist militant outfits, who are also banned.

The home minister Asaduzzaman Khan Kamal this week boldly said: “”Murders are happening everywhere in the world. The law and order situation in Bangladesh is better than many developed countries.”

He added that the recent murders (of bloggers) are few of the “isolated incidents” and mentioned the incidents as “international conspiracy”.

Dear minister! That doesn’t console the people at all! Plural numbers of “isolated incidents” prove the consistency of such events.

A little kid’s bedtime story usually consists of a consistent but imaginary beast under the bed and the kid wouldn’t know it forever till s/he grows up! Are Bangladeshis that kid?

The Prime Minister is indiscriminately pointing her finger of blame towards the main opposition party and its alliance for the murders while her opponents keep blaming the government for failing to maintain security situation in the country.

Police is arresting “criminals” in connection to the murder cases but publishing only a few words to the media due to the “sake of investigation”. That also keeps the people confused and scared of whether to believe the law enforcers.

People are scared, simultaneously, fuming on the social media questioning their security. Though most of them are afraid to speak out publicly. The entire country looks like an entire world of chaos itself.

Meanwhile regular criminals are exploiting the ongoing situation. By shouting “Allahu Akbar” (God is the Greatest) after committing a murder doesn’t necessarily prove the assailants are Islamist militants. But it surely turns the law enforcers’ attention from the actual thugs to the militants who might or might not exist.

Culture of impunity is one of the most-discussed issues in Bangladesh. The government must prove its maturity by taking up the recent murder cases very seriously. Instead of bragging about how steady the country is (which is questionable to the outer world) it must take up responsibilities more seriously.

Rather than flapdoodling on these grave issues it must pay attention to put a full-stop to the rally of deads.

The author, Sam Jahan, is a Bangladeshi journalist.