#WPFD2018: Media Reforms – the Present and Beyond 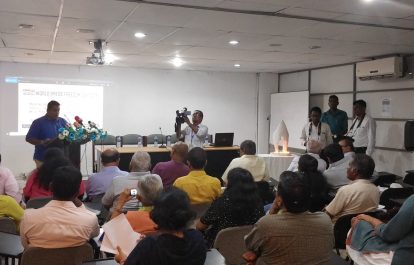 Delivering the keynote address at the World Press Freedom Day event on May 2, 2018, organized by the Free Media Movement at the Sri Lanka Press Institute, MJR David provides a succinct analysis of media reforms in Sri Lanka.

There have been many efforts to develop proposals for media reform, and several reports have been produced. Yet, there have not been many concrete outcomes.

It may not be unreasonable to conclude that this frustrating scenario has contributed to a loss of direction within the media landscape. Broken promises and lost opportunities are the hallmark of the media reform agenda of Sri Lanka.

Media reform has always ranked high on the political agenda at election time. An analysis of the recent past revels that free media and reform has been a key pledge across the board for all political parties. The initiatives taken towards media reform range from protest, civil society initiatives, election manifestos, internal review of state media, government commissions and public interest litigation.

Many of the proposed reforms are recommendations that are yet to become a reality and there cannot be much debate on that proposition that the project of media reform has failed badly.

In 2015 a key pledge to the media was that journalists would not be harmed, but this pledge was broken. Since the election of the new government the number of attacks on journalist have decreased although not satisfactorily eliminated. A number of those who are responsible for silencing the media by killing and abducting journalist and media workers are yet be held accountable for their acts.

On the front of legislation enacting the Right to Information Act certainly deserves praise and moves to regulate the electronic media in a consultative manner are underway. Other than that, legislative reform has not made progress. Likewise, media education and training is very much below acceptable standards.

In a context where society has not been able to get its basics correct is there any use of lamenting that reforms of a higher order have not been carried out?

On the other hand, there is a popular belief that our political managers of post-independence Sri Lanka have failed miserably in delivery of pledges. One could question whether it is logical to repeatedly blame those who have frequently failed? Would it not be better to explore alternatives?

But before we explore alternatives lets reflect on the failures or less than successful experiences of media reform. Here are some of the reasons I have heard from the community of media professionals and journalists on the failure of the media reform agenda:

Given all of the above, do we then abandon media reform and allow market forces, social forces and the industry to operate on an auto-pilot mode?  Or are we to push harder for the reformist agenda to succeed? Or are we to allow technological innovation to dictate the media agenda?

These are certainly questions that require answers, but in this instance, a change of approach is suggested. At risk of over-simplification, the new approach could be a change from a linear approach to one of complexity that takes into account diverse situations, scenarios and no fixed answer or end goal. The complexity approach recognizes that outcomes are less than predictable and that diverse outcomes emerge as the process evolves. There are expected outcomes as well as unexpected outcomes.

The media is not one single entity but a collective of multiple universes. It is not many voices in one world, but many voices and many worlds. There is not one question but many questions and many answers, while some questions have no answers. It is a scenario of multiple realties that sometimes act in concert and some act independently or indifferent of each other. In this context a serious rethinking of the media reform agenda is proposed.

At least five elements of a media reform ecology could be identified to be integrated within a complexity approach:

A complexity approach should be able to manage tensions that emerge within the interaction of these elements in a manner that would fulfill at least some of the needs and aspirations of the stakeholders.

It must be noted that a shared vision of change among stakeholders will help to achieve certain goals, while a space for the inevitable difference of opinion and disagreement among stakeholders must also be created. These differences need to be treated as a disruptive space that would contribute towards an enabling environment.

Is the Sri Lankan society ready for such an approach and willing to take up this dynamic challenge?