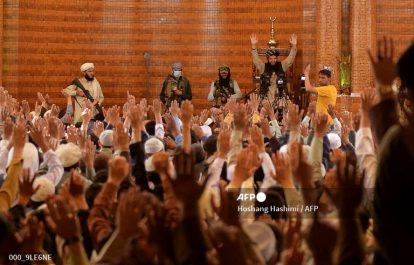 Armed Taliban militants raided the house of Zalmai Lotfi, the head of Enikaas TV, on August 20. The International Federation of Journalists and its Afghanistan affiliate the Afghanistan Independent Journalists Association (AIJA) condemn the attack and calls on Taliban leaders to respect the media.

According to the AIJA, Taliban militants raided the home of Zalma at around 10aam, searched for him and took away his car and other office equipment. It is reported that Taliban seized weapons from his house. According to AIJA, Zalmai had earlier gone into hiding fearing the possibility of an attack against him.

Despite conciliatory messages toward respect for press freedom by Taliban spokesperson Zabihullah Mujahid during his first press conference on August 17, intimidation, house searches and attacks on journalists and media are continuing behind the scenes. Taliban militants were reported as conducting search operations in homes of at least three employees of German public broadcaster Deutsche Welle (DW) and a freelance journalist and interpreter on August 18. The same day, Ariana TV cameraperson Mahmoud Naimi and Pajhwok News cameraperson Babrak Amirzadeh reported of being beaten up by Taliban militants in Jalalabad, in Nangarhar province while attempting to reporting on a protest against the Taliban takeover. On August 15, Radio Television Afghanistan (RTA) news anchor Khadija Amin and news presenter Shabnam Dawran were both removed from their posts and taken off air by the Taliban.A confidential United Nations document says the Taliban is currently intensifying the search for people who have worked with the US and/or NATO forces.

Enikass TV has been frequently targeted for its reporting over the past year. On March 2, 2021, female media workersMursal Wahidi, Sadia Sadat, and Shahnaz Roafifrom Enikass TV were shot dead by unknown gunmen in two separate attacks as they attempted to return home from work.  On December 10, 2020, Malala Maiwand, a female TV anchor for Enikass TV and Radio, was killed by gunmen in Nangarhar. Enikaas TV already shifted its operations from Ningharhar to Kabul due to constant security threats on July 11, 2021, but it has now halted its broadcasts

IFJ affiliates from around the world are continuing to send messages of solidarity and support to their colleagues in Afghanistan amid the chaos of the country’s fall to the Taliban on August 16.

The AIJA said: “These attacks are not only an attack on freedom of expression, but also a horrific act against media community and other citizens. The AIJA leadership believes that if such threats are not stopped, the work of the media and media personnel will be impossible.”

The IFJ said:“The unfolding reports of attacks on journalists and media workers suggest the conclusion that there is clearly no room to believe the rhetoric of Taliban leaders. The fear and anxiety of the media community and the global community of media workers is clearly justified. The IFJ urges the international community to take heed of these attacks and act quickly to evacuate the journalists most at risk.”

To help the IFJ support journalists in Afghanistan and those fleeing the country, donate to the IFJ safety fund