Delhi’s two black days of terror on the press 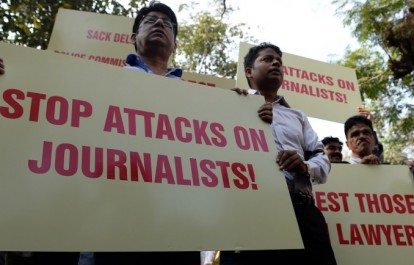 Visualize this. For two days, journalists covering news within the premises of the Patiala House Courts in Delhi were repeatedly attacked. They were targeted; and their mobile phones and tablets grabbed and smashed. Women journalists were among those who were deliberately attacked. On the first day, February 15, 2016, the attacks took place within a courtroom. Many of the attackers were men in lawyers’ robes.

This was in the trial court where a student leader was to be produced in a case of alleged sedition. Kanhaiya Kumar, president of the students union of the Jawaharlal Nehru University, had been arrested from the campus. He is accused of participating in a campus protest held to critique the hanging of a Kashmiri held guilty of attacking the Indian Parliament in December 2001. Journalists were not the only ones attacked; students and teachers of the University were also targeted. The Delhi police were present in substantial numbers but did not stop the attacks.

A few journalists were hospitalized. Most of them courageously reported the episode to their newspapers and on their news channels. At least nine journalists tried to lodge complaints with the police but these were not registered.

The journalist community was outraged and the following day they marched en masse to the Supreme Court to demand punishment for the attackers. Journalists and all supporting organizations deserve congratulations for the united march by members of the Press Club, the Indian Women Press Corps, the Press Association, the Kerala Union of Working Journalists and the Delhi Union of Journalists (DUJ). They received solidarity from the All India Newspaper Employees’ Federation (AINEF) and Andhra Pradesh Working Journalists Federation (APWJF).

However, the very next day, when the student leader was produced in court, journalists were again attacked and some of them were accused of being ‘anti-national’. The Police Commissioner described these episodes as ‘minor scuffles’.

As a journalist having spent almost 50 years in the profession and as the President of the DUJ, I was forced to comment sadly on the situation: “We are seriously concerned at harassment of journalists who have been covering the JNU imbroglio and the attacks on journalists even while doing their duty in the courts covering such incidents.”

As a citizen, I am increasingly anxious about attempts to resurrect the ghost of McCarthyism in modern India in the year of grace, 2016. (McCarthyism is the practice of making accusations of subversion or treason without proper regard for evidence. It also means “the practice of making unfair allegations or using unfair investigative techniques, especially in order to restrict dissent or political criticism”).

In the McCarthy era in America, many intellectuals ranging from liberals to communists of a variety of hues and even actors and actresses of Hollywood suffered greatly. In India today select journalists, teachers and students are becoming victims of such a tirade in a climate of intolerance created by right-wing groups.

Media intimidation is now on and definitely increasing in the last two years. In the last two days there are reports that Delhi police are intimidating reporters who cover the universities, particularly the JNU.

The intimidation of journalists should not be seen in isolation from the larger debate that is on. Intolerance and is on the rise countrywide as are assaults on the right to freedom of expression. There are increasing pressures on media persons from neo-liberal forces, select press barons and the government.

The DUJ has sent a written complaint to the Bar Council asking it to take action against lawyers who resorted to violence inside the court premises.

After the united march on 16 February, 2016, the DUJ Executive Committee decided to observe a “STOP PRESS BASHING DAY” on Saturday February 20, 2016. The meeting also approved of a memorandum that has been sent to the Press Council of India urging it to take suo-moto cognizance of the completely unprovoked thrashing of journalists on February 15 and 17, 2016.

The meeting also expressed deep concern at the biased coverage of the JNU incident especially by three TV channels, Times Now, Zee News and NewsX. The meeting observed that these channels have been telecasting doctored video footage, declaring students anti-national and whipping up pseudo-nationalist sentiments. It expressed concern at the rabble rousing antics of jingoistic TV anchors.

The meeting felt that in times of crisis the media has a greater responsibility to report objectively, without fear but also without favour and to create an atmosphere conducive to calm contemplation. It urged our colleagues in the electronic media to stop creating mass frenzy in the race for audience ratings.

Freedom of speech, and in particular, the freedom of the press, is, as Chief Justice BP Sinha stated in Dedar Nath Singh v. The State of Bihar (1962) AIR 955, “the sine qua non of a democratic form of government that our Constitution has established.” Despite this and many other high-minded declarations of the importance of journalistic freedom, the courts of India have given little actual protection to the journalists who regularly put their lives and reputations on the line to provide the public with current information. Instead, in almost every instance a journalist or his editor must risk the wrath of the courts whenever they publish on sensitive issues.

These are challenging times indeed.

The author S. K. Pande is the President of the Delhi Union of Journalists (DUJ).

Photo: Indian journalists shout slogans during a protest to condemn an assault on fellow media workers by lawyers at a court in New Delhi earlier this week, in Mumbai on February 17, 2016. Delhi police carried out fresh raids in several Indian cities on February 17 as they stepped up a search for students in a controversial sedition case after the arrest of a student leader that has sparked mass protests. AFP PHOTO/ INDRANIL MUKHERJEE