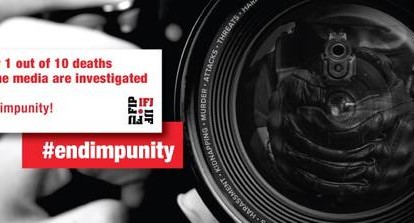 Today, the International Federation of Journalists (IFJ) Asia-Pacific, in coordination with its affiliates launches the three-week End Impunity Campaign for attacks against media workers.

In the Asia-Pacific in 2014, 39 journalists lost their lives in the line of duty – accounting for nearly a third of all journalists killed around the world. In 2015, 26 journalists and media workers have already been killed, including seven in the Philippines according to the IFJ’s killed list.

The campaign launches today November 2, the UN International Day to End Impunity for Crimes Against Journalists, and will run until November 23, the 6th anniversary of the Ampatuan Massacre in the Philippines. The 2015 campaign focuses on India, Pakistan and the Philippines, where government authorities have consistently failed to display a genuine commitment to ending impunity and bring perpetrators and masterminds to justice.

Week 1 of the campaign seeks to call the governments of India, Pakistan and the Philippines to account through a letter campaign, demanding action be taken to end impunity.

Week 2 will feature the launch of Without a Trace: Media workers missing in the Asia-Pacific – an online resources of key cases of media workers who have disappeared and remain missing.

Week 3 will focus on the Philippines which remains one of the world’s worst impunity havens for attacks against media workers, following the 2009 Ampatuan massacre and an ongoing, high levels of targeted killings annually. The IFJ campaign will also call on the governments of Cambodia, Nepal and Thailand to respond to the UNESCO Director-General’s report The Safety of Journalists and the Danger of Impunity, which they have so far failed to do.

The campaign concludes on November 23, the 6th anniversary of the Ampatuan massacre in the Philippines, when 32 journalists were among 58 people brutally killed while travelling in a political convoy in Maguindanao in Southern Philippines. The massacre remains the single deadliest attack on journalists in history, and to date not one conviction has been secured.

Social media action will be a major component of the campaign including a targeted campaign featuring political leaders of countries where impunity is rife, along with the hashtags #whatareyoudoing? and #EndImpunity. Globally, the IFJ invites everyone opposed to impunity for journalist attacks to join our social media campaign by sharing images and campaign materials on Twitter, Facebook and Instagram.

The campaign will feature stories from around the region concerning impunity each day. If you have a story, blog or report to share about a specific impunity case, please contact us on Facebook or at ifj@ifj-asia.org.