In any Kashmir emergency, why is Press always the first casualty? 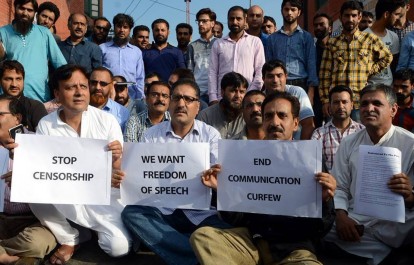 The current unrest in Kashmir marred by the worst kind of violence that the valley saw after six years has again raised serious questions about the freedom of press and journalists in this part of the world.

The Kashmir region located in the northwestern part of the Indian subcontinent, currently locked in a conflict between the two neighbouring countries of India and Pakistan has been simmering with violence over past 10 days after a top rebel commander, Burhan Wani was killed by Indian paramilitary troops on July 8, when the entire valley was celebrating the Eid-ul-Fitr.

What followed was a harrowing cycle of violence leading to the killing of 40 young men including security personnel and also leaving 1,500 odd people injured.

However, in what appears as a norm in the valley now is that in any kind of emergency, it is the local press, which is the first casualty. After the state government run by the Peoples Democratic Party and Prime Minister Narendra Modi’s Bharatiya Janata Party (BJP) failed to pacify the angry protestors on the streets, it resorted to curbing freedom of local newspapers in the valley.

During the intervening night of 15th and 16th July, the local police raided the offices of various newspapers in different parts of Kashmir. The newspaper employees were asked to hand over the newspaper copies to them and a few of them were even manhandled. The newspaper managements were later asked to stop printing for next few days.

This amidst the internet and mobile phone services ban, which has been abruptly imposed in the valley.

A government spokesperson made a statement a day later that the decision was made to ensure that there is no’ instigation of violence’ due to newspaper reports.

Even as the local newspapers were barred from printing, the government did not impose any restrictions on national newspapers (which are based in India) and their journalists.

The Kashmir-based journalists issued a statement on July 16, condemning the government action and later staging a silent sit-in demonstration.

In what could only be called as a mockery of the journalism profession, the government instead asked the journalists to ‘stay at home for some time.’

Editor-in-chief, Rising Kashmir, one of the popular dailies in Kashmir, Shujaat Bukhari reportedly called the government decision as an undemocratic one.

“The J&K Govt’s faith in press-gag being an effective Weapon of Mass Destruction (WMD) to curb civil unrest is misplaced, going by past precedent; In fact, it is more likely to backfire,” Mohammad Sayeed Malik, a veteran journalist commented.

“Cable TV operators allowed to resume work but told to block Pakistani / other illegal channels. But what about Srinagar newspapers? Are they also ‘illegal’?,” questioned Yusuf Jameel, a senior journalist who also works with Indian newspapers, Asian Age and Deccan Chronicle.

Despite the intimidation, gags, and other restrictions, the newspapers carried out their internet editions the following day. Although the ban on the newspaper gag is likely to be lifted by June 19, the unannounced bans on the press in Kashmir every now and then are raising doubts over the claims of democracy by the Indian government in Kashmir.

Fourth Estate (Press) has always been referred to as an important pillar of democracy and without its freedom, the nation can be anything but democratic.

The author, Bismah Malik, is a journalist working for the India edition of International Business Times. She has previously worked with The Tribune and Kashmir Times newspapers in Srinagar. She also contributes to the SAMSN blog and tweets at @bismahmalik