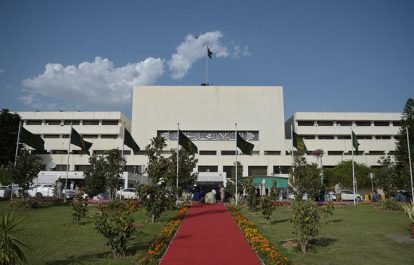 Pakistan’s senate standing committee on information and broadcasting passed amendments on August 26 to the Press Council of Pakistan Bill (2020) and the Pakistan Electronic Media Regulatory Authority ‘ordinance’. The amendments opens up the chairperson role of the press council to journalists, while the ordinance takes stronger focus on labour contracts in media houses. The International Federation of Journalists (IFJ) and its affiliate the Pakistan Federal Union of Journalist (PFUJ) call on Pakistan’s authorities to ensure that media rights are not breached in the name of resolving labour issues.

The Press Council of Pakistan Amendment Bill 2020, introduced by Pakistani Muslim League (Nawaz) senator Javed Abbasi, effectively abolishes a provision requiring the appointment of a retired Supreme Court judge as chairperson of the council and opens it up for journalists, lawyers or retired judges of any court. The amendment also provides that the maximum age limit of the chairperson as 60 years.

The approved amendments in the PEMRA ordinance now empowers the Pakistan Electronic Media Regulatory Authority (PEMRA) to enforce and ensure the employment contract between the media house and media workers, including journalists. Under Section 30 of the PEMRA ordinance, the PEMRA is empowered to monitor the employment status of journalists and media workers in TV channels and take necessary actions for breaches.

Pakistan has faced ongoing negative focus on labour rights in the country’s media, given the country’s high number of journalist deaths due to stress-related issues connected to non-payment of salaries, widespread media sackings and other labour issues that have plagued the industry for several years.

The new PEMRA ordinance is now expected to tackle a well-catalogued list of labour issues in Pakistan’s media such as employment without contract, illegal sackings, leave without pay and partial salary payments.

PFUJ secretary general, Rana Muhammad Azeem, said: “We welcome these amendments and hope it helps to resolve the issues of contract and salaries of the media workers in the electronic media.”

The IFJ said: “The IFJ and the PFUJ have strongly campaigned on the dire labour situation facing media workers in Pakistan and welcome a focus to labour rights in the country’s media industry. However, given PEMRA’s history of encroaching the spirit of free press and freedom of expression, the IFJ seeks strong assurances from PEMRA will not breach media rights in taking on this role.”