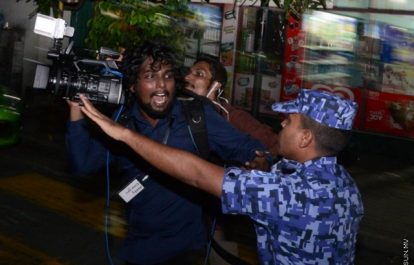 Welcome to the monthly e-bulletin of the South Asia Media Solidarity Network (SAMSN). The next bulletin will be sent on September 15, 2017, and your inputs are most welcome.

We encourage contributions to let others know your activities and to seek solidarity and support from SAMSN members for your campaigns and activities. To contribute, email Ujjwal Acharya at: ifjsouthasia@gmail.com 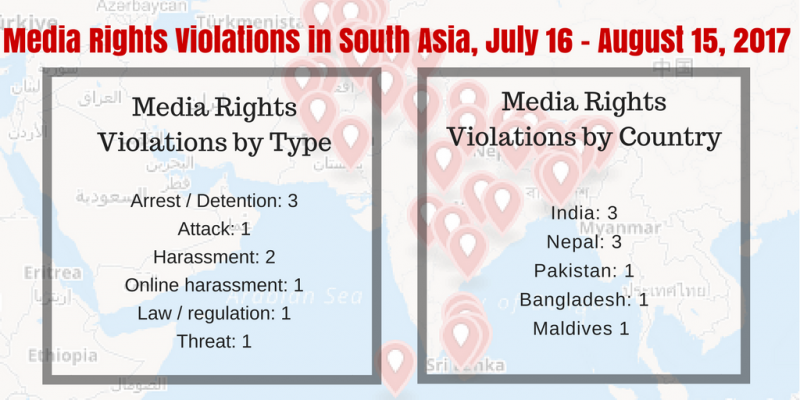 Dhanya Rajendran, a senior journalist and editor-in-chief of digital news platform The News Minute, was mentioned more than 30,000 times in Twitter abusing her for her tweet about a movie. It all began on August 4 after she tweeted that she couldn’t bear to watch actor Vijay’s Sura after the interval.

Ramesh Rath, a Balipatna based journalist working for Pragativadi, an Odia-language daily was attacked by two bike-borne miscreants with a sharp weapon in the late evening of August 7 in Odisha. Rath sustained a deep cut on his back.

The journalist said: “I was sitting in front of my house when the two bike-borne youth came. Seeing them coming towards me, I asked them if anything was wrong but the person sitting on the back seat suddenly attacked me with a sharp weapon. I could not identify them due to bad light.” The attackers fled the scene immediately. The police is investigating the case. Read more here.

Chakka Bahadur Malla, district correspondent for Image Channel TV, was arrested and taken into custody by the police in Bajura, western Nepal on July 20. He was in the process of registering a case with the police after he was attacked along with four municipal officials of the Budinanda Municipality on July 13. A gang attacked them near the district headquarters. Malla received injuries and was recovering when he was arrested after a police complaint was registered against him. Read more here.

Saba Bajeer of Channel 24 TV and Aitzaz Hassan of Dawn News were manhandled and illegally detained for an hour by Federal Investigation Agency (FIA) officials at the Pakistan Institute of Medical Sciences (PIMS) where they were on assignment. The FIA had brought Securities and Exchange Commission of Pakistan (SECP) Chairman Zafarul Haq Hijazi for a medical check-up after his arrest. Bajeer took photos using her cell-phone when FIA official approached her, grabbed her by the arm and asked her to delete the photos.

The FIA official then started pushing Hassan, on whose suggestion Bajeer had proceeded to delete the photos. Hassan’s mobile phone and cards were then snatched. The journalists were taken to an empty room of the PIMS and detained for an hour without giving them access to phone. They were released after other journalists at the venue protested. Read more here.

Police raided the office of Nepali-language satellite TV channel, ABN, on July 22 night, asked the employees to vacate the office, stopped the broadcast and sealed the office. They were acting on the complaints lodged by Darjeeling district cultural and information department. The police alleged that the employees of the media house shared the news about the ongoing demonstrations in Facebook after telecasting the news, instigating agitators to turn more violent. The channel is also accused of telecasting objectionable news and programmes, according to a report. Read more here.

The Election Commission on July 31 issued a circular to the Press Council of Nepal ‘to present the chief editor of the Deshantar weekly before the EC within three days’ for clarification on two news items that the constitutional body claimed to be ‘false’ and ‘baseless’. The news items in question were published on July 23 and 30 accusing the EC of financial misconduct. The EC also directed PCN to take action against the Chief Editor Kabir Rana. Read more here.

Gopal Khadka, the Managing Director of the Nepal Oil Corporation (NOC), threatened journalist Dilip Paudel of Nagarik daily in the premises of the Ministry of Supplies on August 4, where Paudel was on a reporting assignment. Khadka told Paudel: “You have a family, be careful.” Paudel had first reported misappropriation of funds by Khadka while buying land for NOC. The Parliamentary Public Audit Committee had ordered an inquiry into the matter, concluding that proper procedures were not followed while buying the land. Read more here.

In the early hours of August 1, the police arrested Abdul Latif Morol, a local correspondent for Bangla-language Daily Probaha in the coastal town of Dumaria, about 200 km south of capital Dhaka. The police were acting on a criminal complaint lodged by Subroto Faujdar, the Dumaria correspondent with a rival newspaper Daily Spandan, and a supporter of the ruling party. The complaint alleged that Morol’s Facebook post amounted to defaming Minister for Fisheries and Livestock, Narayan Chandra Chanda.

Two days earlier, on July 30, the Minister was officiating at an event organized by the government’s local livestock department in Dumaria, during which livestock – goats, chickens and ducks – was donated to poor farmers. Local newspapers reports that one of the donated goats died soon thereafter, prompted Morol to post on Facebook “Goat given by state minister in the morning dies in the evening.” Read more here.

At least seven journalists – four from Sangu TV and three from Raajje TV – were arrested and a number of others roughed up by the Maldives police on charges of ‘obstructing the duties of a law enforcement officer’ on July 26. The media reported damage to the camera and other equipment while the videos showed that police used excessive and unnecessary force against the journalists reporting the rally organized on the 52nd Independence Day of the Maldives.

Over the past four months in Bangladesh, more than twenty journalists have been sued under a controversial law prohibiting digital messages that can “deteriorate” law and order, “prejudice the image of the state or person,” or “hurt religious beliefs.” Although its authors may have intended for this part of the law to be used sparingly, it is now routinely used to suppress freedom of speech and harass writers, activists, and journalists, often for their comments on social media. Read more here.

The Daily Star of Bangladesh also published an article outlining the dangers of the ICT Act. It states: At least 21 journalists were sued under section 57 in the last four months amid growing demand for repeal of the provision which is wide open to misuse. Though the law minister on several occasions said the section would be scrapped, cases filed against journalists under the provision are on the rise with their leaders as well as rights activists terming it a tool to muzzle the press and freedom of expression. Read more here.

Pakistan was reviewed for the first time by the UN Human Rights Committee on July 11 and 12. RIDH spoke to the Secretary General of the Pakistan Press Foundation (PPF) and the Campaigns and Advocacy Coordinator at IFEX about the examination in regard to freedom of expression issues in the country. Read more here.

Verbal abuse and veiled threats against journalists online have become so common that one imagines trolls are constantly lurking under a journalist’s desk, ready to pop up as soon as he or she presses “publish”. For the last three years, IPI has examined the psychological toll that extreme cases of online hatred take on journalists, and analyzed the identity and behaviour of aggressors. IPI research identifies four areas of work: Registration, community management, attacks on social media and psychosocial support. Read more here.

India encodes freedom of expression as a constitutional right under Article 19, though it is a heavily qualified prerogative. Laws classified in the constitution as “reasonable restrictions” to freedom of expression are numerous, broad in scope, and, according to a 2016 Human Rights Watch report, “prone to misuse”. Activists, journalists, lawyers and academics are concerned that free speech in India is deteriorating. Read more here.

The press does not have any exclusive right or special privilege to comment, criticize or make imputations or allegations which are sufficient to ruin a citizen’s reputation, a Delhi court has said. Further, journalists do not have greater freedom than others, the court said, reminding journalists that they have to be more responsible as they have power to disseminate information.

The court’s order came as it restrained the managing editor of a magazine, Mercantile Samachar, from publishing any libellous articles against a man who alleged that he was defamed. It also directed the magazine editor and another person to pay Rs 30,000 and Rs 20,000 respectively to the man as “symbolic damages”. Read more here.

Since mid-May, the cyber wing of Pakistan’s Federal Investigation Agency has arrested dozens of people under the newly enacted Prevention of Electronic Crimes Act, 2016 for criticizing the government on social media. The crackdown was ordered by Interior Minister Chaudhry Nisar Ali Khan. The ratification of the Prevention of Electronic Crimes Act (also known as the Cyber Crimes Law) solidified a vague and vast definition of what constitutes an “internet crime”. Read more here.

On August 8, 2014, journalist Ahmed Rilwan went missing and since then the friends and family of Rilwan are asking questions about his whereabouts. On August 8, the family and friends of missing Minivan News journalist Rilwan held a Suvaalu March (Question March) to mark three yeas since his disappearance and police cracked down on the march snatching banners and placards and arresting nine people. Chants of “Where is Rilwan?” were met with pepper spray. On August 9, Superintendent of Police Ahmed Shameem announced that the Major Crimes Investigation Centre would re-open the investigation into Rilwan’s disappearance and promised to conduct “deeper probes than before”. Read more here.