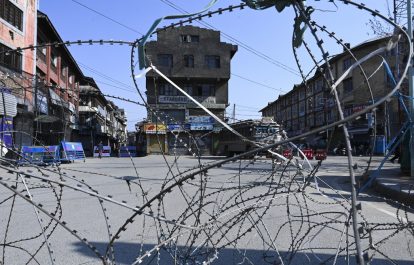 A group of 37 national media unions from South Asia as well as global media advocacy and freedom of expression organisations today called for an end to the ongoing communications blockade in Indian-administered Kashmir. The International Federation of Journalists (IFJ) and the South Asia Media Solidarity Network (SAMSN), together called for the Indian government to immediately restore all communications to the Kashmir Valley.

On April 3, the Jammu and Kashmir government once again extended its ban on 4G high-speed mobile internet services in the region through to April 15. It is the tenth time the ban has been extended since a judgement from India’s Supreme Court on January 10 ruled the indefinite communications shutdown in Jammu and Kashmir as “impermissible”.

The IFJ and SAMSN said as long as the ban on high-speed internet remains in place, it continues to prevent media workers from carrying out their professional duty to inform the public at a critical time.

The IFJ-SAMSN’s campaign, POSTCARDS FROM KASHMIR, is shining a light into the experience of journalists living through the world’s longest communications shutdown in a democracy. The shutdown commenced on August 5, 2019, when the Indian government unilaterally abrogated Article 370 of the Constitution of India which gave Jammu and Kashmir limited autonomy and put the region under an unprecedented communications lockdown. The shutdown suspended internet, mobile phones and fixed telephone lines, making Kashmir the world’s biggest “information black hole” and causing acute agony and pain to its people. While communications have been gradually lifted since the January Supreme Court ruling, controls on high-speed mobile internet remain.

With the recent outbreak of the Covid-19 pandemic, monitors for freedom of expression and freedom of the media are raising concerns for Kashmir’s seven million people when internet access is critical. The state-owned high speed Broadband internet is available to just 20,000 subscribers in Kashmir. Private internet service providers’ subscribers are mainly commercial establishments and media houses, and therefore cover just a few thousand media workers, while the remainder of the region’s population including journalists mainly dependent on mobile internet.

The IFJ and SAMSN international action with the International Freedom of Expression Network (IFEX), today sees 37 co-signing organisations call on the Indian federal government and the Jammu and Kashmir state authorities to:

The IFJ said the Jammu and Kashmir government has repeatedly extended the ban on mobile internet. In February the ban was extended until February 24, then March 4, March 17, April 3 and now April 15.  Meanwhile, Directorate of Health Services in Kashmir, on April 1, directed government officials and health workers not to speak against government efforts to combat the Covid-19 to social media and to the press.

Journalists in Kashmir say they have been unable to access information on the pandemic to disseminate to the public, severely restricting the ability of medical professionals and citizens to response to the health emergency. As well as basic journalism functions outlined above, the controls also prevent:

“Journalism is vital to stop the spread of fake news, myths and sensationalized stories, at a time when verified information put out by professional journalists in credible media houses could make the difference between life and death,” the IFEX global statement said.

POSTCARDS FROM KASHMIR launched on April 5 to building understanding and awareness on the impact of the world’s longest and most severe communications shutdown on journalists and media operations as well as the wider community in Kashmir.

SAMSN said: “The extension of the internet shutdown by Jammu and Kashmir administration is not only against the human rights of freedom of expression and people’s right to information, but it is a serious violation of health rights amid the Covid-19 outbreak.”

IFJ said: “With the outbreak of Covid-19, the availability and dissemination of reliable information is to prevent spread of the virus in Kashmir. The IFJ demands the Indian federal government and the Jammu and Kashmir administration revoke the unfair and dangerous ban on high speed internet, and guarantee the free movement and operation of journalism in Kashmir.”