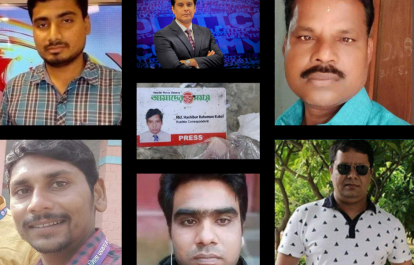 On International Day to End Impunity for Crimes Against Journalists on November 2, the International Federation of Journalists (IFJ) and the South Asia Media Solidarity Network (SAMSN) called on South Asian governments, journalists, media workers associations and media rights groups to support the adoption of a UN Convention on the safety and independence of journalists and other media professionals.

In 2022, the IFJ has documented the killings of eleven South Asian journalists. Most recently, on October 24, Pakistani senior journalist Arshad Sharif was shot dead by law enforcement in Kenya after fleeing Pakistan. Sharif had been living in hiding after allegedly receiving death threats for his critical reporting.

Five other Pakistani journalists have also been killed in 2022, including senior journalist and president of the Shorkot Press Club, Muhammad Younis, who was killed by two gunmen in the Punjab province on August 27, Ifitkhar Ahmed, who was shot to death outside a mosque in Charsadda on July 2, Ishtiaq Sodhoro, who has shot outside his house in Kumb on July 1, senior journalist Zia-Ur-Rehman Farooqi, who was killed by armed assailants in Punjab’s Khanewal district on April 28, Capital TV crime reporter Hasnain Shah, who was gunned down by an unidentified armed group on January 24.

In Bangladesh, journalist Hashibur Rahaman Rubel was found dead in a river in his home district of Kushtia on July 7. DBC News journalist Abdul Bari was found with stab wounds on his neck and stomach near Dhaka’s Hatirjheel Lake on June 8, while Cumilla district newspaper reporter Muhiuddin Sarka Nayeem was shot on the India-Bangladesh border on April 13.

In India, Odisha reporter Rohit Biswal was killed by an improvised explosive device on February 5, while Subhash Kumar Mahto was shot by unidentified assailants outside his home.