Forging strategies for media change in the Asia-Pacific 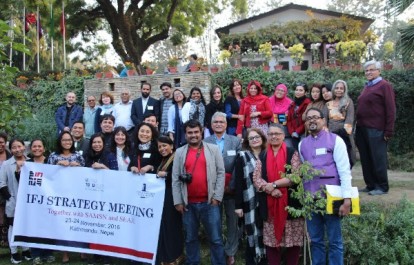 Journalist unions from across the Asia-Pacific resolved to share knowledge, utilize new technologies, and strengthen membership to effectively continue their struggle for press freedom and journalists’ rights, at the International Federation of Journalists (IFJ) Strategy Forum in Kathmandu, Nepal on November 23 and 24.

Representatives from the International Labor Organization (ILO) and Twitter shared knowledge and skills to effectively use social media in union works, combat online harassment and remain safe in the digital space.

Together, leaders and activists discussed strategies to enhance press freedom, union strengthening, and adapting digital tools in union work as well as campaigning on freedom of expression in the internet and fighting impunity using new media. Resolutions were passed demanding journalists’ rights, gender equity, press freedom, and end to impunity.

The meeting endorsed the resolution adopted by the FES-IFJ Gender Meeting, on November 21 and 22, which said, “Change has to come from within unions in order to make a real impact in the wider media environment. Unions must lead and make gender equity a priority and endorse the significant work being done by women and men activists towards furthering gender equity.”

On India, the resolution demanded: “The immediate enactment of a Journalists’ Protection Act at the national level and other mechanisms to address the suffering of families of slain and attacked journalists. The impunity of perpetrators, which has a devastating effect on press freedom in India must end forthwith.”

The resolution also called for amendments in the Working Journalists Act to include the entire media compass; and stringent action against earring media management for non-implementation of statutory wage awards.

Expressing solidarity with the journalists of Kashmir, India, the meeting strongly condemned the attacks and restrictions on media reporting of the Kashmir conflict, in particular the arbitrary ban on the Kashmir Reader daily newspaper. “We also condemn the restrictions on the use of internet and mobile phones in the conflict-affected Kashmir Valley, which affects newsgathering and dissemination,” said the resolution, which also called urgently for peace and regretted the firings by security forces on unarmed people, including the use of pellet guns that have blinded many civilians, including children.

The meeting stood in solidarity with colleagues from the Philippines to commemorate November 23, 2009, when 32 journalists were massacred in Ampatuan, now acknowledged as the single deadliest attack on the press on record.

“Even as colleagues from the Philippines are both chasing elusive justice and are feeling besieged. Seven years after the Ampatuan massacre, we continue to be anxious about the safety of our Philippine colleagues as they go about uncovering and reporting the travails of their national community. The solidarity declaration is an assurance that the international media community is solidly behind them as they dare speak truth to oppressive power.”