Against all odds: Reporting from the Maldives 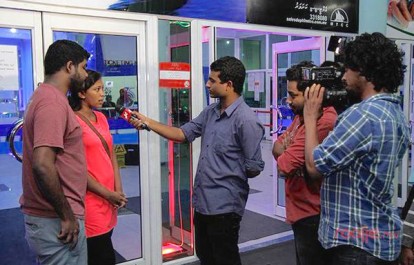 Harassed, arrested, prosecuted and even violently attacked, journalism has never seen such gloomy days in Maldives since an iron clad monopoly on Freedom of Speech and Expression, and Freedom of the Media was released from its shackles in the late 2000s.

Though the Maldives, now guarantees Freedom of Expression, Freedom of Speech and Freedom of the Media under its newly enacted constitution, the reality is not as upbeat.

Journalists face daily harassment from government authorities, political activists and violent street gangs for reporting on stories that are inconvenient to a paranoid regime.

Especially journalists from RaajjeTV are singled out for harsh treatment; the only reason being that RaajjeTV strives to bring the perspective of the oppressed, expose scandalous acts of corruption, standing firm in our belief of a public duty to inform.

In 2013 RaajjeTV studios and its master control room were set ablaze, in what will remain the most gruesome attack on press freedom in the Maldives. Although, the arson attack might be offset in its cruelty when you consider the earlier attack on RaajjeTV’s then Head of News Ibrahim Waheed, which almost took his life.

The 2013 attacks followed a pattern of systematic abuse that was often left uninvestigated, ranging from threats of violence to the occasional arrest of journalists for the most absurd of reasons.

In October 2015, three RaajjeTV journalists were arrested and physically abused by Maldives Police Service. The police has continued to deny the physical abuse, but medical reports corroborate that abuse took place.

In late 2015, while covering an opposition tea party, police detained and released, journalist Murshid Abdul Hakeem. Despite video evidence of Murshid being detained in the back of a police truck, Maldives police maintains that they never detained the journalist.

Rights and freedoms – especially of the media – have gradually been restrained in the Maldives since the election of President Abdulla Yameen.

The concept of a free media is profoundly new to the Maldives. The media was allowed to operate freely in 2007, after several decades of censorship during which journalists were often tortured for reporting against the status quo.

Up to 2012, Maldives made dramatic steps towards establishing a truly free press, during which Maldives moved up in the Reporters Without Borders’ World Press Freedom Index.

In the following years, press freedom in the Maldives regressed radically, with attacks on media allowed to continue with impunity.

Today the media has been restricted to pavements and behind police lines as police officers harass media personnel with impunity. Senior government officials and MPs continue to spread hate speech against journalists, specifically targeting journalists that are labelled “pro-opposition.”

As this downward spiral continues, Maldives Broadcasting Commission and Maldives Media Council remain helpless at best or complicit in the restriction of free press at worst.

Last week saw another episode in this reprehensible saga, as a sports editor of RaajjeTV, Hussain Fariyaz was arrested for taking a photo. Fariyaz was on his way to work when he saw a police team remove two empty bottles of alcohol from the street adjacent to RaajjeTV premises, naturally, he stopped to take a photo.

Police officers on the scene immediately stopped him, enquired why he was taking photos – this despite the fact that it would be legal for any member of the public to photograph police conduct their duties in a public place.

Minutes later, the same police team barged in to RaajjeTV premises unannounced – without a warrant – and “snatched” Fariyaz, assaulting him in the process.

Hours after Fariyaz’s release police issued a press release saying that Fariyaz was arrested for “disobeying police orders” – a charge bandied around whenever the police don’t have a legal rationale for arrest – and for “fleeing the police.”

This is where the safety of journalists become a cliché.

In an unforgiving sea of polarized, partisan politics; calling out one side of the masses while at the same time effectively alienating the other side – often with rhetoric bordering on bigotry – the cries for media freedom become unoriginal.

Despite and even in spite of these odds, RaajjeTV has thrived. What we ask for is simple, the guarantee of our constitutional rights, a safe environment for our journalists to continue an important public service and for the authorities to end impunity for the countless attacks on journalists. This is vital for Maldivian media to turn a new page for the better.

Mohamed Junayd A. Saleem is a Station in-Charge at RaajjeTV, the only dedicated news station in the Maldives. He has been working in the Maldivian media industry since 2007, and has witnessed the changes in Maldives since the enactment of a new rights based democratic Constitution in 2008.