Riding the Waves of Repression: State of Press Freedom in the Maldives 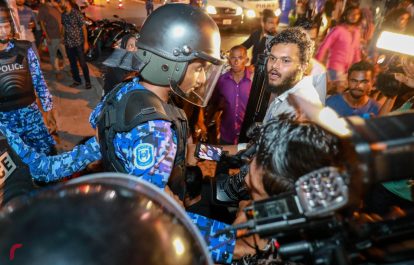 Maldives is weathering a severe political crisis following the Supreme Court’s February 1 order to release political prisoners and reinstate 12 Members of Parliament. President Abdulla Yameen declared a state of emergency and cracked down on all protests. The media and journalists are facing a challenging situation. The South Asia Media Solidarity Network (SAMSN) is monitoring the situation and this live blog will be updated with important information related to press freedom, media and journalist’s rights.

The IFJ has issued statements (here and here) and together with RSF and CPJ a joint statement on the situation in Maldives calling government to respect rule of law, press freedom and journalists’ rights.

The 45-day state of emergency ended.

Raajje TV journalist Mohamed Fazeen, who was arrested near a demonstration calling for President Abdulla Yameen’s release in capital city Malé, released. The journalist was arrested in ‘disobeying police orders’.

The only thing that scares a dictator more than free expression is free media. This is because they can’t allow the people they have subjugated to be informed; the people can’t question things that they don’t know, right? #FreeWisam #FreeAmir #FreeFazeen #JournalismIsNotACrime

Human rights & fundamental freedoms, including the freedom of expression & the right to fair trial should be respected. EU encourages all stakeholders to work with the UN to facilitate such a dialogue & EU is ready to support UN facilitation. #Maldives @Europarl_EN #Urgencydebate

The UN Human Rights Council expressed ‘grave concern’ over the deteriorating human rights situation in the Maldives, saying that it is ‘regrettable’ that the Government of Maldives ‘has chosen not to engage constructively with this body [UN] and its mechanisms’. A joint statement narrated at the 37th session of the UN HRC, supported by 41 countries, states: “The statement stressed the need to respect the rights of peaceful assembly and freedom of expression, the importance of independence of the judiciary and emphasized the need to uphold constitutional guarantees for human rights.”

Our website @IndependentMV is down again after attacks to server intensified following live blog.