Welcome to the monthly e-bulletin of the South Asia Media Solidarity Network(SAMSN). The next bulletin will be sent on October 15, 2018, and your inputs are most welcome.

We encourage contributions to let others know about your activities; to seek solidarity and support from SAMSN members for your campaigns and initiatives. To contribute, email Ujjwal Acharya at:ifjsouthasia(at)gmail(dot)com 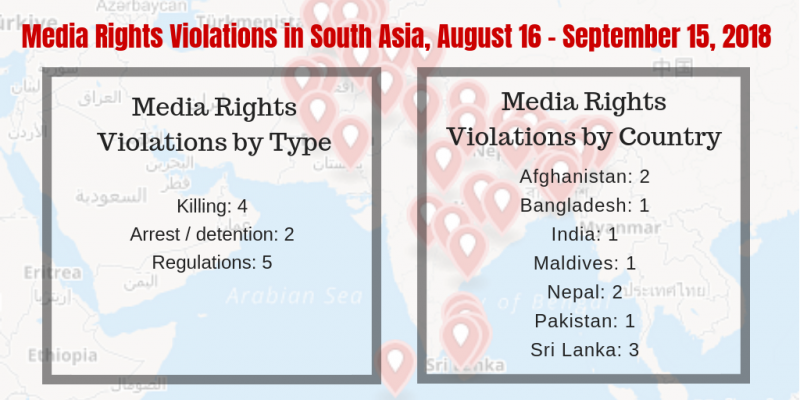 In a deadly month for South Asia, four media workers were murdered in Afghanistan, Bangladesh and Pakistan. These murders bring the total number of journalists killed in South Asia in 2018 to 25.

Two television journalists were killed and another five injured in a brutal twin blast in Afghanistan’s capital, Kabul, on September 5. Journalist Samim Faramarz and cameraman Ramiz Ahmadi of TOLO News lost their lives as they reported at the scene of an earlier suicide attack. The initial bombing targeted an evening sporting event. The journalists were killed in a second explosion, an hour after the initial blast.

The twin attacks killed at least 25 people and injured 80 others. The Islamic State is reported as claiming responsibility. Among the wounded were five other journalists:  Amanullah Farhang of 1TV, Khaled Nekzad, Sayer Yunusi and Hussain Rastemanish of Khurshid TV, and Jamshid Ahmadi of Maiwand TV.

Suborna Nodi, 32, the Pabna correspondent for Ananda TV and a journalist for the Daily Jagroto Bangla newspaper was horrifically attacked and hacked with a sharp-edged weapon by as many as ten assailants at approximately 10pmon August 28. She was rushed to Pabna Medical College Hospital but was declared dead on arrival. The murder is not believed to be work-related.

Journalist Muhammad Abid died on August 23 as the result of injuries he sustained during an attack in Borewala Tehsil, Punjab of Pakistan. Abid, 25, a local correspondent in Dewan Sahib town was allegedly attacked by two men in the evening on August 22. The assailants, Tahir Hussain and Muhammad Imran, had targeted Abid for exposing some alleged wrongdoings by the men. Abid sustained serious head injuries in the attack and later died in hospital.Read more here, here and here

2. Editor arrested and charged with militancy in Kashmir, India

Indian police arrested and detained the assistant editor of the Kashmir Narrator over alleged militancy crimes and held him for six days without charge. Police arrested Asif Sultan for questioning at his home in Jammu and Kashmir on the evening of August 27. He was illegally detained for six days and was questioned about stories he published in the magazine. Following concerns raised by journalist unions, Sultan was finally presented to court on September 1 but remanded in custody until September 22 for his alleged involvement in militancy-related incidents. Read more here.

Ahead of presidential elections in the Maldives on September 23, allegations have emerged of foreign journalists been denied visas to cover the elections. On September 12, the joint opposition issued a statement expressing concerns over reports that several international journalists had had their applications for visas to cover the presidential elections rejected.  On September 13, the Elections Commission refuted the allegation, saying that of the 37 applications received before the August 14 deadline, 11 were rejected due to insufficient documentation. Read more here.

Raju Basnet, the editor-in-chief of Khojtalash weekly, was arrested on September 10 from his home at Godavari Municipality, Lalitpur, in the Kathmandu Valley. The office of the Metropolitan Police Range said that he was arrested under court order reportedly over a news report about pressure being exerted by lawmakers to illegally sell government-owned factory land. He was charged under the Electronic Transaction Act 2008. He was released on bail after five days of custody. Read more here.

A novel, a radio drama and a stage play all come under attack in Sri Lanka for allegedly containing anti-Buddhist or offensive language. The Office of National Unity and Reconciliation was forced to amend the titles of several episodes of a radio drama after monks and other hardliner religious organizations labeled the titles of some of the radio drama’s episodes as anti-Buddhist and an insult on the religion. The performance certificate of the playMama Kelin Minihek was also revoked by the Public Performance Board; and reinstated only after some of its ‘anti-Buddhist’ dialogues were changed.Sinhala novel Budunge Rasthiyaduwa, by K.K Srinath, was also attacked for its “anti-religious’ title. Read more here.

Nepal’s new Criminal Codes Act 2018 curtails freedom of expression and the press. The new Act along with the Civil Codes Act 2018 became law on August 17, 2018, replacing 15 laws including 55-year-old civil and criminal laws. Some provisions of the Act, especially Sections 293 to 308 relating to privacy and defamation, are restrictive to the press freedom and criminalize expression.Read more here.

Critical media houses and independent journalists in India are facing growing pressure and harassment from ruling authorities and their supporters at the detriment of democratic principles. A resolution of the National Executive Committee of the Indian Journalists Union (IJU) said that the Central government as well as some state governments were misusing their power to pressure and financially cripple critical media. Read more here.

a. India’s media and journalism today, by Sidharth Bhatia [Video]

Sidhartha Bhatia, one of the founding editors of The Wire, delivered the special talk on the state of Indian media and journalists during the meeting of the International Federation of Journalists (IFJ) Asia Pacific in Kathmandu, Nepal on June 19, 2018. Watch the video here.

Although the new Act is much more comprehensive than earlier laws, they still leave space for the misuses. The Act does not speak on media or press, thus there are chances of cases being registered for investigative stories and critical stories. The motive of journalism is to bring forward information intended to be hidden, and such work could be punished or at least journalists are harassed by registration of complaints. Read more here.

9. Afghanistan: The slaughterhouse of journalism [CNN]

The war in Afghanistan has changed in many ways since its start in 2001, when the US attacked the Taliban and drove them out as a result of the 9/11 terror attacks. But now, in addition to its other horrors, the Afghan war has a new, cruel and senseless face: The mass killing of journalists. Read more.

10. Acts of Intimidation: In Pakistan, journalists’ fear and censorship grow even as fatal violence declines [CPJ]

As killings of journalists in Pakistan decline so too does press freedom, as the country’s powerful military quietly, but effectively, restricts reporting by barring access, encouraging self-censorship through direct and indirect acts of intimidation, and even allegedly instigating violence against reporters. Journalists who push back or are overly critical of authorities are attacked, threatened, or arrested. Read more.

11. Police books Kolkata journalist over a tweet [The Scroll]

Indranil Roy, an entertainment journalist with the Bengali daily Sangbad Pratidin, was questioned by the Kolkata Police, ostensibly for tweeting that an upcoming film starring Bengali actor and Trinamool Congress Member of Parliament Deepak Adhikari has been copied from a Pakistani film. Read more.

The Sampadak Parishad (Editors’ Council) expressed its surprise, disappointment and shock at the final report of the Parliamentary Standing Committee on the Post, Telecommunication and ICT Ministry on the draft Digital Security Act. The Council said the report, “totally ignored” the protests and concerns expressed by journalists and media organisations. Read more.

13. Journalist shot dead in dacoity in Pakistan [The Nation]

Journalist Saeed Butt was shot dead by unidentified dacoits in Abdul Hakeem, Khanewal, Punjab. Two dacoits entered Butt Medical Store, the business point of journalist Saeed Butt, made him hostage at gunpoint and looted cash and a mobile phone. They also opened firing on the journalist when he put up resistance. Read more.

It has only been two weeks since Nepal’s new Penal Code criminalised photography, slapped heavy fines and jail terms for recording conversations, and announced strict punishment for sending, receiving or using online data. Another privacy-related bill in Parliament will prohibit people from publishing personal information of public officials. But it has already had a chilling effect across the Nepali media. Read more.

15. Journalism, ‘Fake News’ and Disinformation: A Handbook for Journalism Education and Training [UNESCO]

Developments in the last few years have placed journalism under fire. A range of factors are transforming the communications landscape, raising questions about the quality, impact and credibility of journalism. At the same time, orchestrated campaigns are spreading untruths – disinformation, mal-information and misinformation – that are often unwittingly shared on social media. This handbook explores the very nature of journalism with modules on why trust matters; thinking critically about how digital technology and social platforms are conduits of the information disorder; fighting back against disinformation and misinformation through media and information literacy; fact-checking 101; social media verification and combating online abuse. Read more.

If you have information on a press freedom violation or matters relating to media freedom and journalists’ rights in South Asia, contact staff at IFJ Asia-Pacific so that action can be taken. To contribute to this bulletin, emailifjsouthasia(at)gmail(dot)com